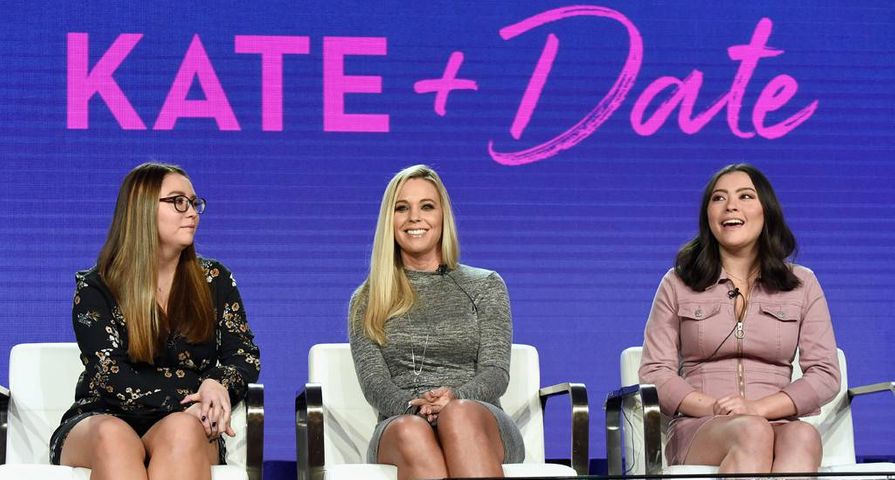 It has now been over a decade since TLC launched the Gosselin family into fame with Jon & Kate Plus 8, and in that time a lot has changed.

A bitter divorce between Jon and Kate Gosselin left Kate with her own show, Kate Plus 8, and now she is documenting her leap back into dating with TLC’s newest Gosselin series Kate Plus Date. The 43-year-old and her 18-year-old twin daughters Mady and Cara appeared at the TCA panel in Los Angeles to discuss the new show.

The President and General Manager of TLC, Howard Lee, introduced the Gosselin women and the new show. “Almost 10 years after her divorce and with diapers, bottles, and sleepless nights a thing of the past, Kate Gosselin is ready to find love or, at least, like,” Lee told the crowd. “With the help of professional matchmakers and her college-bound daughters Mady and Cara, Kate dives back into the dating pool.  She puts it all out there, the good, the bad, and the super awkward.”

The twins went on to add that they are fully supportive of their mom trying to find love again.”We’ve been nudging her to date for years,” Mady explained. “We’re all, all eight of us, are so glad that she finally is.”

Kate went on to talk about her new show, revealing that her daughters’ opinions meant a lot and that a lot of the time she felt “awkward” and many of the dates were “hit or miss.”

Her dating pool expanded to New York City and other places in order to “cast a wider net,” but she felt it was important to “stick close to home in terms of looking for people.”

Another high priority for Kate was that the show is appropriate enough to “not  feel cringey and uncomfortable” when and if her kids tune in. “I’m not a teenager, clearly,” she said. “I’m 40-something and there’s no other mom dating show out there.”

She also took times to defend her decision to have basically raised her kids on a reality TV show. “I feel like, more than anything, it has enriched their lives,” she said of her kids being on TV. “It has made them world-wise and taught them a lot about people’s intentions I think more so than other kids their age.”

She also insisted,  “We are close with all of my kids, their brothers and sisters.” The comment is of course after it was revealed that her ex-husband Jon Gosselin recently won temporary sole legal and physical custody of one of the sextuplets, Collin, who Kate had sent away to a live-in facility for his “learning disabilities” without Jon’s knowledge. Jon Gosselin won the custody when Kate didn’t show up to their court date.