John Travolta Gets Close (And Creepy) With ScarJo And Idina Menzel 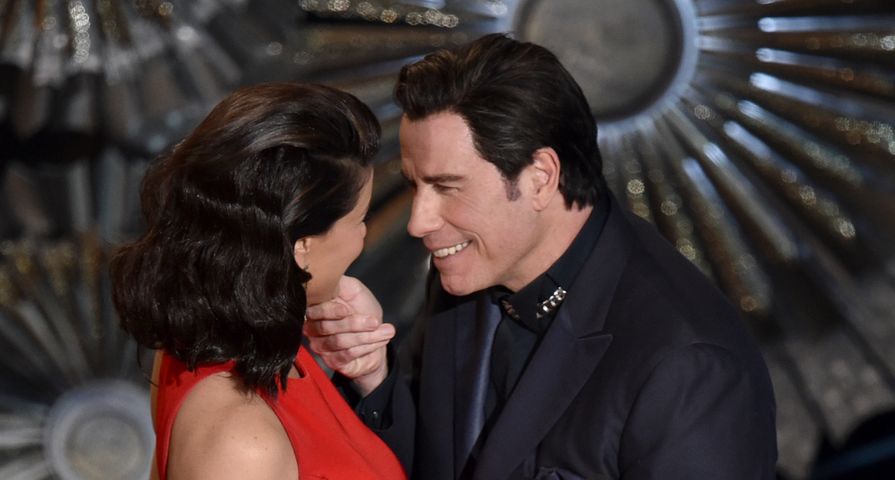 …or should it be Adele Nazeem…?

Oh, John Travolta. What is up with you, man? The more you appear in public, the easier it is to believe all of the outlandish stories that surface about your personal life, marriage-for-show and your closeted penchant for other men-folk.

And the hair pieces. Sweet mercy. Can you not just be yourself? It’s all unnecessary.

Forgive my line of questioning and accusation. John Travolta was once a personal hero in the entertainment industry. After the career resurrection (killing his role in Pulp Fiction), he hit a streak of really great work. Then the stories began flowing of his “phoning in” performances by not even memorizing lines, etc. Then… the really odd stories from the marriage to Kelly Preston, and the role of Scientology in their lives.

Then… the last five years took place, and everything started to become rather clear. Still, you wanna hold out hope for the guy who once defined “being cool.” Darn it all if the last two Oscar celebrations haven’t killed any remaining doubt as to the utter oddity that John Travolta is–or offering the benefit of the doubt–has become.

There were some weird stories from the past few years involving John Travolta and Scarlett Johansson when they were working together. Scarlett said John was too inquisitive about her personal life, including intimate details of sexuality. Last night, he sneaked up on ScarJo–who looked exquisitely green on the red carpet–and he popped a kiss on the cheek after rubbing his hand across her waist.

It got all the better when he and Idina Menzel were onstage together to present an award, and last year’s name flub became a bit… him going total improv and holding and stroking Idina’s face. So freakin’ odd.

Need more? Who doesn’t? Check out the video below.