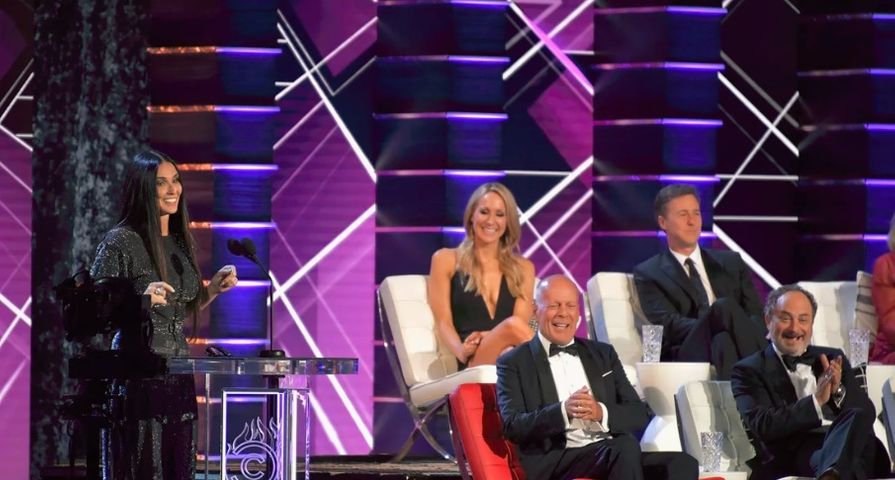 There are a lot of ex-spouses who would love the opportunity to insult each other all in the name of good fun, and Demi Moore took full advantage when it came to the roasting of her ex-husband Bruce Willis.

The Comedy Central Roast of Bruce Willis was taped on Saturday, July 14 at The Hollywood Palladium and Moore, who was married to Willis for 12 years, made a surprise appearance near the end of the taping to make sure she got her shots in.

“For those of you that don’t know me, I am Demi Moore,” began the actress. “I was married to Bruce for the first three Die Hard movies, which makes sense, because the last two sucked.”

She then took aim at Willis’ parenting styles when it comes to the couple’s three daughters, Rumer, Scout, and Tallulah who were all in attendance for the roast of their father. “Bruce is super generous. When our daughter Rumer was a baby and it was his turn to change the diaper in the middle of the night, he would lean over and whisper to me, ‘I’ll give you a thousand dollars right now if you change that diaper.’”

“Scout asked me not to say anything, but just last week he offered her a thousand dollars to change his diaper,” said Moore. “Some things never change.”

Moore then made a controversial joke about Willis only getting his role in Pulp Fiction after paying a visit to Harvey Weinstein’s hotel room. “I was there for some special moments. Groundbreaking,” she continued. “Bruce got his career-breaking moment in Pulp Fiction, and it seemed really odd at the time, this big action star in a little indie film, but Bruce went over to Harvey Weinstein’s hotel, and I don’t know, but he came back and said, ‘I got the part!’”