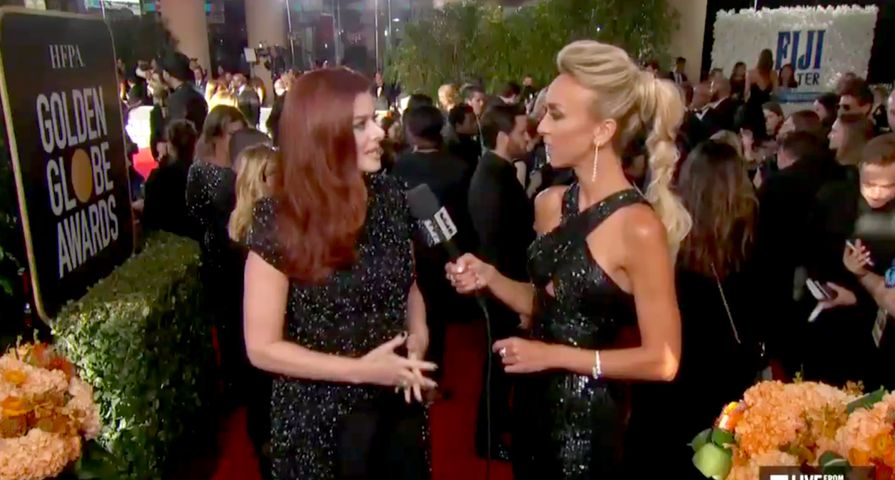 Leading up to the 75th Golden Globes on Sunday, January 7 there was no doubt that many statements were going to be made and many of the stars were going to stand up to the sexual misconduct and inequality that has plagued Hollywood and became the focus of the industry in 2017.

Of those making a statement was beloved Will & Grace star Debra Messing who called out the E! Network for allegedly not paying its former E! News co-host Catt Sadler equal to her male counterpart while doing a live interview with E!’s Giuliana Rancic while on the red carpet.

As previously reported, after 12 years at the network Sadler made the decision to leave E! News when she discovered that her co-host Jason Kennedy was making allegedly “double” her salary and “had been for several years.”

During the jaw-dropping interview, Messing was wearing all black to show her support for the Time’s Up movement in which men and women donned black to the major awards show as a movement to stand up to the sexual harassment pervasive throughout Hollywood, and Rancic opened the interview by asking Messing about her decision to take part in the movement. Messing responded, “I wore black to thank and honor all of the brave whistle-blowers who came forward and shared their stores of harassment and assault and discrimination.” She continued, ““I’m wearing black to stand in solidarity with my sisters all over the globe, and I’m wearing black to celebrate the rollout of this incredible initiative, Time’s Up.”

She then added, “Time is up and we want diversity and we want intersectional gender parity. We want equal pay, and I was so shocked to hear that E! doesn’t believe in paying their female co-hosts the same as male co-hosts. I mean, I miss Catt Sadler, and so we stand with her,” Messing said, “and that’s something that can change tomorrow. We want people to start having the conversations that women are just as valuable as men.”

Rancic decided not to comment on Messing’s pointed response and moved on to the next question, but the exchange quickly caught fire on social media with many praising Messing for standing up and speaking out. In response, Sadler released a statement: “I am immensely grateful for the outpouring of support today. Thank you to Amy, Debra, Eva, Brie, Julianne and so many more women using their voices on behalf of us all. Time’s Up.”