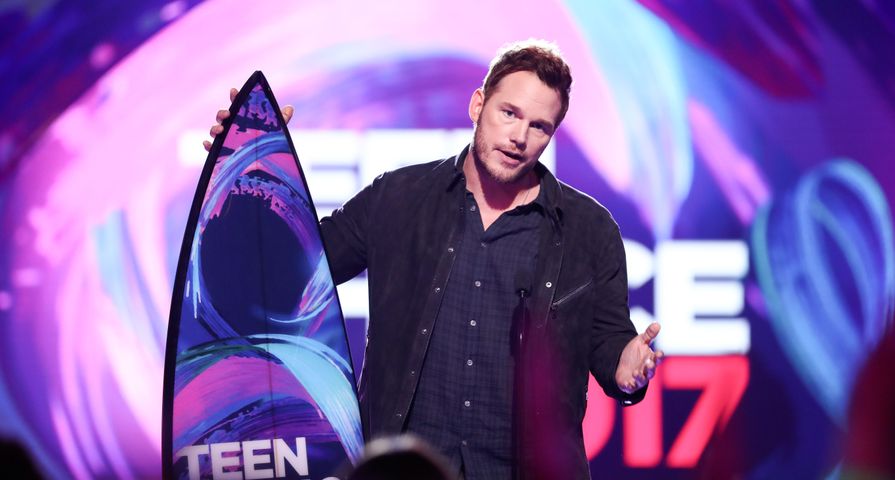 Just one week after the split between Chris Pratt and Anna Faris was announced, Chris took to the stage at the 2017 Teen Choice Awards marking his first on-stage appearance as a newly single man.

He took the stage to accept the Choice Sci-Fi Movie Actor Award for his role in Guardians of the Galaxy Vol. 2. He appeared in good spirits despite the past week of his split sending shock waves through Hollywood and raving fans. Pratt did not participate in the red carpet portion of the event, but did not show signs of sadness as he accepted his surfboard award. “Wow. Thank you! I love you, too. Thank you!,” he began. “What an honor and a privilege to be here at the Teen Choice Awards. Thank you, Millie, Maddie, Grace. Give it up for the gals.”

He then added a lighthearted anecdote: “When I came to Los Angeles, I came from Hawaii and I had all of this blonde hair and I was tan and I met an agent because I really wanted to be an actor and get an agent and he said, ‘Wow. Bro you must surf?’ And I said ‘Yeah’ and that was the first of many lies I told to get where I am today. Thank you.”

The split between Faris and Pratt was announced on their Facebook page last week. “We tried hard for a long time, and we’re really disappointed,” the message read. “Our son has two parents who love him very much and for his sake we want to keep this situation as private as possible moving forward. We still have love for each other, will always cherish our time together and continue to have the deepest respect for one another.”