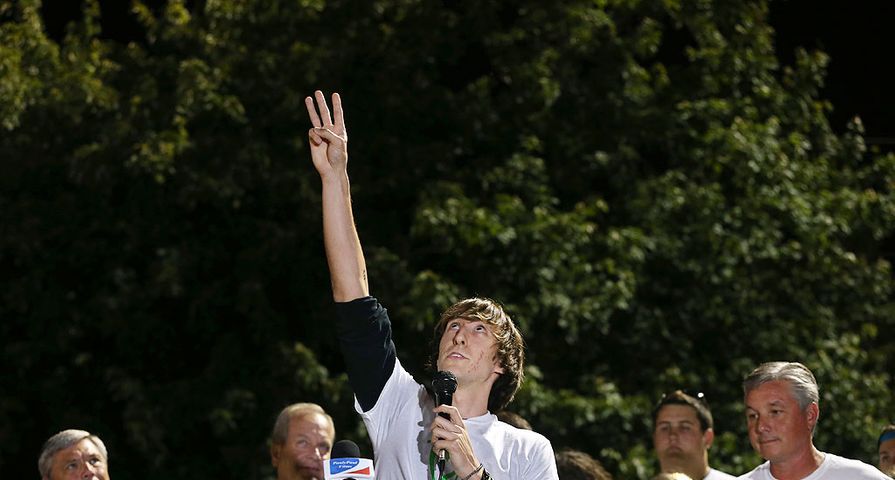 On Monday evening hundreds of people gathered to pay their respects to the late Christina Grimmie.

The 22-year-old The Voice contestant was tragically killed after a lone gunman opened fire in a concert venue in Orlando, Florida. Several mourners joined with Christina Grimmie’s brother, Marcus, for a candlelight vigil to honor the singer’s life. Marcus tackled the shooter after he attacked Christina, which police say may have helped save the lives of others around them.

He also talked about the support he’s received from people during this difficult time. “I have no words… I had five people fly out [to Orlando], my mom and dad – people bought them plane tickets. Adam Levine paid for Christina’s funeral. Selena [Gomez] is singing a song and crying.”

Christina’s brother also talked about the mass shooting that occurred just a small distance away from where his sister was killed. “About four miles away from where we were staying, there was a huge tragedy to Orlando, to the LGBT community and to the whole world. I mean, 50 people dead, who knows who is injured. I have no words. All of those people that died and are suffering,” he continued.

Marcus concluded his speech by expressing his gratitude to the crowd. “She’s in a better place…. Thank you to everyone once again. I wish I could elaborate more, you guys didn’t know her like I did, so thank you. This is awesome.”

On the weekend Adam Levine expressed his heartbreak at the passing of the singer, who he coached during season 6 of The Voice. “[My wife] Behati and I are absolutely devastated and heartbroken by Christina Grimmie’s tragic death. Our hearts go out to her family,” he posted. “Christina was a natural, a gifted talent that comes along so rarely. She was taken from us too soon. This is yet another senseless act of extreme violence. I am left stunned and confused how these things can conceivably continue to happen in our world.”