Bekah M. Reveals Arie Luyendyk Jr. Was Messaging Her After ‘The Bachelor’

The Monday, March 5 finale of season 22 of The Bachelor was one of the most dramatic and shocking yet after what was deemed to be one of the most boring seasons yet, and it seems the drama just keeps on coming for Arie.

For those who aren’t aware, the finale showed Arie breaking up with Lauren Burnham in Peru where he then proposed to publicist Becca Kufrin at the final rose ceremony. Unfortunately it didn’t take long for Arie to question his decision and on a weekend away to L.A., he broke up with Kufrin in order to pursue the feelings he still had for Burnham.

After all that drama aired, a former contestant Bekah Martinez then took to Twitter to blast Arie for direct messaging her on social media as recently as early February. The 23-year-old’s relationship with the Bachelor was a source of controversy during the season because of their age difference, but she still made it fairly far in the competition.

Martinez took to her Twitter to expose the DM’s sent to her by Arie, by posting screenshots of the exchanges, which she captioned with, “dm’ing your ex is a good look too @ariejr.” The screenshots showed an exchange on February 2 where Arie sent Bekah a photo of her face on a milk carton, making a joke out of the fact that Martinez had actually ended up on a missing person’s list after miscommunication of her whereabouts with her mother. Along with the picture, Arie wrote, This may just win the internet today. Such a shame they didn’t use your license photo.” Martinez responded with “lol I MADE THAT!” and “so there was no way in hell I was using the license photo…hahaha.” Arie replied, “So good. you seriously crack me up. Hope all is well.”

Martinez then shared the DM she got from Arie the very next day where he sent her a photo of himself with two women and wrote, “Just realized you were born the same year as my first 2-on-1.”

After many responded saying that the direct messages weren’t that bad from Arie or suggestive, Martinez tweeted, “yeah arie was probably being friendly but guess what I DONT CARE HAHAHA. BOY BYEEEE.”

dm’ing your ex is a good look too 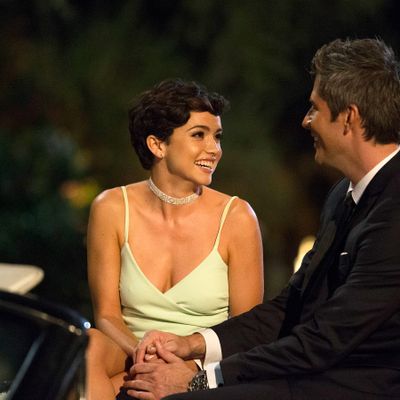