When it comes to Peter Weber’s newfound love with Madison Prewett, Peter’s mother Barbara isn’t afraid to speak her mind about their relationship.

On Tuesday night’s Bachelor finale, Barbara didn’t hold back on her opinions after Peter broke off his short-lived engagement to Hannah Ann Sluss to pursue a relationship with Madison.

“Of course I have my feelings,” Barbara told Bachelor host Chris Harrison, referring to her son’s decision. “The show last night didn’t show everything. I’ve gotten a lot of love in my DMs, but I will say, when I went for Hannah Ann, it’s because she’s the one who embraced me with love. She was just so loving towards me. I just loved her. The next day we met Madison. It started on a rocky road. She had us wait three hours for her to come in, she didn’t want to meet us. We had just come across the world and we were exhausted. We were getting used to the time there. We had to wait three hours.”

“When she did come in, we didn’t get an apology from her,” she continued. “When I proceeded to ask her if she was madly in love with my son, she said ‘No.’ And that she would not accept a proposal in four days. How do you expect a mother who loves her son with all of her heart to take that? As a mother, that wasn’t what we were expecting. Therefore, when I said I wanted Hannah Ann so badly, was because I knew. We just clicked right away. Unfortunately, we did not have that interaction with Madison.”

Following part one of the two-night Bachelor finale on Monday, Barbara received both praise and criticism from viewers on social media, largely due to her passionate plea for Peter to choose Hannah Ann over Madison.

When Hannah Ann confronted Peter on last night’s episode, Barbara was seen clapping her hands in support. However, when Madison told Peter that she loved him, Peter’s mother wasn’t impressed or convinced.

In response to Barbara’s feelings, Madison said she “can’t change the past.”

“There’s a lot that is out of my control,” Madison said. “I came into the journey saying I was going to be unashamed of who I am and undeniably myself and that’s something I’ve done this entire journey. I’m not a mom, so I don’t know what it’s like to have a son, to have kids. I have love and respect for Peter, therefore I have love and respect for Peter’s family. I will never say a negative word about anything.”

“We want the best for him,” Barbara responded. “I have to tell you, completely two different people. One was willing to compromise and the other one was not. You need both to compromise. Earlier Peter said, I gave my heart to two people. At that place, one only gave his heart to him and that was Hannah Ann. To me, of course, my love went to Hannah Ann.”

Madison quickly interrupted Barbara to give her her thoughts on the matter.

After Harrison asked Barbara how she and Madison can get through this, the energy in the room shifted.

“Chris, he’s going to have to fail to succeed,” she responded. “All his friends, all his family, everyone that knows him knows that it’s not going to work.”

At this point, Peter steps in to defend Madison.

“I’m telling you that I love Madison and that should be enough,” he said. “Please. Listen to me.”

“I hate this situation,” the Bachelor star’s father, Peter Sr., said. “It’s telling to me that there are so many obstacles in this way to even get to this point that you don’t even start a relationship like that. We saw a lot more than the average person here would understand that there are so many differences to overcome. When you’re getting into a relationship that beginnings should be the brightest spot and it was anything but.”

When it came to the two women to meet Peter’s family on Monday night’s episode, Hannah Ann’s introduction went smoothly while things didn’t go quite as plan for Madison due to her and Peter’s different lifestyles.

“I understand that you’re very religious,” Barbara told Madison on Monday’s episode. “Peter, he’s very spiritual, like I’m spiritual. But I just wonder how important it would be for you to have someone that’s on your same level of faith — because [Peter] is completely different. And Peter’s lifestyle, I don’t know if you’re aware of it, but he socializes, he parties.”

After meeting both contestants, Barbara broke down into tears to Peter, insisting that Madison wasn’t the right person for him and that he should choose Hannah Ann. 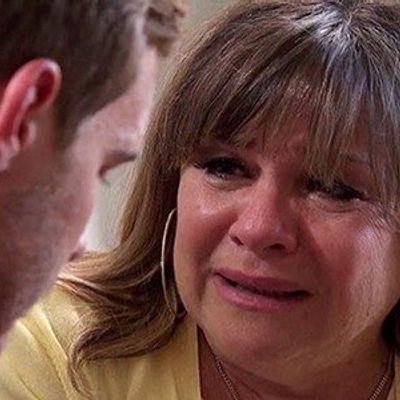