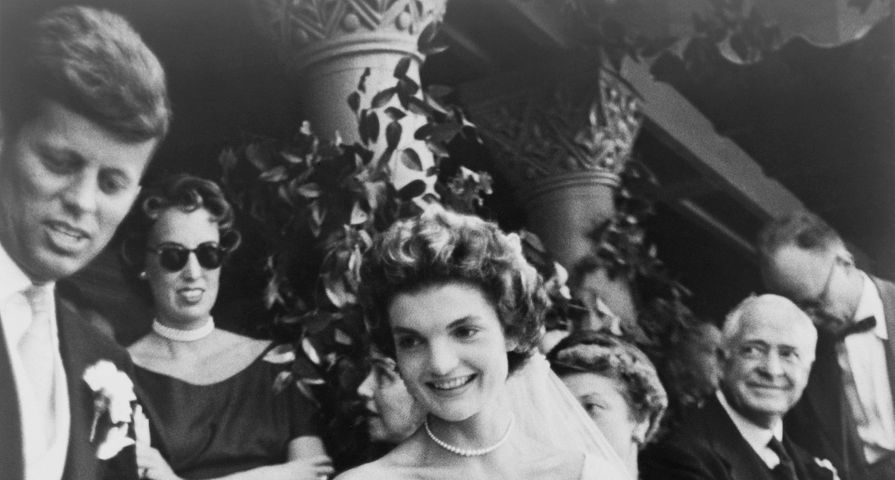 On September 12, 1953, New York socialite Jackie Bouvier married Massachusetts-born junior senator John F. Kennedy in what quickly became the social event of the season. Their wedding consisted of 800 guests and brought together some of the most elite senators and notables at the time. Jackie’s dress was an instant sensation and has been one of the most beloved wedding dresses of all time with its off-the-shoulder neckline and heirloom rose point lace veil. Although you’d never know it by looking at how smitten and happy the couple looks in the photos, there was actually a fair share of wedding drama happening behind the scenes, mostly due to her wedding dress! Follow along to learn 14 hidden details you didn’t know about Jackie Kennedy’s iconic wedding dress:

Jackie Kennedy’s iconic wedding dress was actually created by a designer that was lesser known at the time. Dressmaker Ann Lowe was hired to design the dress Jackie would wear, as well as the bridal party’s attire and Jackie’s mother’s dress. Lowe was exceptionally talented, which was clear from a young age while growing up in a family of dressmakers. Through the 1940s to the end of the ’60s, Lowe’s designs were society’s “best-kept secret” and her work became quickly acclaimed among socialities.

Despite her connections with high-profile notables such as Jackie Kennedy, Lowe remained largely unknown in the New York fashion scene. Back in the ’50s, black women working in high-fashion weren’t given the same credit as their white counterparts, which is why Lowe never fully received the praise she deserved until recently. When asked who made her dress, Jacqueline Kennedy would say it was made by a “colored woman.”

Jackie’s mother, Janet Lee Bouvier, was the one who insisted Jackie should hire Lowe to design her wedding dress, the entire bridal party’s looks, and her own mother-of-the-bride attire. Lowe had made Janet’s dress for her own wedding in 1942 to Hugh Auchincloss and after such a positive experience, she insisted Jackie work with Lowe as well.

11. A water pipe burst and destroyed the original dress

Even the Kennedy wedding didn’t go off without a hitch! Just 10 days before the wedding, a water pipe burst and flooded dressmaker Lowe’s Madison Avenue studio. The accident destroyed Jackie’s dress that Lowe and her team had been working diligently on for two months. Lowe immediately ordered more ivory French taffeta, pink silk faille and worked around the clock until the ceremony to ensure Jackie looked perfect walking down the aisle in a fresh Lowe design.

10. Flood also destroyed 10 of 15 garments required for the wedding

Since Lowe was also working on dresses for the bridal party, unfortunately, it wasn’t just Jackie’s dress that was destroyed by the flood. Ten of the 15 garments she was working on were actually damaged, which meant that Lowe and her team definitely had their work cut out for them as they hustled to recreate the dresses in time for the wedding with only 10 days to spare.

After the water pipe fiasco, Lowe ended up going into debt trying to reconstruct a new dress from scratch. “She bought more fabric, hired people overtime and just swallowed all the lost money [after the accident],” author Deborah Blumenthal explained. To make matters worse, Lowe was significantly undercharging for her garments without even realizing it. At the time, she charged just $500 for Jackie’s ensemble when her competitors would have likely charged around $1500 for a similar dress. She ended up incurring a total loss of $2200, which almost bankrupted her business.

Lowe’s debt became such a burden that she eventually had to close her studio due to outstanding costs. She got herself into a hole of debt and taxes, totaling nearly $12,800, but suddenly got a call from the IRS informing her that an “anonymous friend” took care of all her outstanding fees. Lowe later shared that she had a strong feeling it was Jackie who rescued her during her time of financial crises since the two remained close throughout the years. “[She] was so sweet,” Lowe shared about Jackie to the Saturday Evening Post in 1964.  “She would talk with me about anything.”

7. The Dress was quite traditional for the time

Jackie’s dress was actually quite traditional for the ’50s and accurately reflected the common bridalwear of the era. Allegedly the Kennedy family requested that the dress be quite conventional, and especially when it came to having a full, bouffant skirt. The ivory silk taffeta gown also featured a portrait neckline, interwoven tucking bands and tiny wax flowers embroidered throughout.

6. The Gown was made with 50 yards of fabric

Although traditional in nature, the bridal gown itself was actually quite extravagant when diving into the details. The gown was made from 50 yards of ivory silk taffeta and was quite intricate with the pleating, off-the-shoulder portrait neckline and full bouffant skirt. The bodice of the dress was fitted and the skirt was embellished with flounces and swirls made of ivory-colored faille. To complete the ensemble, Jackie wore a rose-point lace veil and a pair of white gloves.

5. The Dress was well received by family and the public

When Jackie walked down the aisle, her Ann Lowe dress became an instant sensation. The dress was highly approved by the Kennedy family and was also well received by the public. It was an instant icon and the American public fawned over the dress for years as one of the most memorable bridal looks of all time.

4. Jackie herself wasn’t a fan of the dress

Despite how well-received the gown was by the public, Jackie herself later admitted she wasn’t a fan of the dress. As a young bride, she felt pressure from her mother and the Kennedys to wear something elaborate, but she admitted she would have much-preferred something simple and sleeker with clean lines to complement her tall, slender figure. She critiqued the dress’ neckline because she felt it simply emphasized her small chest and said that she felt the skirt looked “like a lampshade.”

3. The dress was displayed at the Kennedy Library

In 2003, the iconic Kennedy wedding dress was displayed at the JFK Library and Museum to commemorate the 50th anniversary of their wedding. Supposedly this was one of the few times the dress would go on display because the heavy weight of the fabric was causing the dress to tear while being displayed.

Jackie opted for little jewelry with her wedding attire, but the jewels she did wear all held special significance. She complemented the gown with a single strand pearl necklace that was a family heirloom and a diamond pin from her parents. On her left wrist, she also wore a special diamond bracelet gifted to her by the groom, John F. Kennedy, the night before the wedding.

1. Lace veil belonged to her grandmother

Jackie followed the “something borrowed” tradition and donned a family heirloom on her big day. Jackie opted for a special cathedral-length veil which originally belonged to her grandmother, Lee. It featured a striking rose-point lace and was pinned into her hair with a lace-and-orange blossom tiara.