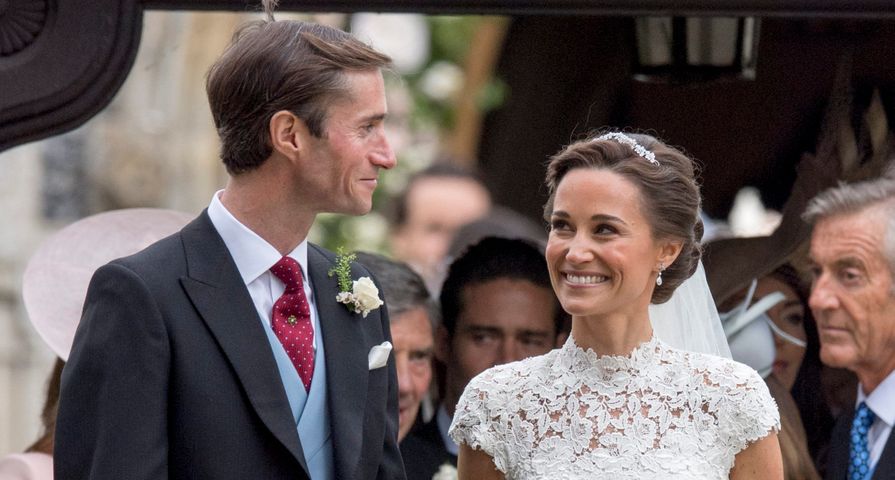 Pippa Middleton quickly became the world’s most acclaimed bridesmaid after she gracefully held the train of her sister Kate Middleton’s extravagant gown during her royal wedding to Prince William back in 2011. More recently, however, it was Pippa’s turn to walk down the aisle and her sister graciously returned the favor and took on the bridesmaid duty as Pippa married financier James Matthews in a private ceremony at St. Mark’s Church in Englefield. The bride clearly took a tip or two from her older sister while wedding dress shopping and donned a lace-embroidered cap sleeve gown that was quite reminiscent of Kate’s iconic 2011 Sarah Burton design. Although by now you’ve probably caught a glimpse or two of Pippa’s lace dress, there are still quite a few details you probably didn’t know about the garment. Follow along with 12 details you probably didn’t know about Pippa Middleton’s wedding dress:

12. She followed the “something old” tradition

Pippa Middleton proved to be quite the traditional bride and followed the “something old” tradition while prepping for the big day! Kate Middleton is known for repeating outfits and it seems that her sister Pippa has followed in her footsteps. The earrings she wore on for her wedding day were actually an old favorite that she wore on the day of her older sister’s wedding. The delicate diamond drop style earrings were a gift from her mother, Carole, on the occasion of her sister’s wedding and designed by the London jeweler Robinson Pelham.

Giles Deacon was the mastermind behind Pippa’s delicate and romantic wedding gown and came as a seemingly unexpected choice of designer. When Pippa announced her engagement it was widely believed that she would opt for a traditional bridal designer from a Belgravia-based couturier who specializes in English society weddings. Before 2016, Deacon focused his work on his ready-to-wear line and then announced he would be switching gears and focussing on couture instead. “It’s a privilege to show the craftsmanship that my team produces in London and a real testament to Pippa’s support of British fashion,” Deacon said in a statement.

10. There were many designers vying for the role of Pippa’s wedding designer

Aside from Giles Deacon, there were many other designers that reached out with an intense interest in designing Pippa’s gown! Pippa quickly became a fashion icon after wearing a sleek. white bridesmaid dress for her sister Kate Middleton’s wedding, so there was an avid public interest in what exactly Pippa would wear for her own wedding. Some of the contestants vying for the spot were bridal specialist Suzanne Neville, red carpet designer Jenny Packham and New Zealand designer Emilia Wickstead. Even Sarah Burton from McQueen, who designed Kate Middleton’s infamous wedding dress, expressed interest in designing for Pippa, but it was ultimately Giles Deacon who Pippa agreed upon.

9. The bodice was embroidered with pearls

Giles Deacon definitely pulled all the stops when designing Pippa’s dress and aside from the lace detailing on the bodice, he also incorporated delicate pearl detailing throughout. “The lace bodice is embroidered with pearl detailing over an organza and tulle underskirt, ” he explained of the dress. Her headpiece, earrings, and veil picked up on these pearl details and coordinated.

8. Pippa helped to design the dress

Typically, the design of a wedding dress is left in the hands of the designer and trusted to do what they will. Pippa Middleton, however, ensured that her voice heard and supposedly held a huge role in making her fairytale dress come to life. “She has a great eye, she knew what she wanted,” designer Deacon said of Pippa’s active role in the design process.

Instead of staying with the same designer who crafted her gown, Pippa opted for a cathedral-length tulle veil designed by milliner Stephen Jones. The whimsical veil was embroidered with pearls that matched the pearl embellishment on her dress. She also opted for a separate designer for her glittering Maidenhair fern tiara which was handmade by Robinson Pelham.

6. Heart-shaped detail on the back

One of the most unique and interesting details of Pippa’s Giles Deacon gown was the back of the dress which featured a cut out in the shape of a heart! The cutout detail was subtle but a romantic and feminine touch that was highly appropriate for a wedding day. “The dress is constructed with a cap sleeve, high neckline and features a corseted bodice with draping to the front and a heart-shaped detail at the back,” Giles explained of the custom dress design. The open-back concept was definitely a good call and looked stunning on Pippa by showing off her enviable toned back and figure!

5. Designed to make it look like there were no seams

Giles Deacon strategically designed the dress to create the illusion of no seams! “The bespoke silk cotton lace was hand appliquéd to create an illusion of the dress having ‘no seams,'” Giles explained of the dress.  “I wanted that ‘how-was-that-done?’ factor,” he said of his craftsmanship and the extravagant intricacy that was put into the design.

4. Changed into another dress for evening

Pippa and her husband James Matthews graciously welcomed photos as they attended their ceremony but enforced a no-photos policy for the following reception to ensure a classy affair. Despite no photographic proof, Pippa was confirmed to have changed into a different gown for her evening look and advised for guests to do the same. Her second gown of the evening was a white, flowing dress designed by Spanish bridal brand Pronovias and, according to reports, she took her hair out of the polished updo and let it fall loose in waves.

3. The dress was designed to sweep the floor flawlessly

The design of the dress featured a corset bodice that cinched in and showed off her tiny waist, then the dress flourished into a full and voluminous skirt. Deacon was quite intentional when designing the skirt and purposely layered the material to ensure it swept flawlessly across the ground. “The lace bodice is embroidered with pearl detailing over an organza and tulle underskirt, which has layer upon layer to enable a floor-sweeping movement,” he explained of the stunning garment.

2. Pippa had the dress taken in five times

Rumors swirled prior to the occasion that Pippa had her dress taken in a staggering five times over the course of the months leading up to the wedding! She is known for maintaining a highly active lifestyle, which is obvious with her toned body and is said to have implemented an even stricter health routine during the pre-wedding body prep. “I know she runs, swims, and does Pilates and gym work.” a source revealed of her workout routine which resulted in the dramatic weight loss.