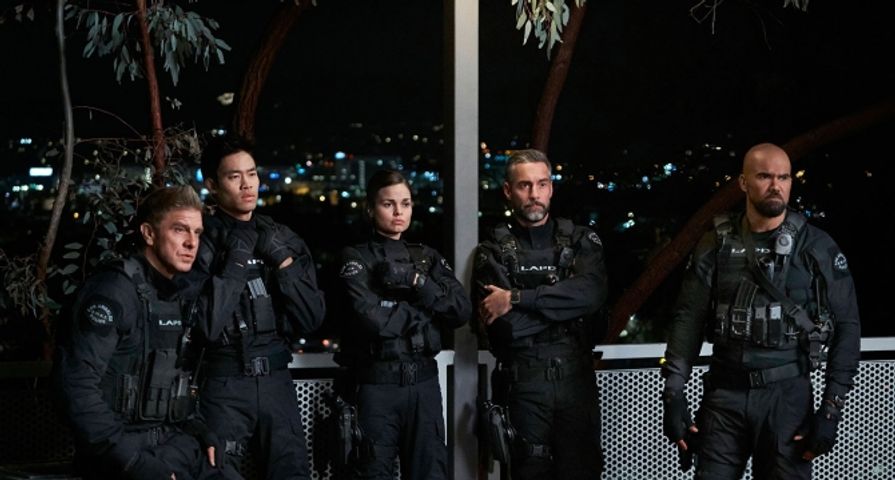 Following his exit from Criminal Minds, TV audiences have been waiting for Shemar Moore’s next big move, and now they have found it. In early 2017 it was revealed that Moore was set to lead CBS’ new cop drama S.W.A.T. and fans have been anxiously waiting in anticipation ever since. While most new series hit the circuit in early fall, S.W.A.T. is hitting CBS in mid-season and there are a lot of high hopes for the series. Here is everything you need to know about the new series:

News of the series was kept pretty quiet for quite some time, but when the announcement was made, it was made with Shemar Moore as the clear star in the role of Daniel “Hondo” Harrelson. In late February the news of the show was released and Moore himself couldn’t contain his excitement, taking to his social media to confirm he is set to star in the S.W.A.T. reboot with the caption, “Here’s MY Biiiiiiiiiigggggggg SECRET BabyGirls. Homies, N Fans!!!!” He has since kept fans up to date with the show’s production as he has shared numerous behind the scenes photos from filming and hanging out with the entire cast and crew. Of course, Moore was previously best known for his long-running role as Derek Morgan on Criminal Minds and prior to that starred on The Young and The Restless from 1994-2014.

For many fans, the characters set to appear in S.W.A.T. are familiar because the new series was inspired by the 2003 film of the same name starring Samuel L. Jackson, Colin Farrell and Michelle Rodriguez. Fewer people realize, however, that both the film and the new series is based on the ABC S.W.A.T. series that began airing in February 1975 and ended in April 1976. The original series starred Steve Forrest as Lt. “Hondo” Harrelson, Robert Urich as Jim Street, and Rod Perry as David “Deacon” Kay.

Although it is based off of the original series and film of the same name, the new S.W.A.T. will have its own story as well and connect with fans in a new way. “First and foremost, I need people to know it’s a thrill ride and it’s fun,” Moore said. “If you watch S.W.A.T. you’re going to have fun. But what’s going to surprise you is that there’s a lot of serious content that is relevant. It’s going to make you think. It’s going to make you go ‘Oh wow. I didn’t see that coming.’ And it’s going to relate to what you’ve either experienced, what you’ve heard of in real life.” He added that the pilot episode centers around a young black child being shot and killed by police and said that if fans are willing to listen to the show’s message it could “bridge the gap of understanding and distrust.”

With Shemar Moore taking the leading role of Hondo, who was portrayed by Samuel L. Jackson in the 2003 film, there are many other talented stars supporting the show. Jay Harrington, best known for his role in Better Off Ted, stars as Deacon, Kenny Johnson from The Shield portrays Dominique Luca, Stephanie Sigman from The Bridge is Jessica and Lina Esco from Kingdom is Chris.

The 2017 S.W.A.T. has a familiar name behind with Aaron Thomas serving not only as the show’s creator but also as a co-executive producer along with Shawn Ryan. Thomas began his career as a writer’s assistant on the series Soul Food and went to write and produce for many other popular series including Friday Night Lights, Numb3rs, and CSI: NY. Friday Night Lights executive producer Jason Katims spoke out about working with Thomas after giving him his big break on the popular series 10 years ago, saying, “I love his voice in the room. He was a very new writer then… but he had a quiet confidence about him and always came at the story from a place of being authentic and honest.” Meanwhile Shawn Ryan is credited with being the creator of The Shield and famed director and producer Justin Lin, who produced the 2003 S.W.A.T. film, is also acting as producer on the series.

Despite being a reboot, the series is a big step for CBS, and means a lot to creator Aaron Thomas who noticed something obviously absent from the shows he watched growing up, “There weren’t enough dramas that were taking people of color seriously,” he said. He added, “In the actual SWAT headquarters there are class photos,” says Thomas. “Rows of white faces until very recently when things became a little more diverse. There’s a meta message definitely to seeing a person of color promoted to a position of leadership on a show. Hopefully the show, in its own way, can be part of a conversation for a new generation.”

After missing out on the fall premieres, S.W.A.T. is getting a lot of attention as one of mid-season’s biggest additions. S.W.A.T. will hit CBS on November 2 at 10/9c and will hold the Thursday night slot. Many questioned why it wouldn’t be paired with Criminal Minds on Wednesday nights in hopes of capitalizing off of Moore’s established fans with TVLine’s Matt Webb Mitovich, stating, “Some have wondered why a Shemar Moore showcase isn’t paired with Criminal Minds on Wednesdays, and now I sort of scratch my head, too. I suspect that S.W.A.T.‘s established IP (as both a movie and the 1970s TV series) is being counted on to help it “pop” in a time slot that has troubled CBS as of late.”