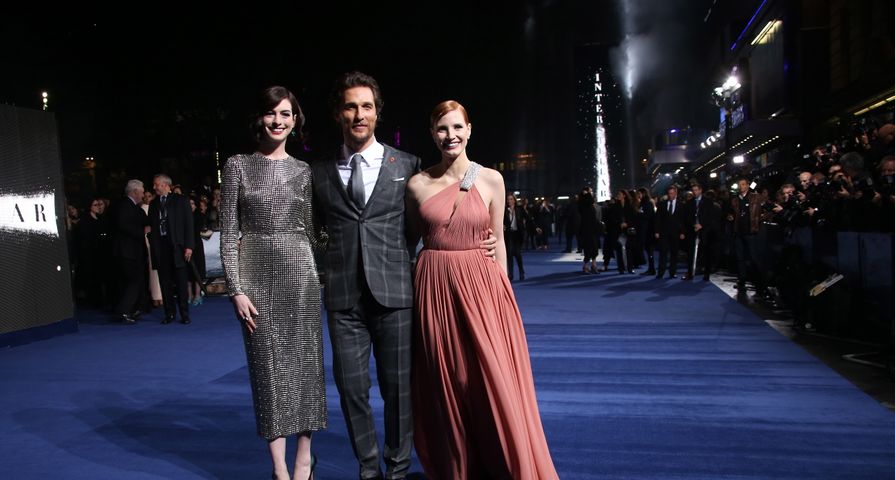 Respecting the work of Christopher Nolan (Batman Trilogy, Inception, The Prestige), as well as you, the moviegoer (and the hard earned funds you’ll lay down to see this epic in IMAX), you’ll find no true spoilers in the following. If you’re merely hoping for more justification as to why you need to see Interstellar, or trying to decide if you should save your money for Interstellar over OUIJA on Halloween… pocket your pennies. Shoot for 11/7.

One of the most difficult aspects of snuggling into a theatre seat with popcorn and soda to view the work of a contemporary, master filmmaker… you’re inevitably laden with expectation. There’s no way around it. At the very least, you’re expecting it to be awesome in scope and scale. You’re expecting to be stirred, maybe even changed. For Interstellar, I implore: Leave all expectation at the door.

Allow it to unfold.

Like so many of Christopher Nolan’s films, Interstellar welcomes your eyes to the screen, accompanied by rich sound design and a Hans Zimmer score you can quite literally feel in your gut. Admittedly, as a lover of cinematic art, I could feel my skin begin to stir beneath the surface–my goosebumps joined the party within the first 100 frames of the gorgeous, 70mm film print.

As the film roll offered the introduction to the sights and sounds of a familiar world created by Christopher and Jonathan Nolan (his brother and co-writer), it also served as catalyst to a quiet, yet incessant(-ly unwelcome) commentary of a fellow audience member to my seven o’clock. This served as perfect example, and a critical variable of the aforementioned: the world we live in is obsessed with personal expectation.

Ironically, within five minutes, the characters on the screen were wrestling with the same problem: Expectation. They possessed unmet expectation, hoped for expectation and the daily expectation of dealing with the planetary trials that were no longer ideal, nor sustainable. The fictional world presented in Interstellar is a representation of our very own, years from now–all historical reference remaining factual, while steeped in delicious fiction.

30 minutes in, I could tell that my seven o’clock counterpart was less than thrilled, and he likely wasn’t the only one. He wanted it all spelled out. He wanted more about the world constituting the present. He seemed frustrated by the documentary footage of people who had lived through some terrifying and tough times (actual documentary footage of American Dust Bowl survivors, for those interested). And lest I forget. He hated the robots. He thought they were terrible.

Interstellar merely offered my critical seven o’clocker a few clues of exposition, just as the tagline suggested: “Mankind was born on earth. It was never meant to die here.” It’s not a story about where we–a collective humanity–are, rather where we’re going.

Perhaps I’d have been frustrated, too, had I not been so engrossed by the spectacular cornfields on the IMAX screen, and the craftsmanship of the cinematography (Hoyte Van Hoytema) lending itself to human intimacy within the grandiose nature of epic establishing and sweeping aerial shots. I also felt enough back story existed through spoken word, and even more was suggested visually: History repeats itself; mankind did nothing to change it.

…and I loved the robots.

Still, it was understood–half an hour in–this was a divisive piece of art. You’ll find plenty of written criticism to back this claim. The story is twofold, and the audience is privy to both. There are aspects people will easily understand, likely leaning toward empathy, while other aspects will serve to frustrate, and be tossed aside as rubbish or absurdity.

Interstellar is a film that is deeply rooted in human emotion, hope and expectation, highlighting how idealistic and individual these life variables are when juxtaposed with pragmatism, despair and necessity. It deals with the life conundrum of surviving vs. thriving, and just scratches the surface of a theoretical essence to all physical existence as we know it. Things we have seen in films before, but not quite like this.

Together, the storytellers, including the star-studded cast, present theoretical quantum mechanics and astrophysics from some of the finest, refined scientific and mathematical minds the world has known (yes, including Albert Einstein), as these theories affect human lives in process. Nolan allows us to see moments of applied theory as they become accepted, relative fact, without presenting it in a self-serving, celebratory fashion. This may be the most incredibly understated feat of the film. It will shift the “real life” perspective of so many moviegoers.

Interstellar is also a work departing from the tonality of the typical science fiction space epic. At times, I felt as if I were pleasantly lost in the audience of an independent film with a 165 million dollar budget. There is comedy–more than you’d expect–lending itself to the wondrous spirit of humanity. The sentiment usually snuffed from works in this genre is allowed, and encouraged. (And this may have done in my seven o’clock counterpart) Only in regards to sentiment would I compare Interstellar to last year’s Oscar darling, Gravity. The two films are an apple and orange.

There are metaphors, messages and tributes from Christopher and Jonathan Nolan throughout–all threads within the literary and visual fabric of the film. These suggest and imply so much more than the average moviegoer may see or realize.

As to be expected, there are a few nods to Stanley Kubrick and 2001: A Space Odyssey, including the score, which drones, dips, dies, then swells to triumph. Even a setting of the great American pastime finds its way into the mix, though I should state: I don’t believe its inclusion to really be about baseball.

Ultimately, Interstellar is a film constructed with care by a true craftsman–a craft which has begun to dwindle in recent years with the force feeding of CG blockbusters, and digital technology which has been falsely advertised as possessing visual equality to film stock. Within the pioneering spirit of the astronauts and scientists within the world of Interstellar, Christopher Nolan is able to pioneer a new path in imagined space exploration, presenting an exquisite and new visual take on places fictional spaceships have taken us before.

All the while, the story addresses a question that we’re presently considering as 21st century humanity: What is really at the heart of our desired exploration?

Interstellar is an experiential motion picture journey, boasting impressive cinematic resonance. Do yourself a favor when you see it: Look over your left shoulder, check your seven o’clock, then buckle in for an enjoyable ride.