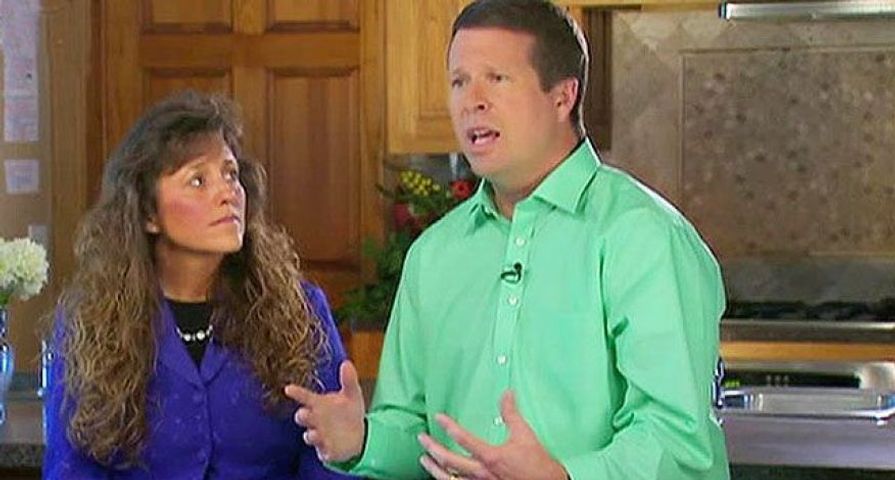 Since In Touch Weekly first reported on Josh Duggar’s molestation scandal, the family has been pretty down and out. Their reality TV show has been cancelled and there is no turning back – their careers in show biz are probably finished. While some people may feel some sympathy for the Duggar family, we think they kind of did it to themselves. Here are 7 ways they ruined their careers!

7. Pretending To Be Perfect

For years, the Duggar family pretended to be the perfect Christian family. They gave people tips on raising children, revealed their secrets for having a happy marriage and they paraded their charade on national television. We’ll give them some credit: Jim-Bob and Michelle might have a surprisingly strong marriage; however, when it comes to raising their children, they’ve messed up big time by not getting Josh proper help and by defending him as inappropriate behavior.

The Duggar family obviously never wanted the public to know that Josh had molested five girls – four of them his sisters. When Springdale, Arkansas police closed their investigation in 2006 because the statute of limitations had run out, the case was referred to the Families in Need of Services agency and Department of Human Services agency. Then, nine months later, Josh sued the Arkansas Department of Human Services, so the results of the investigation and the trial would be sealed. It looks like they were thinking ahead with this one – the less the public can access, the better for them!

Things You Might Not Know About Jon And Kate Gosselin's Kids

5. Judging Other People for Their Sins

When it comes to judging other people, the Duggars are pros. Earlier this year (before news of the scandal hit), Jessa went on Facebook to defend her right to judge. “I will speak to you a hard truth. I do not write this because I think that it will bring me popularity. It won’t. But it is Truth from the Word of God: the Bible. To not tell people this is to hide the truth from them. To keep silent is to not care for their eternal destiny! I care about you, and this is why I am speaking out!” she wrote. She also went on to condemn people who are content to lie, curse, indulge in lust, pornography, fornication and adultery. Funny that her brother indulged in many of those things but he’s still beyond reproach.

The Duggars have proven themselves to be total hypocrites. Back in 2014, Michelle Duggar recorded a robocall to Fayetteville, Arkansas residents arguing that an anti-discrimination law intended to protect transgender people would expose young girls to the threat of pedophilia. She said this knowing that her eldest son, Josh, had molested their underage daughters.

When Megyn Kelly from Fox News confronted Jim-Bob and Michelle about what she said in the recording and what she knew about Josh and they were surprisingly nonchalant about it. “A pedophile is an adult that preys on children. Joshua was actually 14 and just turned 15 when he did what he did. And I think that the legal definition is 16 and up for being an adult preying on a child. So he was a child preying on a child,” Jim-Bob said. So, Josh isn’t a pedophile, but he’s still a predator.

13 Things You Didn't Know About OutDaughtered

When Michelle and Jim-Bob found out that Josh had touched five underage girls inappropriately (for of them were his sisters), they tried to handle the situation themselves, with some help from elders at their church. Instead of sending Josh away to get professional help, they sent him to stay with a family friend who was in the home remodeling business. He didn’t receive any counseling while there.

Since news broke that Josh had belonged to Ashley Madison and had been cheating on his wife Anna, Josh is reportedly in rehab, a faith based one, called Reformers Unanimous. It will involve hard labor and hikes, but not a lot of counseling or talk therapy.

11 Things You Didn't Know About Jon And Kate Gosselin's Relationship

2. Made Light of What Josh Did

Megyn Kelly of Fox News interviewed all Jim-Bob, Michelle, Jessa and Jill after news of Josh’s predatory behavior broke and all of them made light of the situation. Jim-Bob and Michelle showed no sympathy for any of the victims and kept emphasizing that most of the time the girls had been asleep when it happened. At one point, Jim-Bob even made the argument “at least he didn’t rape one of them.”

Jill and Jessa’s interview wasn’t much better. Jessa excused Josh’s behavior by saying that he was “a little too curious of girls.” Instead of holding Josh accountable for molesting them, they instead blamed In Touch Weekly for exploiting them and hurting them more than Josh ever did.

1. Refused to Let TLC Do a Spin-Off Featuring His daughters

While the general public is pretty disgusted with Jim-Bob, Michelle and Josh, most people still like Jill and Jessa. After 19 Kids and Counting was cancelled, TLC reportedly wanted to do a spin-off about Jill and Jessa, but Jim-Bob allegedly nixed it, which means that their careers in reality TV are over for the foreseeable future.