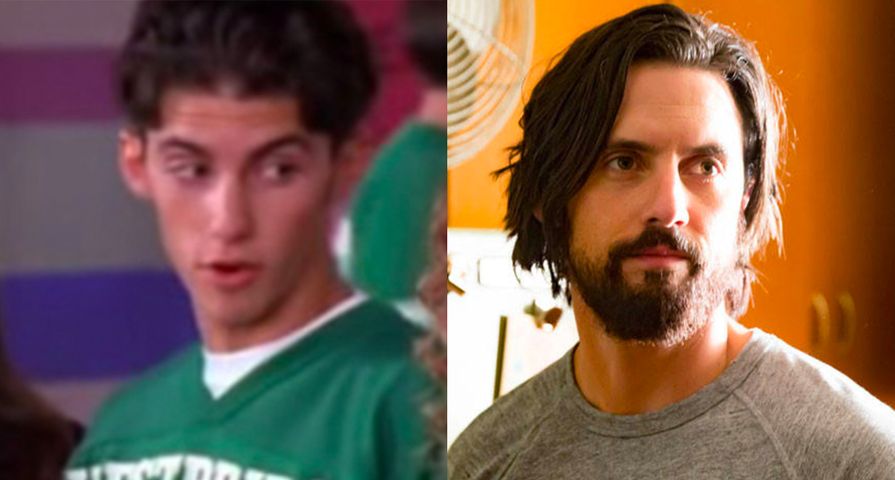 From 1996 to 2003, Sabrina the Teenage Witch was one of the best sitcoms on television and it appealed to way more than just teens. Over the years numerous stars of all generations and facets of the entertainment industry made their way to the set of Sabrina resulting in some truly memorable guest appearances and cameos. For some, their appearances came before major stardom and only looking back on the show now do fans realize where some of today’s biggest stars got their start. Snap your fingers and take a trip back to the ’90s and early 2000s with this look back at 14 celebrities you forgot made an appearance on Sabrina the Teenage Witch.

Just as Usher was beginning to rise to the top of the ranks in the music industry he made an absolutely amazing cameo on Sabrina the Teenage Witch. On February 15, 2002, the talented singer appeared in the Valentine’s Day inspired season six episode “I Think I Love You.” Usher portrayed The Love Doctor in the episode where it seems Sabrina is unable to say “I love you” back to her boyfriend. When she tells her Aunt she needs to see a doctor, her Aunt tells her “there is only one doctor that can solve your problem…the Love Doctor.” Upon telling him her problems, Usher sings his advice to her and even gets her to sing along.

Maria Menounos is best known for her work on Access Hollywood and Extra as a host and reporter, but she has had her fair share of acting gigs as well. Many know her from her recurring role as Jules on One Tree Hill, but her very first acting role came in 2002 when she made a very small appearance in the season seven episode “Free Sabrina.” In the episode, Sabrina is on a mission to expose a famous actress as a kleptomaniac and bursts into a press junket where she runs into Menounos who was playing the part of a reporter. From there Menounos went on to appear in Without a Trace, One Tree Hill, Entourage, Fantastic Four and more.

What would one of the biggest shows of the early 2000s be without featuring one of the biggest boy bands of the time? Among quite the impressive list of musical stars to appear on the show, NSYNC made an appearance in the season three episode “Sabrina and the Pirates” in February 1999. In the episode, Sabrina gets fake IDs in order to sneak into a club and see NSYNC perform. If that wasn’t good enough, the end of the episode features Sabrina, her aunts, and Salem getting a private performance from the five boy banders in Sabrina’s bedroom. Sabrina dances with Joey, Hilda dances with Chris, Zelda dances with JC, Lance serenades Salem and Justin Timberlake is left singing on the bed by himself.

Andrew Keegan was the guy of the ’90s and before his spectacular performance as Joey Donner in 1999’s 10 Things I Hate About You, he was making his rounds on hit teen series of the time. Keegan appeared on Baywatch, Full House, Step by Step, Boy Meets World, Party of Five, and of course, Sabrina the Teenage Witch. The actor made his one and only appearance in the season one episode “Magic Joel” in 1996 as none other than Magic Joel himself. In the episode, Sabrina is desperate for Harvey’s attention so she begins working as an assistant to a classmate who is trying to build a career as a magician, Magic Joel. Unfortunately, Joel becomes a little too fond of Sabrina and when she uses her real magic to make him invisible, he causes havoc in their school. The following year, Keegan would land his recurring and popular role in 7th Heaven and in 1999 had his biggest break in the teen classic 10 Things I Hate About You.

Donald Faison was everyone’s crush after he expertly took on the role of Murray in Clueless in 1996, so it isn’t surprising that Sabrina Spellman fell for him too. The hilarious actor made his first appearance on Sabrina the Teenage Witch in the season one episode “Magic Joel” as Justin, but two years later he was brought back and everyone was supposed to forget he was ever Justin. In season two’s “Rumor Mill” Faison was reintroduced as Dashiell, a half-mortal who became Sabrina’s love interest for three episodes before she decided she was in love with Harvey. Of course, Faison went on to even bigger things on TV with roles in Felicity, the Clueless series, and of course, his most popular role as Dr. Christopher Turk in Scrubs.

Everyone from up and coming stars, comedians, musicians to even Jerry Springer made an appearance on Sabrina during its seven-season run. The iconic tabloid talk show host had made appearances on other series including Married with Children, Roseanne, and The X-Files before he found himself making a cameo in the season three episode “Mrs. Kraft.” When Mr. Kraft’s grandmother renovates her house, he is forced to stay with the Spellmans which leads to Hilda and Sabrina summoning his ex-wife Lucy to take him away. Unbeknownst to them, Lucy is actually a witch and she had used magic to steal him away from Zelda. As the drama builds, Zelda, Lucy, Hilda and Sabrina all get summoned to the Jerry Springer Show to duke it out.

Brian Austin Green’s biggest role of his career has been as David Silver on the iconic teen series Beverly Hills, 90210 but in the middle of the show’s seasons, he found time to make an appearance on Sabrina the Teenage Witch. In the season one episode “Dream Date” Green appeared as Chad Corey Dylan, the “dream man” Zelda and Hilda create out of “man dough.” Green played off of his heartthrob status at the time thanks to his role on Beverly Hills, 90210 for the hilarious part. Following his time on Beverly Hills, 90210, Green became best known for his high profile marriage to Megan Fox and his most recent TV role was in Anger Management from 2012-2014.

Avril Lavigne was yet another musical star to make a guest appearance on the show when the “Sk8er Boi” singer appeared in the season seven episode “Bada-Ping!” Lavigne portrayed herself as she performed at the club Sabrina was at and other than that didn’t have a part in the episode, although the singer and Sabrina did pose for an awkward photo at the end.

NSYNC wasn’t the only iconic boy band to make its way on to the set of Sabrina. The Backstreet Boys appeared in the season two episode “The Band” where Harvey decides to sign himself, Valerie and Sabrina up for a battle of the bands at the school despite never having played music in his life. Sabrina brews a potion of bottled talent that makes the trio incredible but causes tension in their friendship causing her to reverse the potion. The end of the episode features the Backstreet Boys as they discover one of Sabrina’s bottled potions during a game of basketball and after drinking it, they break into a rendition of their hit song “As Long As You Love Me.” In season seven, Backstreet Boy Howie Dorough made an individual appearance on the show when he starred in the episode “The Big Head” as an arrogant musician who Sabrina has to write a profile on for her first assignment at Scorch.

Is there anything Bryan Cranston can’t do? The beloved actor who has done everything from playing the ultimate family man on Malcolm in the Middle to a meth-making cancer patient in Breaking Bad was also on Sabrina the Teenage Witch! Cranston appeared in the season one episode “Troll Bride.” In the episode, the actor played a hilarious witch lawyer who Sabrina calls in order to help her get out of a marriage contract with the troll, Roland. Now, Cranston is one of the most popular actors in the entertainment business and has accumulated a whopping 154 acting credits to his name.

No sitcom cameo is better than when it is from one of TV’s biggest legends. Even Dick Van Dyke was charmed by the teenage witch series and appeared in the season four episode “Welcome Back, Duke” as Duke, an old colleague of Salem’s who is fresh off his stint in witchdom exile, meaning his magic is a bit rusty. Naturally, Dick Van Dyke was as good as ever and even tap danced with Melissa Joan Hart in the hilarious and heartwarming episode.

Before he was one of TV’s highest paid actors as Howard Wolowitz on The Big Bang Theory, Simon Helberg was just trying to make it in the industry and in only his seventh role ever he appeared on Sabrina the Teenage Witch as The Spokesman. In the episode from season six, Sabrina uses magic and modern technology to go back in time to try to mend her Aunt Zelda’s broken heart but ends up changing her entire family’s history in the process. As a result, she ends up contacting Helberg’s character, a consultant for time travel, in order to try to figure out how she could fix what she had done. Following the 2002 episode, Helberg would go on to appear in many other small roles before finally hitting it big with his role in Studio 60 on the Sunset Strip in 2006 and finally The Big Bang Theory in 2007.

Is there anything Milo Ventimiglia hasn’t been in? While the charming actor is best known for his roles in Gilmore Girls, Heroes and now This Is Us, his early career saw a ton of appearances in TV’s biggest shows. In only his third role ever, Ventimiglia appeared in Sabrina the Teenage Witch‘s fourth episode “Terrible Things.” In the episode, the actor appeared as Lettermen, a jock and classmate of Sabrina’s who Libby and Jenny both try to convince to vote for them for school President, but Libby wins him over when she promises free pizza.

Last, but not least is perhaps the most iconic celebrity cameo ever on Sabrina the Teenage Witch — Britney Spears. In real life, the two young blonde stars were best friends so they used the season four episode “No Place Like Home” to reunite and promote Hart’s film Drive Me Crazy which had Spears’ single by the same name as the lead track. In the episode, Sabrina leaves her home to live with her dad in Paris but after missing Britney’s concert and becoming lonely, her dad casts a spell to bring Spears to Sabrina for a special performance and the two bond over their loneliness.