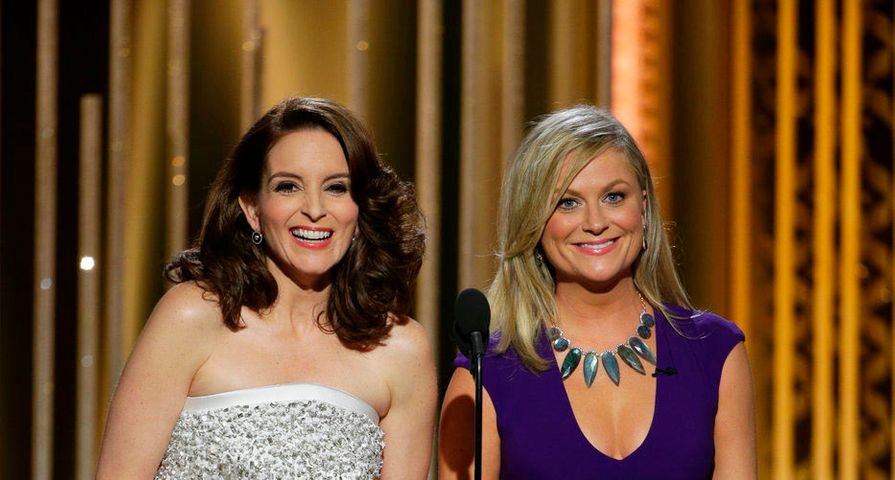 The dynamic duo of The Golden Globes came together to host for the third and final time on Sunday January 11, 2015, for the 72nd Golden Globe Awards and as always Tina Fey and Amy Poehler did not disappoint as they entertained from beginning to end.

Hollywood’s two funniest ladies looked stunning as they came out for their opening monologue and their sharp wit matched their sharp style as they did not hesitate to lovingly ridicule the best actors and actresses in the industry beginning the night with, “Good evening and welcome you bunch of despicable, spoiled, minimally talented brats.”

Somehow the pair managed to tackle everything from George Clooney to North Korea and even made good on their promises to make jokes about Bill Cosby, which they did all within ten minutes and kept the crowd laughing the entire time.

One of Fey’s and Poehler’s best moments was a slight jab not only at George Clooney but the entertainment industry itself when they discussed his new wife and her achievements. “George Clooney married Amal Alamuddin this year,” Tina began. “Amal is a human rights lawyer who worked on the Enron case; was an adviser to Kofi Annan regarding Syria; and was selected for a three person UN commission investigating rules of war violations in the Gaza Strip. So tonight her husband is getting a lifetime achievement award,” receiving cheers and laughs especially from Alamuddin and Clooney.

The two women also took the opportunity of being in a room filled with ridiculously good looking celebrities to play a hilarious game of “Would You Rather.”

They began with Colin Farrell and Colin Firth with Poehler saying, “Farrell, all day.” Tina disagreed stating, “Firth, for a polite amount of time.” They went through a few sets of Hollywood hunks before Poehler said Chris Pine, but before an option was given, Fey loudly stated “Chris Pine” directly into the mic, and that round was decidedly over.

With the Sony hacks and North Korea threats over The Interview garnering so much attention, there of course had to be jokes made, and while the subject was touched upon throughout the night, the pair jumped on the topic almost immediately.

“Tonight we celebrate all the great television shows that we know and love, as well as all the movies that North Korea was okay with […] North Korea referred to The Interview as absolutely intolerable and a wanton act of terror. Even more amazing, not the worst review the movie got.”

Like with their “Would You Rather” game, having two female powerhouses hosting the event allowed for the ladies to call out the double standards of Hollywood, which of course they did not shy away from. “Steve Carrell’s Foxcatcher look took two hours to put on, including his hairstyling and makeup. In comparison it too me three hours to get read for my role as human woman,” Tina Fey joked as Carrell remained jokingly stonefaced.

Last but not least of Poehler and Fey’s best moments is of course making a joke surrounding the allegations against Bill Cosby.

While discussing the film, Into the Woods, Poehler states,” In Into the Woods Cinderall runs from her prince, Rapunzel is thrown from a tower for her prince and Sleeping Beauty just thought she was getting coffee with Bill Cosby.” A joke that received both cheers and shock from the crowd, but the two carried on even going into Bill Cosby impressions.

For three years Amy Poehler and Tina Fey have dominated the Golden Globes and whoever takes the challenge next sure has a hard act to follow.

Check out their full monologue below!