This Is Us Season 3 Premiere Recap: “Nine Bucks” 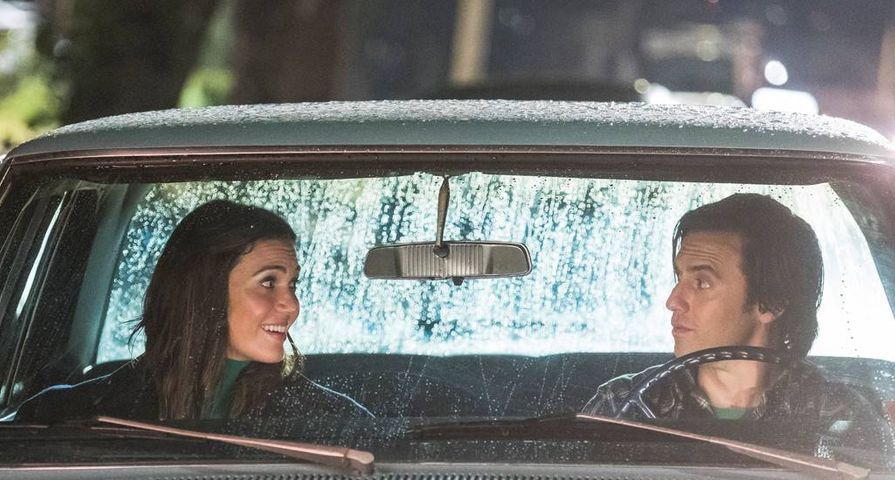 After a long wait, This Is Us finally returned on Tuesday, September 25 with its season three premiere, and there is a lot to unpack, including an epic final few minutes!

The episode titled “Nine Bucks” began with a mystery character we had never met before phoning his mother and telling her how nervous he is before jumping on a bus and heading to an unknown destination. That man’s moments are inter-cut with scenes of the Pearsons in the present, showing the moments after Kate and Toby’s wedding in which they want to start trying for another baby before a scene at the doctors shows Kate has PCOS (Polycystic Ovary Syndrome) and getting pregnant again might not be so easy.

In the meantime the episode also took us back in time to its central focus: Jack and Rebecca’s first date which happens after he sees her singing in the bar. “Nine Bucks” refers to the amount of money Jack had to spend on Rebecca when he takes her to the carnival, and we already get a glimpse of what is to come as Rebecca asks him about his time in Vietnam which causes Jack to go silent.

As for Randall and Beth, a flashback shows Deja’s mother giving up parental rights in a courtroom while mentioning Deja’s father which is sure to become a plot point later. Meanwhile Beth figures out that Kevin and Zoe are dating and does not like it, and Randall takes Deja back to where he first met William to tell her that he and Beth want to adopt her.

Back to Kate and Toby,  the doctor tells Kate, bluntly, that her weight would render the necessary IVF treatments unsafe, and that there are liability issues and refuses to be a part of it because of the liability issues. The moment is harsh and a tough blow for Kate who later at her birthday party (with a cake literally made out of carrots) tells everyone she wished for a baby but it won’t happen. As the pair begin to lose hope about starting a family, the doctor asks to see them again, and this time tells them she is sorry for how she reacted and says she does want to help them with IVF.

Meanwhile, as it turns out Deja knows where her birth father is and goes to his place of work to get Randall his birthday gift. “I’m going to do something really great with my life and you’re going to miss it,” Deja tells him. “I met these people and they think I’m exceptional.” She then adds he’ll never need to hear from her again, but that she needs one favor: help on getting Randall a birthday gift. She returns for the party, presenting her foster dad with a new pair of sneakers. Then she adds, nonchalantly, that he can sign “the papers.” She’s made her choice. This is her family.

Then, there is Jack and Rebecca’s first date which does not go well really at all, but as Rebecca says despite that the way Jack looks at her makes her feel that bad date or not, he is the one, and they kiss. Despite a bad first date, Jack is later seen driving to Rebecca’s house with flowers and she is seen getting ready only to open the door to some other man with a bigger bouquet of flowers.

Eventually it is discovered that the mystery man from the beginning of the episode is Franco Harris and the night of Jack and Rebecca’s first date is the night of Harris’ immaculate reception as a Pittsburgh Steeler. The great Franco Harris rears his head as the episode builds toward its climax, and This Is Us clarifies his symbolic role here. Sportscasters in the background of the past-timeline rave about how he led a comeback for the ages, where “it looked like it was all lost” — “the miracle of all miracles.”

In the end, the whole episode built up to two major moments with one showing audiences Toby flushing his antidepressants down the toilet because they had contributed to his sperm slowing down and he wants to do everything he can to make sure Kate gets pregnant.

The biggest moment however was that major flash forward from the season two finale where once again old Randall and an older Tess are going to see the mystery “her” and Randall calls old Toby who is alone in bed. Randall asks Toby if he is “coming down” and Toby says he doesn’t think she wants him there to which Randall replies, “She wants you there, too.”

While this new flash forward seems to point towards Kate as the woman they have to all go see, it only left audiences with more questions!