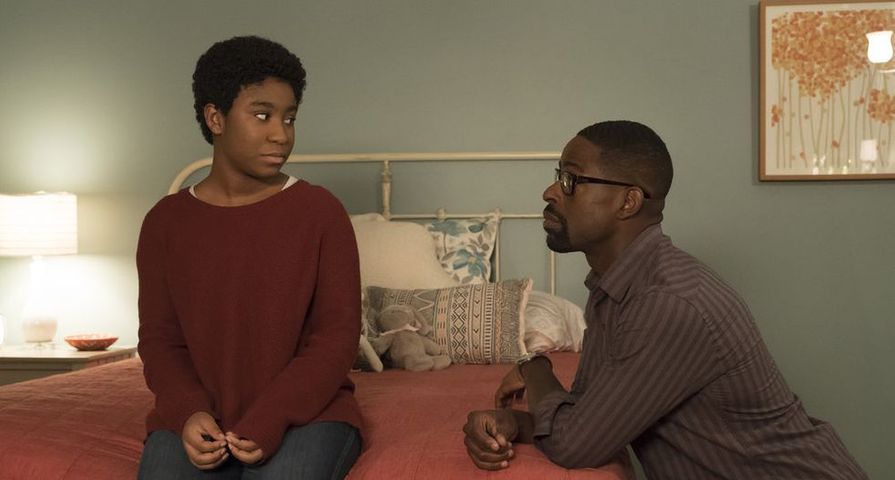 It may be hard to believe but after the Tuesday, March 6 episode of This Is Us, there is now only one episode left of season two! The penultimate episode, “This Big, Amazing, Beautiful Life,” refocused on Deja as fans got more of her backstory as she returned to Beth and Randall’s and understood more about her and how similar she really is to Randall and the Pearsons. Follow along for a full recap of “This Big, Amazing, Beautiful Life.”

As fans remember, the end of episode 16 saw Beth and Randall return to Deja and her mother Shauna’s apartment so that Randall could just check up on her, only for the pair to find that Deja and Shauna were homeless and living in their car, and while Deja winds up with Beth and Randall in the end, her story needs to be told first.

When Deja first arrived in Beth and Randall’s home, Randall told her they are more alike than she realized, then through Deja’s story, the audience sees how people do share similar experiences of joy, and pain, and as a 16-year-old Shauna is seen giving birth to Deja, there are clips of Rebecca giving birth, and William being there for Randall’s birth, and Randall and Beth welcoming Tess, all very different experiences, but at their core also very similar.

After a young Shauna gives birth to Deja it is clear she has no idea how to be a mother, and even after her own mother gives her a stern-talking to, Shauna cannot seem to put Deja first. While things were okay while Deja’s grandmother was alive, things change in their lives after she passes, and Shauna still doesn’t know how to take care of her little family.

Despite being only a kid, Deja quickly had to learn to take care of her mom and not the other way around, and while things were certainly difficult, the two seemed happy in scenes that impacted your emotions in a way only This Is Us could. Then, on Shauna’s birthday, a teenage Deja decided to make a special dinner for her mom but ended up cutting herself pretty badly, so she takes herself to the hospital. Unfortunately an injured child arriving at the hospital alone immediately alerts staff who bring in social worker Linda, which triggers the biggest changes in Deja’s life.

Because of how bad the circumstances look, Deja is taken away from her mother, at least temporarily. But sadly, as we come to find later, the pain of losing Deja drives Shauna to drugs, and Shauna ends up in and out of rehab for a year, extending Deja’s time in the system.

For the first time, This Is Us audiences saw Deja’s time in the foster care system where she was placed with the Millers, and Mr. Miller becomes abusive towards Deja and her foster sister Raven, which begins the transformation into the quiet, reserved and fearful Deja audiences were introduced to. Luckily, after Deja reveals to Linda what is happening in the home, both she and Raven are removed.

After going through numerous foster homes, Deja is finally brought back to her mother, who is out of rehab but also brought with her a new boyfriend. It doesn’t take long for the boyfriend to revert back to his old ways and it is his gun that the cops find in Shauna’s car which leads to Shauna’s arrest and Deja being placed with Beth and Randall. With her backstory intact, familiar scenes from Deja’s stay with the Pearsons played out, but this time we knew what her perspective was and why she acted the way she did.

After her mother came back for her again, things seemed to be okay between Deja and Shauna, but Shauna slipped up again when she used the money she had to pay her boyfriend’s bail instead of the bills. Since Deja can’t bring herself to selling off her grandmother’s brooch, she resigns herself to living in the car with her mom, that is until she wakes up to see Beth and Randall standing there.

After the pair bring Shauna and Deja back to their place for a good meal, and a good sleep in real beds, Shauna tells Beth she realized she had never seen Deja act like a kid before, the way she does when she is being taken care of by Beth and Randall. As a result, Randall gets up in the morning to find Shauna with her bags packed as she says, “I gotta go, and I can’t take her with me.”