The ‘BH90210’ Premiere Honors Luke Perry: “We’re Not Going To All Be Here Forever” 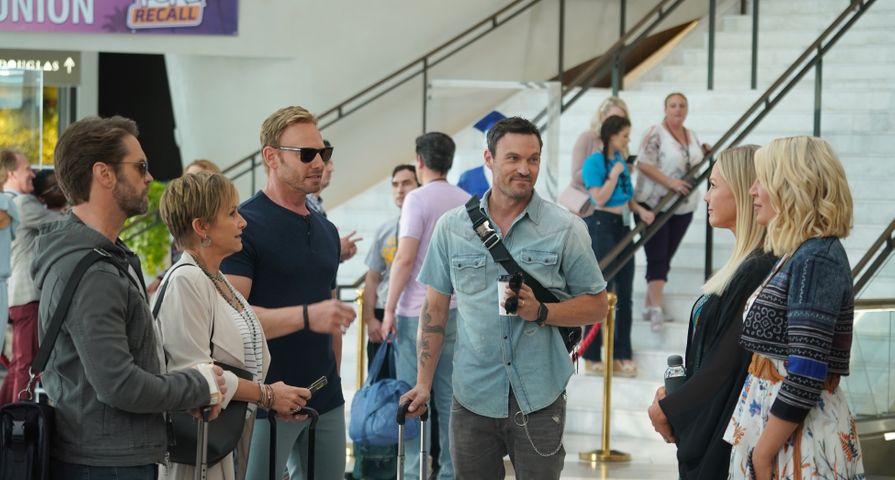 After nearly 20 years, much of the cast of Beverly Hills, 90210 were back on TV screens with the premiere of the new series BH90210 on Wednesday, August 7.

As expected, the premiere was a little confusing, and very dramatic as original stars Gabrielle Carteris, Shannen Doherty, Jennie Garth, Brian Austin Green, Jason Priestley, Tori Spelling and Ian Ziering came together to play “heightened version of themselves” for the new series.

The premiere saw the stars come back together to celebrate the Beverly Hills, 90210 30th reunion at a convention in Las Vegas and crossed the line between reality and fiction many times with the storylines for all of the stars. Garth plays a two-time divorcee that is on the brink of a third divorce, Spelling plays a mom of six that is constantly battling financial issues, Carteris  plays a new grandma, Priestley plays a married film director, and Ziering plays a married man with a “perfect marriage” who discovers that his wife was cheating on him.

After a drama filled weekend together at the reunion, Garth’s character exclaims “This the time to do a reboot!”

Of course, not all the stars could be a part of BH90210 after the shocking and tragic passing of beloved star Luke Perry in March at the age of 52. While Perry could not be in the series, the premiere made sure to honor the late star who played Dylan McKay during the show’s original run.

When the cast reunited about halfway through the episode Gabrielle Carteris made a comment about how excited she was that “we are all here.” In a somber moment, Jason Priestley then responded, “I wish that were true.”

Later, as Spelling talked about them being a family, she added,  “We’re not all gonna be here forever. But we made something that will be,” and raised a champagne glass for a toast: “To Luke.”

Then, the episode ended with Garth suggesting the reboot as she watched an old episode of Beverly Hills, 90210 and the episode concluded with a flashback clip of Perry saying, “Welcome to paradise, man. Welcome to your dream come true.”  The new show then zoomed in on the frame, with “For our friend Luke Perry. 1966 – 2019) below the still.