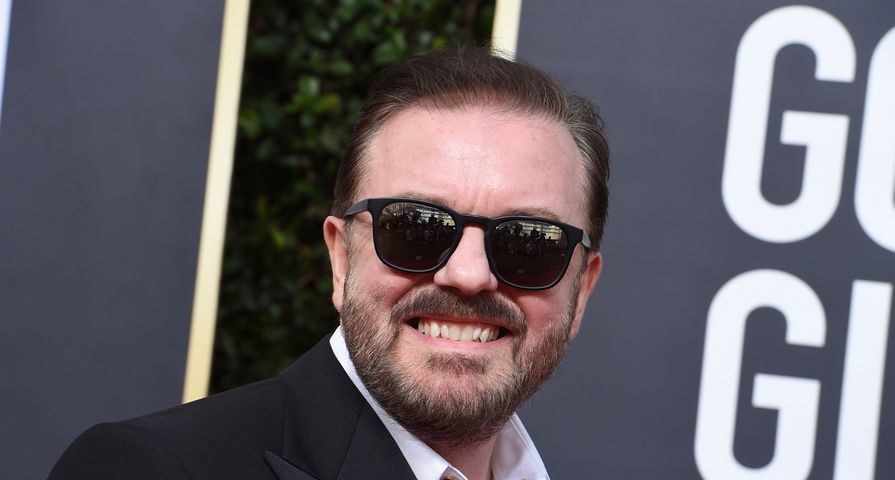 Ricky Gervais began the 2020 Golden Globes by doing the same thing he does every time and hoping that the audience is used to his antics by now. The comedian has hosted four Golden Globes ceremonies before, and as expected, he didn’t hold back in his fifth time hosting the show. Gervais did warn the audience at the beginning.

“You’ll be pleased to know this is the last time I’m hosting these awards, so I don’t care anymore. I’m joking, I never did,” he said, moving on to a joke that the Hollywood Foreign Press Association doesn’t speak English and probably hasn’t read his tweets.

His first joke about Felicity Huffman received a lot of groans.

“I came here tonight in a limo, and the license plate was made by Felicity Huffman,” he said, and the audience reacted pretty loud.

He continued: “No, shush. It’s her daughter I feel sorry for, OK? That must be the most embarrassing thing that’s ever happened to her, and her dad was in Wild Hogs.”

The comedian then touched on how many people of color were snubbed in all the major Golden Globes categories because “the Hollywood Foreign Press are all very, very racist,” then he joked that Martin Scorsese compares movies he dislikes to theme parks because he’s not tall enough to ride them.

Gervais then moved on to Leonardo DiCaprio’s dating history.

“Once Upon a Time in Hollywood, nearly three hours long. Leonardo DiCaprio attended the premiere and by the end, his date was too old for him,” the comedian said.

The movie Cats also received some attention from Gervais, including a joke about Judi Dench that he almost didn’t say that involved licking “something.”

The comedian then ended his monologue by shaming the entire room for working for companies that he claims were the opposite of woke.

“If you do win an award tonight, don’t use it as a platform to make a political speech, right? You’re in no position to lecture the public about anything. You know nothing about the real world. Most of you spent less time in school than Greta Thunberg.”