The duo quietly married in Windsor on Friday morning with a limited guest list. Queen Elizabeth and Prince Philip were among the small number of guests, which allegedly totaled around 20 people. The guest list included just close friends and family and the ceremony took place at All Saint’s Chapel, in Windsor Great Park, just a short drive from the castle.

A statement from Buckingham Palace said, “The private wedding ceremony of Princess Beatrice and Mr Edoardo Mapelli Mozzi took place at 11 a.m. on Friday 17th July at The Royal Chapel of All Saints at Royal Lodge, Windsor.”

“The small ceremony was attended by The Queen, The Duke of Edinburgh and close family. The wedding took place in accordance with all relevant Government Guidelines,” the statement read.

Reportedly, the Queen had to leave the event early for Capt. Tom Moore’s knighthood ceremony which took place back at the Castle.

Princess Beatrice and Edo Mapelli Mozzi had planned to wed on May 29 but were forced to reschedule due to ongoing global health concerns. The couple had originally planned to wed at St. James’s Palace in London with a reception to follow at the Queen’s gardens at Buckingham Palace.

When the wedding was postponed in mid-April, a spokesman shared, “There are no plans to switch venues or hold a bigger wedding. They aren’t even thinking about their wedding at this time. There will come a time to rearrange, but that’s not yet.”

Congratulations to the newlyweds! 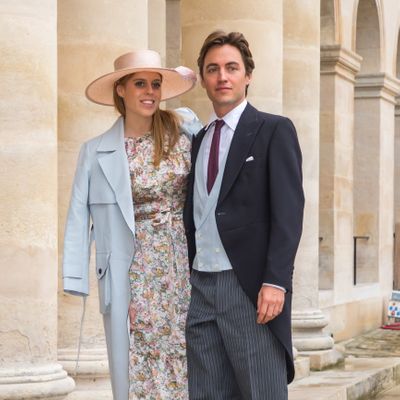