Kate Middleton and Prince William shared some adorable new portraits of Prince Louis in honor of his second birthday on April 23rd!

They released five adorable new photos of the little Prince who has grown significantly over the past year. The photos were taken by Louis’ mother, the Duchess of Cambridge, who’s made a tradition of releasing new photos of the children on their birthdays.

The photos show Louis working on some artwork with his hands covered in bright paint. The rainbow colors on his hands are meant to symbolize support for the U.K.’s National Health Service workers among the ongoing global health concerns.

“Sharing a sneak peek of Prince Louis’ handiwork ahead of his second birthday!” they captioned the first photo set of him.

In the second photo set, the Cambridges made a lighthearted joke with the caption “Instagram vs. Reality” which shows Louis posing nicely in the first photo with paint on his hands and then a second photo of the paint all over his face. 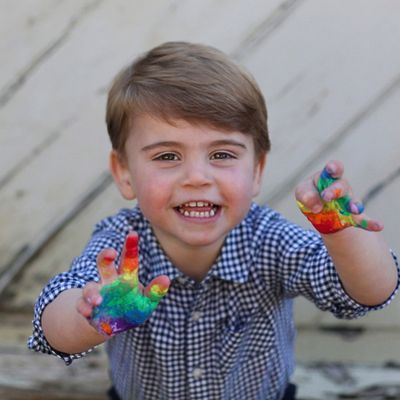