Prince Harry and Meghan Markle have reached out to a family in Liverpool who recently lost their daughter, Holly Smallman.

The 18-year old teen suffered from multiple complex conditions since birth, including cerebral palsy, epilepsy, and chronic lung disease. Her parents, Hayley and Gary Smallman, were only able to invite up to 10 people to the funeral service due to ongoing global health and safety concerns.

Prince Harry spent some time with Holly and her family during the annual WellChild Awards in October 2015. Her sister Ruby Smallman, who was just 7-years old at the time, won the Most Caring Young Person Award, which is when the family was introduced to the Duke of Sussex.

Upon hearing of the news of Holly’s passing, Prince Harry crafted a touching email to send his condolences to the family. He began, “I feel so fortunate to have met Holly in 2015 when her sister Ruby received a WellChild Award. Holly was evidently a very special and happy girl, despite her significant challenges, and she clearly had an extra special relationship with her siblings.”

“It was a great privilege to spend time with you all, particularly Holly,” he continued.

“Hayley, I know since then you have been an avid WellChild supporter and ambassador; it’s been a pleasure to see you again on a few occasions,” Harry said in the letter. “I’ve heard just how much you’ve done for other parents caring for children with complex needs, helping to push forward programmes and campaigns that provide support to these families.”

He continued, “Given everything you have both dealt with personally, this is truly selfless and inspirational. I am so grateful to you, as I know many other people and families will be too. Huge respect for juggling so many plates and always being able to put a smile on people’s faces.”

“I imagine words cannot really hope to provide much comfort to you and your family at this most difficult of times, but I wanted you to know that you, and your daughter Ruby and son Josh, are all in my thoughts and prayers,” the email continued.

He concluded by adding, “Meghan and I send our deepest and most heartfelt condolences,” before signing off with “Harry.” 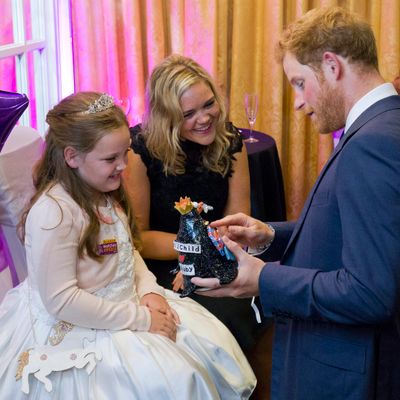