The series has a special place in Harry’s heart and was one he loved as a child. He was even spotted wearing a Thomas-branded bag when he attended kindergarten for the first time in September 1987, which is pictured below.

In a statement he said, “Thomas the Tank Engine has been a comforting, familiar face to so many families over the last 75 years – entertaining, educating and inspiring children on important issues through exciting stories and characters.”

“I certainly have fond memories of growing up with Thomas & Friends and being transported to new places through his adventures. I am very proud to have been asked to take part in this special episode. I wish Thomas & Friends a very happy anniversary,” he shared.

In the clip, the new father sits in a chair at Buckingham Palace to introduce the new episode called Thomas & Friends: The Royal Engine. It features his grandmother, Queen Elizabeth, and his father, Prince Charles, as a young boy.

The 75th anniversary special of Thomas & Friends will air on Netflix on May 1.

Check out some behind-the-scenes of recording and throwbacks of Harry as a child below: 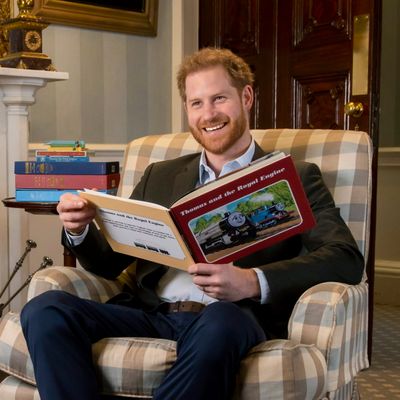