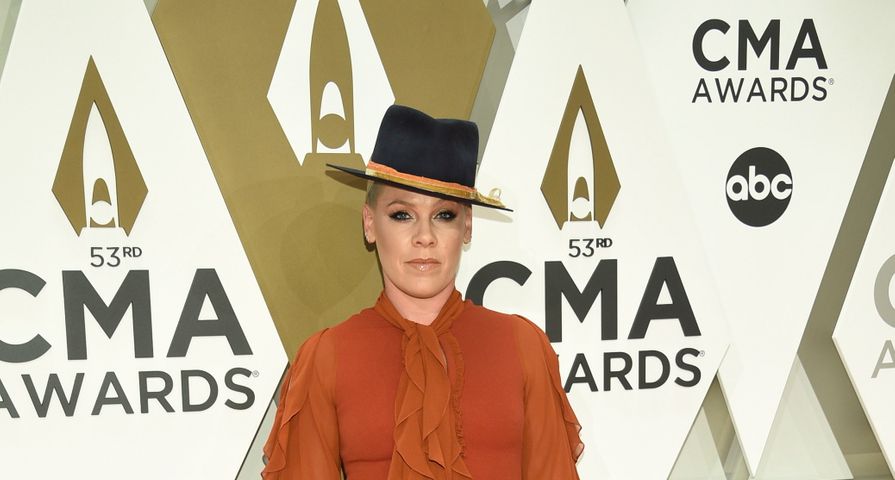 Pink made her first appearance ever at the 2019 Country Music Association Awards with her husband, Carey Hart, and their two children on Wednesday, November 13, and the 40-year-old singer announced that she is taking a break from music to spend more time with her family.

“We did two-and-a-half years [recording and on tour] and Willow is back in school now and Jameson’s gonna start preschool soon, so it’s kind of the year of the family,” Pink shared with Entertainment Tonight while on the red carpet.

Pink revealed that the reason the singer is taking a temporary break from her career is so that her husband, Hart, can focus more on his career.

“Carey has a lot going on as well,” Pink said about the off-road truck racer and former motocross competitor. “He is super supportive. He follows me around the world, and now it’s his turn.”

Entertainment Tonight then asked the singer why she brought her 8-year-old daughter, Willow, and 2-year-old son, Jameson, to the awards ceremony, Pink answered, “They just make it fun for me. They have so much fun and there’s so much to see.”

At the 2019 CMA Awards show, Pink took to stage with Chris Stapleton to perform their duet “Love Me Anyway.”

“He’s my person. He’s my favorite voice today in music, and I just love him,” Pink told Entertainment Tonight when asked about Stapleton. “Truly, he is the most amazing songwriter. He’s the most amazing human. I love his family. They’re so kind and humble. He loves music and he loves collaborating, and here I am.”

The singer also talked about how the Stapleton’s country album, Traveller, “gets spun a lot in our house” on their vinyl player.

Pink and Hart’s daughter, Willow, has recently become a regular at award shows. In 2017, when Pink accepted the Video Vanguard Award at the MTV Video Music Awards, the singer delivered a sentimental speech about her daughter. The next time we saw Willow, she appeared on the People’s Choice Awards red carpet with her younger brother on November 10.