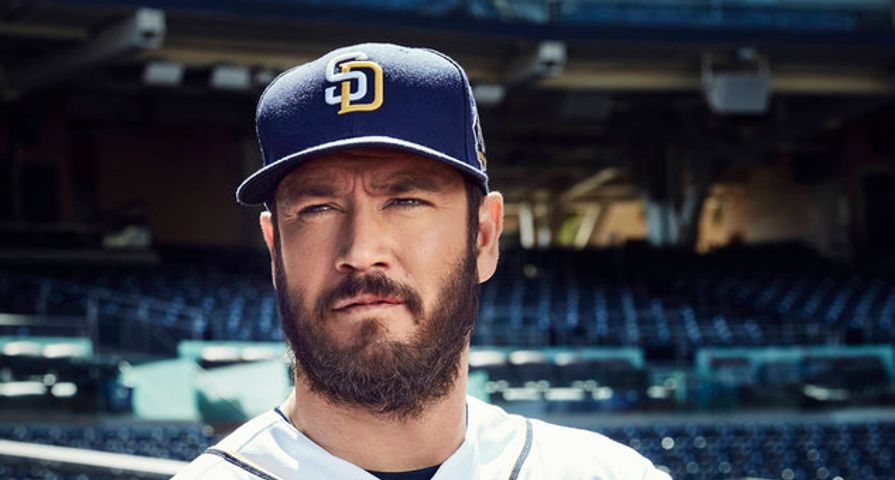 It may be 22 years since Mark-Paul Gosselaar last played Zack Morris on Saved by the Bell, but he is still trying to shed that image.

For his newest role, the 42-year-old actor has undergone a somewhat dramatic appearance change by packing on the pounds and growing some serious facial hair. Gosselaar is portraying Mike Lawson, a catcher for the San Diego Padres, for the new series Pitch in which for the first time ever a female plays for an MLB team.

When asked about just how much weight he has gained while at the 2016 TCA Summer Press Tour, he joked, “I’ll keep that a secret because insurance, because I may not qualify for life insurance. They always ask you, ‘oh, have you gained or lost five pounds in a year and I’m like, ‘Five pounds? I lose that in a week! I gain it in a week.’ It was substantial.”

He added that landing this role was different for him, “It’s not too often that you walk into a casting room and the creator of the show says, ‘I’d like to have you to play a character.’ A lot of times in television they’ll have you come in and there’s a character on the page, but they’re really buying yourself.” Gosselaar explained that Zack Morris has followed him his entire career, but Pitch creator Dan Fogelman understood that. “I’ve been in the industry for a while and I do have something that follows me. Dan was really the first to say, ‘I want to break that. I don’t want people to recognize you right away’– that’s the beard,” Gosselaar said of growing a ton of facial hair which definitely distinguishes him from Zack Morris.

He added that his wife is not a fan, however. “My wife hates it. She says I didn’t buy you with a beard. ‘I want the model without the beard,'” he said. “We have four children and I think it’ll remain at four children, let me put it that way. It’s a home-grown contraceptive.” Fogelman also insisted that the actor add some weight to make the role believable. “He said you need to gain weight to be believable as a catcher. These guys run 200 and above and so that’s where we are.”

Pitch is set to premiere on Thursday, September 22 at 9 p.m. on Fox.