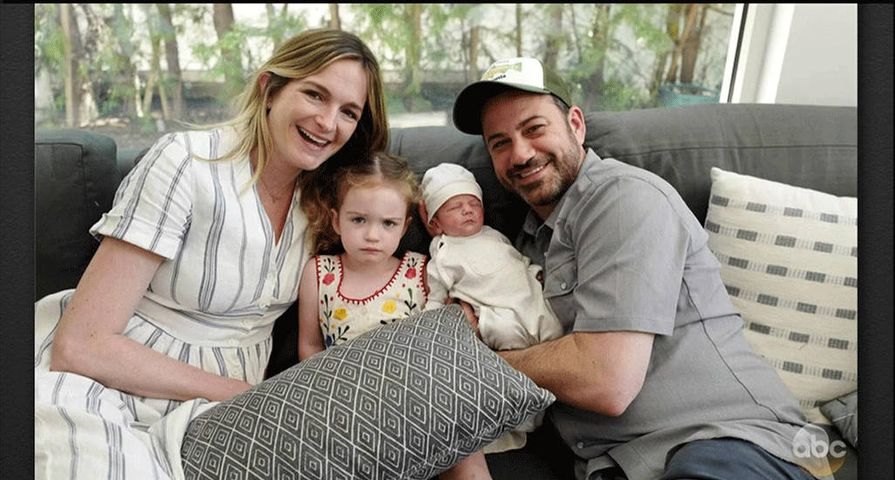 Jimmy Kimmel had some very emotional news to share with his audience during the opening monologue of the Monday, May 1 episode of Jimmy Kimmel Live!

The beloved host revealed that he and his wife Molly McNearney welcomed their second child, a son Billy on Friday, April 21 but it was anything but easy. Kimmel explained that only a few hours after the baby boy was born, doctors and nurses noticed something was wrong and discovered the newborn had a heart disease that required open heart surgery.

“My wife was in bed relaxing, a very attentive nurse at Cedars-Sinai heard a murmur in his heart and noticed he was a bit purple, which is not common. [Nurses] determined he wasn’t getting enough oxygen in his blood, either in his heart or lungs… It’s a terrifying thing, you know my wife is back in the recovery room, she had no idea what’s going on.”

Kimmel continued through tears, “On Monday morning Dr. Vaughn Starnes opened his chest and fixed one of the two defects in his heart. He went in there with a scalpel and did some kind of magic that I couldn’t even begin to explain. He opened the valve, and the operation was a success. It was the longest three hours of my life.”

Thanks to the surgery, six days after his his birth, Billy was finally able to leave the L.A. hospital and go home with his parents and big sister, Jane. “He’s doing great. He’s eating. He’s sleeping. He peed on his mother today while she was changing his diaper. He’s doing all the things he’s supposed to do. This is the best,” Kimmel proudly proclaimed.

He then made sure to thank the hospital and of course his wife: “This is some place Children’s Hospital Los Angeles. I hope you never have to go there, but if you do, you’ll see so many kids from so many financial backgrounds being cared for so well and with so much compassion,” he explained. “I’ve been supporting Children’s Hospital for years. I had no idea we’d ever wind up there.”

“Most of all I want to thank my wife, Molly. First of all, for allowing me to have sex with her in the first place,” Jimmy joked. “That was huge right there. So few have done that. But also for being so strong and levelheaded and positive and loving during the worst nightmare a new mother could experience. I couldn’t ask for a better partner. I’m so happy we had this baby together. I’m definitely getting a vasectomy after this.”