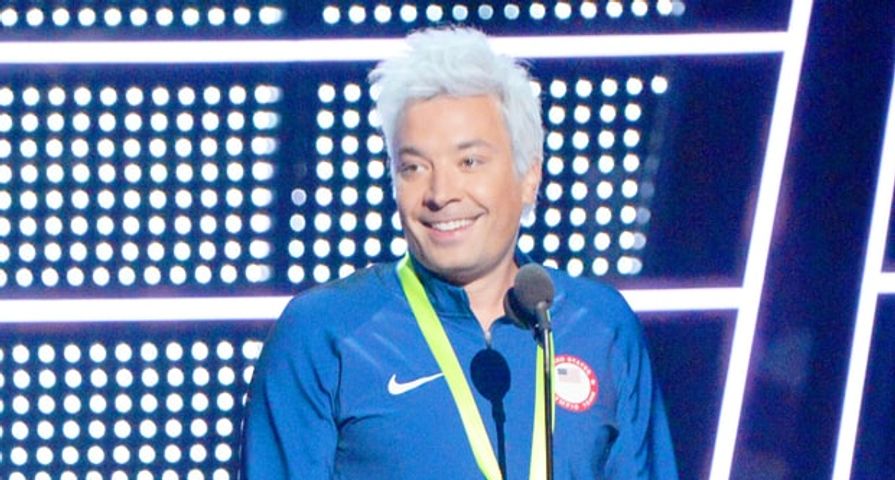 Leave it to Jimmy Fallon to make fun of the biggest scandal to hit the Rio Olympics while presenting the award for Video of the Year at the MTV Video Music Awards on Sunday, August 28.

The hilarious late night host dressed in blue athletic gear and made sure to sport Lochte’s signature icy blonde hair and didn’t shy away from referencing Lochte’s robbery debacle when presenting the five artists up for the award including Justin Bieber, Adele. Kanye West, Drake and Beyonce.

As the 41-year-old made his big entrance to the stage, Lochte’s fellow Team USA swimmer, Michael Phelps, couldn’t help but make sure to get a picture.

“Is it too late now to say sorry?” Fallon began, singing the lyrics to Bieber’s hit song, and poking fun at Lochte’s lie. “That’s my jam, that’s my jam. It should be my jam. I wrote that song. I did it. I produced it. I directed the video. I did. It happened. In fact, I directed all five nominees for Video of the Year.”

He continued, by bringing up all the nominees: “What an amazing year I’ve had, it’s true. I’m the one who gave Adele the flip phone, hello? … I need to Hotline Bling that thing. I had a 30-way with Kanye West. What a year I’ve had. I made Lemonade with Queen Bey. I’m Reezy with the good hair, come on! Anyway, who had the best video of the year, I can’t tell you that,” he concluded before he eventually revealed that Beyonce won the coveted Moonman. “They’re all so great and so talented, I couldn’t choose. I couldn’t tell you even if there was a gun to my head. Which there isn’t, but I couldn’t choose — I still couldn’t choose.”