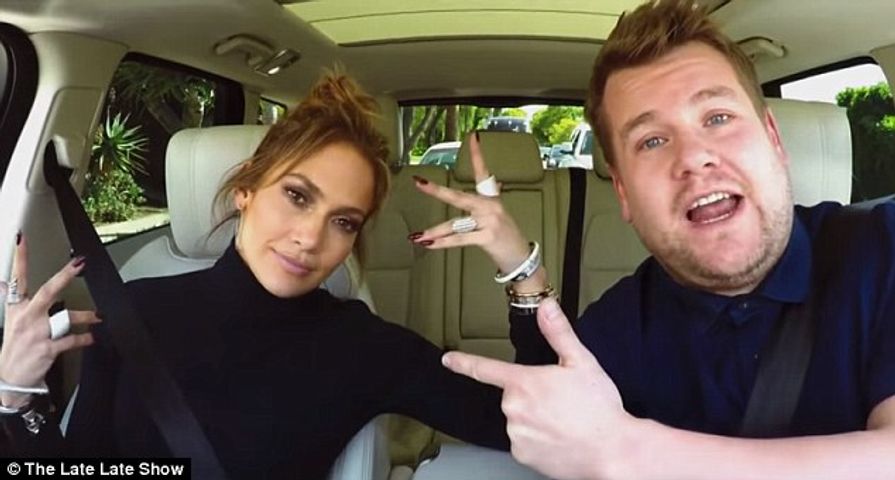 The latest guest on James Corden’s “Carpool Karaoke” was none other than actress and singer, Jennifer Lopez. The CBS show aired Tuesday on a Karaoke primetime special on the Late Late Show. The duo belted out some of J Lo’s best hits like “Jenny from the Block” and “Booty,” but in between songs chatted about everything from romantic proposals to her celebrity contacts.

The 46-year-old singer revealed a lot of juicy stuff like the fact that she’s be married three times (which we all know), but that she’s been proposed to on five different occasions, but the biggest dish was about the contact list in her phone. She listed off a few big names like Demi Lovato, Chris Brown, Bradley Cooper, Dwayne “The Rock” Johnson, Fergie, Iggy Azalea and Cristiano Ronaldo.

However, Corden could not resist some fun when he found Leonardo DiCaprio’s number on her phone. He quickly pulled the car over and decided he must send a text to Leo. He typed, “Hey Leo,” but then changed it when she said, “Don’t say Leo because I would never say Leo!” so he reworded it to, “Hey baby, I’m kind of feeling like I need to cut loose. Any suggestions? Let me know. J.Lo, you know, from the block.” Corden got lucky when Leo hilariously responded with, “You mean tonight, boo boo? Club-wise?” Lopez laughed and said, “He actually thinks I’m serious!” To our dismay, Lopez said she would not be hitting up the club with Leo later and would be going home to cook dinner with her kids.