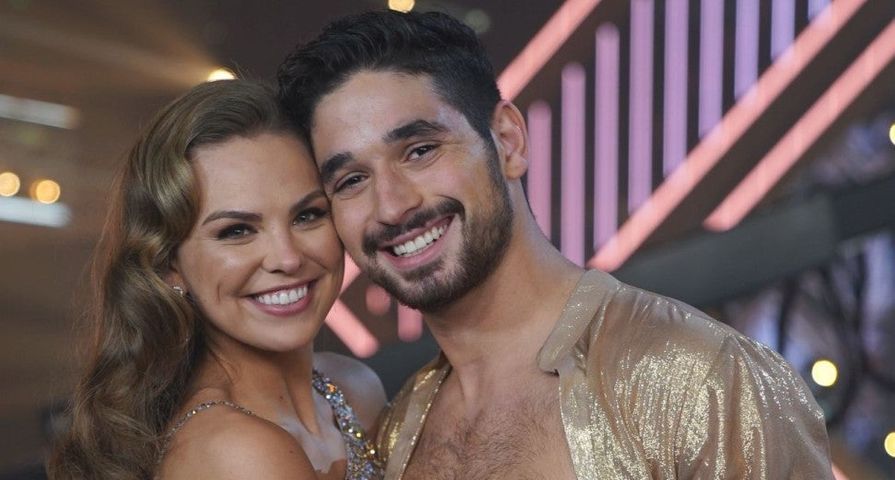 On the season 28 finale of Dancing With the Stars, Hannah Brown and her pro partner Alan Bersten were crowned the winners, and shortly after opened up about being the new Mirror Ball Trophy winners!

“I’m in complete shock. When they said our names, I thought it was for the runner-ups, so I don’t think I even know how to process how I feel right now,” Brown told Entertainment Tonight. “But I’m super thankful for the experience. Even the hard times, the fans just stuck it out with us. I cried a bit earlier today, but I just felt a sense of peace come over me because I knew that I gave it my all … I’ll probably cry later when it actually sinks in.”

“Oh, I cried. I cried like a baby,” chimed in Bersten. “I can’t help but smile! I don’t even know what happened, I blacked out.”

Brown also talked about how she was “so thankful” to her fans for voting and judge Carrie Ann Inaba – who pushed the former Bachelorette star to shine on the stage.

“She knew I had more in me and I think that I really showed that tonight,” she revealed. “I am so thankful for the fans that have been along on this journey. It’s been crazy, it’s been heartbreaking, it’s been exciting and adventurous, but it’s all been worth it. I just thank you so much for supporting me, Bachelor Nation, for coming on this journey with me to Dancing With the Stars.”

“I’m just so thankful. Let’s just keep on the up and up, OK?” Brown continued. “I think I learned that I can be confident. I just felt so empowered on this journey and people have just really have made me feel like this — I sometimes don’t understand why this is happening to me, but the fans and the people who have loved me around this whole experience have made me feel like I do deserve it. Thank you guys. I love you all!”

Entertainment Tonight also reached out to Kel Mitchell and Witney Carson, who placed second in the competition.

“Hey, it’s still a win!” the comedian told the outlet. “It’s all good. We had a blast, it was super fun and it was an awesome journey. No sad faces, we’re good!”

Carson also added that she’s continuously “surprised” by the show.

“I don’t really expect anything,” she confessed. “It’s just kind of how it [played] out. Voters, you know, they knew what they wanted.”

Ally Brooke and Sasha Farber, who placed third, were gushing over Inaba telling the duo that they had the best freestyle dance routine that she’s ever seen in the show’s history.

“My main goal was for Ally to shine tonight, no matter what happened and no matter who won,” said Farber. “Before the dance, I told her, ‘Make sure you shine and love this whole performance.’ And the performance was all about her. She came out, she delivered. I’ve never seen her dance the way she did.”

Country singer Lauren Alaina and her partner Gleb Savchenko were pleased about being placed in fourth.

“I loved our Freestyle so much and we got a perfect score for that!” Savchenko stated.

WE DID IT! thank you all so much!