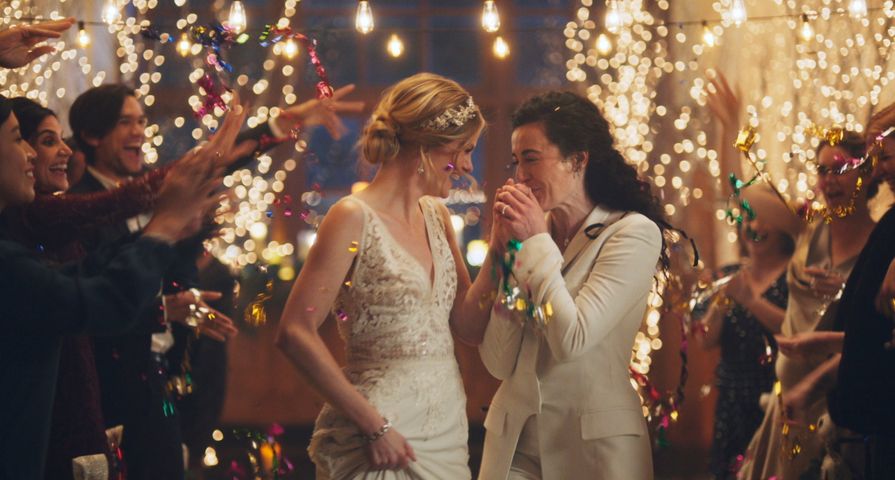 The Hallmark Channel has changed its decision to reinstate same-sex wedding ads after pulling them off the air after receiving backlash from celebrities and the public. The commercials aired featured same-sex couples kissing at their weddings.

“The Crown Media team has been agonizing over this decision as we’ve seen the hurt it has unintentionally caused. Said simply, they believe this was the wrong decision,” said Mike Perry, President and CEO, Hallmark Cards, Inc., in a statement.

“Our mission is rooted in helping all people connect, celebrate traditions, and be inspired to capture meaningful moments in their lives,” the statement continued. “Anything that detracts from this purpose is not who we are. We are truly sorry for the hurt and disappointment this has caused.”

Ads from Zola, a wedding planning website, first appeared on the Hallmark Channel on December 2, according to The New York Times, showing the couples – many of them same-sex females – standing at the altar and wondered if their guests would have arrived on time and bought them better gifts had they used the wedding planning website. The couples then eventually kiss while they celebrated their love with their loved ones.

However, One Million Moms, a division of the conservative American Family Association, posted a petition urging the channel to remove only the ads featuring same-sex couples. In a statement from Crown Media Family Networks on Friday verified the decision to pull the ads, stating: “The debate surrounding these commercials on all sides was distracting from the purpose of our network, which is to provide entertainment value.”

Then on Sunday evening, Hallmark apologized for removing the commercials of the same-sex couples and announced that the network would work closely with GLAAD to “better represent the LGBTQ community across our portfolio of brands.” The press release also added: “Hallmark will be reaching out to Zola to reestablish our partnership and reinstate the commercials.”

“Across our brand, we will continue to look for ways to be more inclusive and celebrate our differences,” Perry said.

“The Hallmark Channel’s decision to correct its mistake sends an important message to LGBTQ people and represents a major loss for fringe organizations, like One Million Moms, whose sole purpose is to hurt families like mine,” she said. “LGBTQ people are, and will continue to be a part of advertisements and family programming and that will never change. GLAAD exists to hold brands like The Hallmark Channel accountable when they make discriminatory decisions and to proactively ensure families of all kinds are represented in fair and accurate ways.”

Before Hallmark released its apology, Mike Chi, the Chief Marketing Officer at Zola, revealed to The New York Times that he did not believe the same-sex kiss was the issue for the network. “The only difference between the commercials that were flagged and the ones that were approved was that the commercials that did not meet Hallmark’s standards included a lesbian couple kissing,” he told the publication. “Hallmark approved a commercial where a heterosexual couple kissed. All kisses, couples and marriages are equal celebrations of love and we will no longer be advertising on Hallmark.”

Among those who expressed their disappointment over Hallmark’s removal of the Zola ads was Ellen DeGeneres, who tweeted, “isn’t it almost 2020? @hallmarkchannel, @billabbottHC… what are you thinking? Please explain. We’re all ears.”