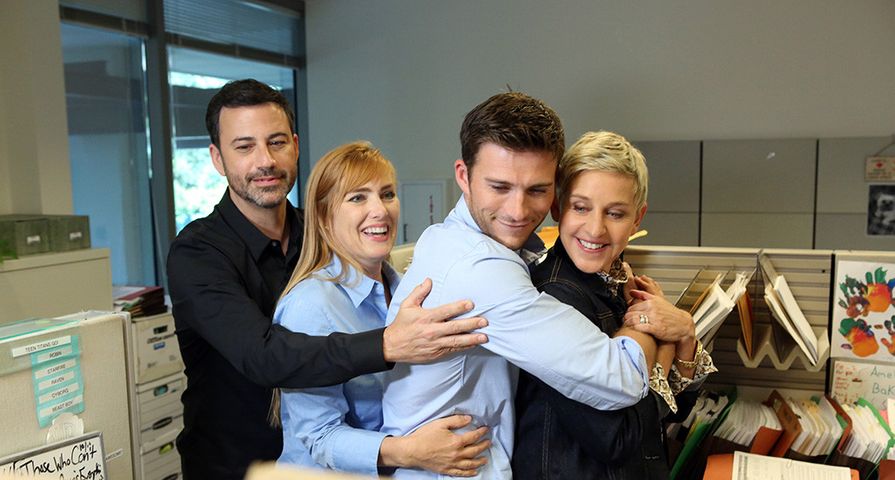 7 Most Iconic Moments For Jon Stewart and The Daily Show
Michael Rozman/Warner Bros.

It really just wasn’t fair to Jimmy Kimmel, but he was a good sport!

On Thursday, September 15, the handsome Scott Eastwood visited Ellen DeGeneres in promotion of his new film Snowden, but fans were also treated to a visit from the Emmy’s 2016 host Jimmy Kimmel as well.

With two lovable men as her guests, Ellen decided to playfully and honestly unfairly pit Kimmel, 48, against Eastwood, 30, in a hilarious game of “Who’d You Rather?” as the trio toured around the Warner Bros. lot. They first bumped into a group of tourists taking a tour of the lot in a tram, and they unanimously all picked Scott to Kimmel’s dismay. “I don’t want to be spiteful, but I don’t have to travel in a tram. I have my own car, OK?” he jokingly said to them and sarcastically added, “I feel great! It’s a real picker-upper.”

Unfortunately, things didn’t get better for the late night host as it seemed everyone picked Scott over him, and Scott was working it too, giving some of the office workers his best smolder. “Are you smoldering?” Jimmy asked the young actor. “I’m putting on my best moves, Jimmy,” he replied, and proceeded to try to teach Kimmel how to smolder, but it didn’t go well until Kimmel finally yelled, “Sorry! My father isn’t Clint Eastwood!”

They finally encountered someone who seemingly couldn’t make the decision so easy, telling Kimmel, “He looks like he has a comfortable bed at home. I always see it on your show.” Seeing someone leaning towards him, Jimmy said, “I have a very comfortable bed!” and added, “Scott sleeps on rocks.” The woman was hesitant, however, because “people are always dancing on it,” referring to all the stars that infiltrate Kimmel’s bed on Jimmy Kimmel Live! “Sometimes there are dancers on my bed. Do you ever have dancers on your bed?” he asked Scott, who slyly replied, “I’ve had a couple dancers on my bed.”