Dancing With The Stars Season 24: Band Bands Vs. Girl Groups 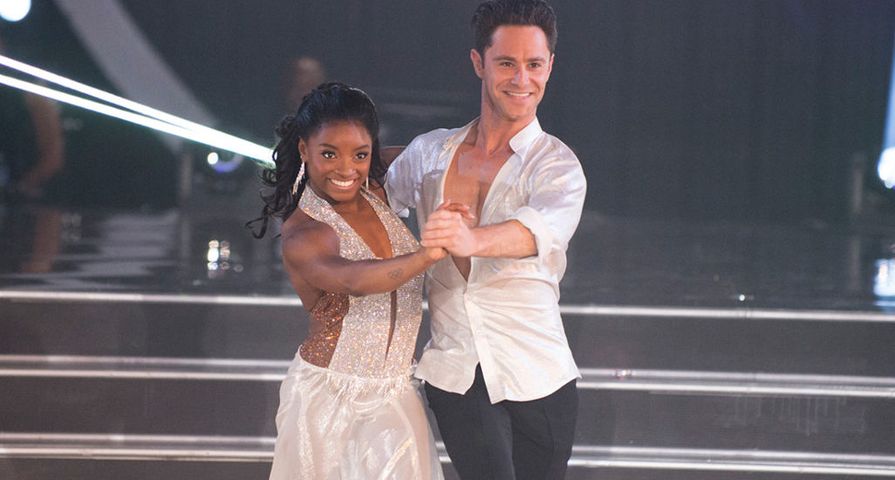 Tonight we witnessed the ultimate battle, Boy Bands vs Girl Groups on Dancing with the Stars. None other than Backstreet Boys member Nick Carter was a guest judge.

Simone and Sasha kicked off the night with a seductive samba to “Survivor” by Destiny’s Child. Although a bit rocky at the beginning, the pair was able to come together to perform, as Bruno said, a sassy samba. They scored 35/40.

Bonner and Sharna made the guest judge proud by dancing a rumba to “I Want It That Way” by, of course, Backstreet Boys. The duo showed their unending chemistry by managing to stay in sync regardless of a prop wall used during the beginning of the performances. Bonner was encouraged to let dance take over, however it must be noted that due to a paralyzing bull riding accident last year, Bonner is facing physical limitations that many of the other dancers are not. The pair scored 30/40.

Nancy and Artem tackled the very challenging Paso Doblé to “Free Your Mind” by En Vogue. Nancy brought on a dominating stage presence and the pair crushed the dance in flurry of twirls and kicks. Points were deducted for technical problems caused by an intro that involved Nancy in a cage, seriously, this performance was nothing like we’ve seen from her before. The duo earned a 33/40.

Nick and Peta jived their way to the tune of “Fun, Fun, Fun” by The Beach Boys. The performance honestly was underwhelming compared to the fierceness brought in dances earlier tonight. Nick has yet to truly loosen up on stage and establish a presence in the competition. This all seemed to be noticed by the judges as the dance was given a 28/40.

Normani and Val owned the stage in a salsa to “When I Grow Up” by The Pussycat Dolls.  The dance was sharp, intense, and involved Normani being projected into a flip and landing in splits. The high energy and explosive performance earned a 38/40 with only Len giving an 8 (apparently too much hip hop).

David and Lindsay performed an Argentine Tango to “I Want You Back” by NSYNC. There was one absolutely terrifying moment in which it looked like David was about to drop Lindsay. It was clearly difficult for David and Lindsay to really display that romantic and sultry vibe that comes with a tango. David attributed this hesitancy and awkward performance to the age difference, declaring that Lindsay was like a daughter. The pair were given a 29/40.

Rashad and Emma Tangoed to “Reach Out, I’ll Be There” by The Four Tops. Rashad danced his heart out in a performance that blew last week’s out of the water. Each move was tight and confident making this one of Rashad’s best dances of the competition so far. Clearly the comments from last week really pushed the duo to bring their A-Game as they scored 37/40.

Heather and Maks performed a Rumba to “Waterfalls” by TLC. This was easily the best performance of the night. Not only is Maks finally back after healing a leg injury for several weeks. The performance told a story of Maks stealing Heather back from Alan, which fit perfectly for Maks’ return to the stage. They received the first perfect score of the season and it was definitely well earned.

The boys performed a frestyle dance to a medley of “Dancing Machine” by Jackson 5, “You Got It (The Right Stuff)” by New kids on the Block, and “Best Song Ever” by One Direction. The girls freestyled to “My Boyfriend’s Back” by The Chiffons, “No Scrubs” by TLC and “BO$$” by Fifth Harmony. The team dances were extremely fun to watch and although they don’t technically count, the girls team won with a 34/40 beating the boys by 1 point.

However, the festivities had to come to a close with what I personally think is one of the most outrageous eliminations in a long while. Nancy and Heather were up for elimination at the end of the night. However, it was Heather and Maks who were the ones to be sent home. The audience loudly protested the final decision and I’m sure many viewers at home would have agreed that after the amazing performance they gave tonight, they did not deserve to be sent home.

Stay tuned to find out who will be eliminated during next week’s, “A Night at the Movies”!