Dancing With The Stars: A Night At The Movies 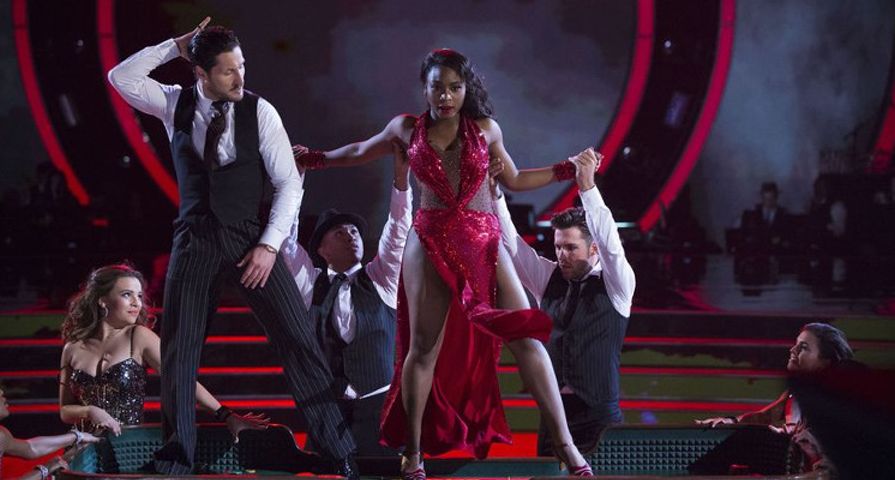 Tonight we took a trip to the movies as each dance was inspired by a different movie genre. The stars brought their A game and you could clearly see enormous improvement in all dances. However tonight was also the night of double elimination and a dance off. Not only did each celebrity have to learn their main dance of the night, they had to learn 3 extra for the dance off. The dances the competitors could choose from were, cha cha, rumba, and jive.

Bonner and Sharna led the night with a playful tribute to old Western movies through a paso doble. The majority of the number wasn’t dancing as Len stated however Bonner did come out with “all guns blazing, firing from the hip”. Although the number had energy, the lack of paso doble moves definitely affected the judges opinion of the performance. They scored 29/40.

Nancy and Artem portrayed the love and romance found in the romance movie genre an absolutely gorgeous tango number. Nancy was the epitome of grace and guest judge, choreographer Mandy Moore, was in awe of Kerrigan’s beautiful footwork. Since last week’s paso doble Nancy has become a whole new force on the show, one that although more relaxed on stage, is still fiery. They scored 36/40.

Simone and Sasha paid homage to silent films with a fun Charleston. The dance was fast paced with intense foot work, and the pair totally nailed it! Bruno seemed to be so in awe of the performance that when it came to commentary, he couldn’t form full sentences. Mandy noticed that although Simone perfectly executes her dances, she seems to go on autopilot. Many encouraged the young gymnast to enjoy the moments, open up more on stage and they will go far. The duo scored 37/40.

Nick and Peta danced an Argentine tango to spy story line inspired by action movies. I was blown away by Nick’s performance, not because it technically flawless, but because this is the most loose we have seen Nick on stage. Nick has come such a long way from the first week and as Mandy stated, this was the first time instead of watching Nick we were watching a dancer. The pair scored 34/40.

David and Lindsay performed a sci-fi salsa. After last week’s dance when David nearly dropped Lindsay, many were skeptical for this week. During rehearsals we watched David throw Lindsay over his shoulder and drop her, needless to say my nerves were through the roof. However they came out confident and nailed each lift! Bruno mentioned that David’s hip action resembled R2D2 more than a salsa dancer and Mandy declared David lacked the salsa’s spicy energy. The couple scored 32/40.

Rashad and Emma created a paso doble inspired by horror films. The pair told a beautiful, although creepy story through their movements in a passionate dance. Len had some of the kindest words stating that the music (O Fortuna) was epic, and so was the dancing. They scored 37/40.

Normani and Valentin came out full force in an Argentine tango dedicated to foreign films. In the before scenes we learned that the excessive dancing has caused Normani to develop a serious lower back strain that requires medication and dance alterations. However during their performance each movement was so fierce and dedicated you couldn’t have known the singer was in any pain. In one word, the dance was spicy. It was everything a tango needs to be. The duo scored a perfect score of 40/40 and won immunity for tonight’s eliminations.

Simone chose to go up against Nancy, and Nancy chose for the two to dance the cha cha. The Judges unanimously decided Simone gave the better performance, America agreed as Simone won 63% of their vote. Simone and Sasha won the dance off which earned them an extra 2 points.

Rashad decided to challenge David, David chose for the athletes to dance to a jive. Rashad won the people’s vote with a 54% proving America thought the two were evenly matched.  However the judges all chose Rashad as the better dancer giving him and Emma the 2 extra points.

Bonner and Nick left together with the Rumba, and although challenging, each contestant brought their A game. For both celebrities many comments have been focused on how “stiff” they can be while performing. However the both demonstrated a confidence and relaxed nature during their dance off performances. In the end America and all judges except for Bruno voted Bonner as the better performer.

Due to having the lowest scores and votes from Amercia for last week’s performance Nancy Kerrigan and Nick Vial were sent home. Both clearly seemed disappointed being sent home so close to the finish line. Audience members were upset to see Kerrigan’s pure talent be sent home, and frustrated to lose Nick after he showed such exponential progress. Stay Tuned next week for you Dancing with the Stars updates!