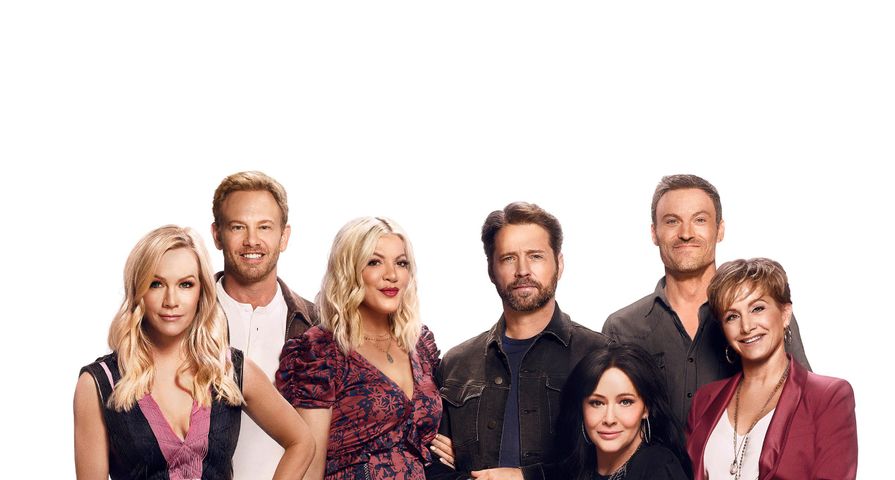 The cast of BH90210 said goodbye to the revival – but teased to fans about its possible return – after Fox announced the series cancelation after one season.

“We are so proud to have reunited in a very special summer event one of the network’s legacy series and casts with 90210 fans across the country,” Fox said in a statement about the series on November 7. “Profound thanks to and respect for Brian [Austin Green], Gabrielle [Carteris], Ian [Ziering], Jason [Priestley], Jennie [Garth], Shannen [Doherty] and Tori [Spelling], who, along with the entire crew and everyone at FOX and CBS Television Studios, poured their hearts and souls into this truly inventive and nostalgic revival.”

When a fan asked Green about if the show would return for a second season, a day before Fox announced the cancelation of the show, he responded with, “No more. Sorry.”

The actor then posted a photo to Instagram of the Peach Pit set and wrote on November 7, “What a fun trip back. Thanks to the fans.”

BH90210 was a six-episode series that followed Spelling, Garth, Ziering, Doherty, Priestley and Carteris as they attempted to revive Beverly Hills, 90210. The cast portrayed exaggerated versions of their real-life selves instead of their fictional counterparts from the original show.

“I think we should just focus on the six because — no projecting into the future. Right now, it’s this very awesome miniseries special event that’s very cool, and I personally love that because I think the audience gets in, they get that flavor of all of us, what they wanted to see us doing, they get some nostalgia in there for summer. It’s the perfect summer thing,” Doherty told Us Weekly in August 2019 about BH90210‘s second season.

However, Spelling was excited to think about the show’s possible future. “We would love to continue to work together,” Spelling said at the TV Critics Association’s summer press tour in August. “It’s been such an amazing experience. I liken it to high school when you think, ‘Oh, you never get a chance to do a do-over,’ and there are things that you know now that you didn’t know then that you would’ve done differently and we get that opportunity.”

Garth and Spelling teased fans with cryptic social posts about how the show could potentially find a new home on a different network or streaming service.

“Sometimes home isn’t where you ARE but who you are WITH,” Spelling posted to Instagram on November 7. “Together, our #bh90210 family can do anything. We’ve proved that to each other and our loyal fans. We ARE better together. Our show is so meta that all the reality out there just helps us continue to evolve and gives us GREAT new storylines! The gift that keeps on giving. We aim to keep audiences guessing what will happen next. So stay tuned as our journey unfolds…”

“Summers highest-rated show gets more meta by the minute #bh90210 practically writes itself,” Garth tweeted on November 7. “Thank you for the 2nd season material. You never know what’s really going on behind the scenes! Stay tuned…”

Meanwhile, Carteris told Us Weekly exclusively that the options for a second season are being considered.