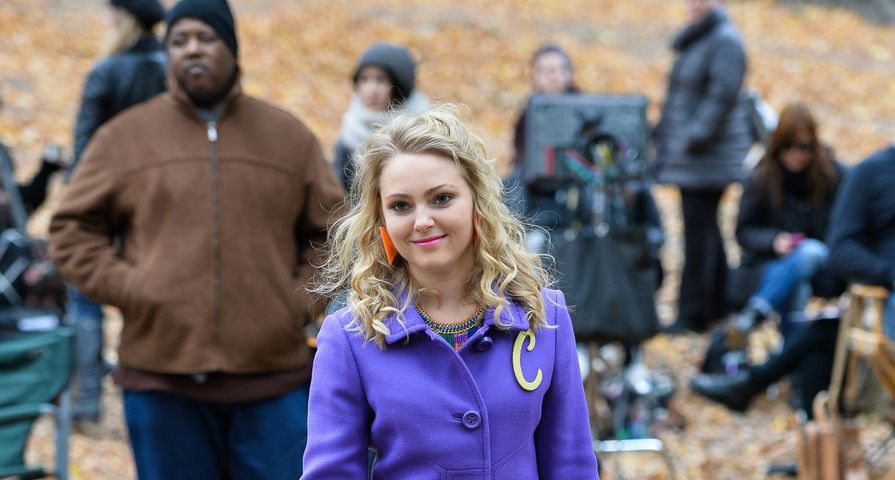 There’s no denying that Carrie Bradshaw is the ultimate television style icon. She isn’t afraid to take risks when it comes to fashion and makes bold style statements each episode — and this is no different when it comes to her prequel series, The Carrie Diaries! Although the show was cancelled, the two seasons of Carrie via 1980’s trends was pure fashion envy! The show follows Carrie as she makes her initial move to New York and rings true to her original style from Sex and the City with an added twist of youthfulness and spunk. Fluorescent colors, chunky jewelry and vintage pieces come in no shortage, so follow along for 8 of our favorite Carrie Diaries style moments from it’s two season run:

Carrie’s signature style piece in Sex and the City was her monogram Carrie chain necklace that created a revolution back in the ’90s. It seems that Carrie’s propensity for customization began at an early age with the “Carrie” tote that she rocks on a regular basis in The Carrie Diaries. In the pilot episode she is shown creating the masterpiece in do-it-yourself fashion with nail polish and we love this crafty side to her fashion sense. This outfit is quite tame in comparison to some of her later fashion creations, but Carrie was definitely on the right track with this floral blouse and custom bag which later flourishes into the bold prints and statement shoes we see her in.

Although it’s typically recommended by stylists to allow one statement piece to steal the show, Carrie definitely doesn’t follow this fashion advisory and we love that about her! With this look she pairs both a dark floral coat, bright aqua-colored shoes and printed tights together to make a memorable fashion moment. Her multi-colored necklace picks up on all the variety of shades composed in this outfit and pulls everything together perfectly!

Although Carrie often opts for bold colors, she definitely does so strategically and in a fashion-forward way! Upon closer look, it’s clear that all the colors coordinate flawlessly. The printed floral skirt comprised of shades of tangerine and turquoise picks up on the similar coloring of her striped sweater. Additionally, the mustard shade of her platform block heels is the perfect complement to her printed mini bag.

With this look, it’s clear that Carrie has always had a love for tutus beginning in her teenage years! The printed skirt is comprised of layers of tulle to give it a ballerina effect and she kept the look in the citrus tones by pairing the skirt with a pale yellow blouse and peach-colored belt. She topped the look off with yet another color, periwinkle blue heels, which is all tied together with her checkered bag that brings together the shades of red from the skirt and blue from the heels!

The statement outerwear looks of Carrie Bradshaw came in no shortage during the fall episodes of the series! The lavender trench coat is bold and unique, especially with the embossed “C” broach that she added onto it in typical Carrie fashion. The hot pink tights are very Gossip Girl-chic yet the florescent fluffy bag and orange hoop earrings definitely ring true to the ’80s vibe of the show.

The curve-hugging neon ensemble that Carrie rocked while strutting along the streets of New York is undeniably ’80s inspired. The look features a fluorescent aztec print which is mixed with edgy black cut outs and a thigh-skimming hemline. She paired the bold dress with color blocked pumps, a coordinating hot pink bag and an ’80’s inspired funky updo in her blonde tresses. This bodycon dress style is definitely a classic Carrie and is a look that she brings with her into her later years, but with more neutral prints and solid colors.

Carrie’s take on classic peplum undeniably proves her to be be a daring fashionista! Typically peplum tops are a difficult shape to pull off, which means that sticking to a neutral color like black or white is a common strategy. Not for Bradshaw, however, as she rocks this multi-color jewel toned dress paired with a complimentary turquoise statement necklace, cobalt blue clutch and eye-catching neon heels.

In the original Sex and The City series, Carrie became known for her body-flattering crop tops and short skirts. Despite being a middle-aged woman, Carrie proved that aging doesn’t have to mean growing more modest. It’s clear that Carrie’s love for revealing hemlines began during her teenage years in The Carrie Diaries with a look like this! She layered these adorable cutoff overalls on top of a multi-color, off-the-shoulder crop top while attending a music festival in New York. She paired the look with printed wedges and fluorescent orange earrings, making this a fashion-forward and very Bradshaw look!