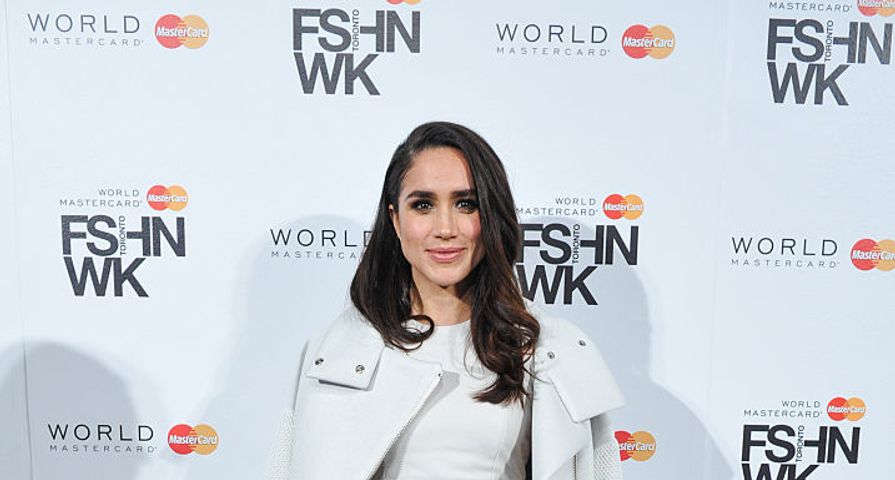 It comes as no surprise that ever since Meghan Markle joined the Royal family her style has taken a significant shift. There are quite a few items of clothing that Markle has been forced to retire in favor of a new, more modest wardrobe than that of her red carpet days. Follow along for 20 things that Meghan Markle isn’t allowed to wear now that she’s a Royal:

While Louboutin heels may be a coveted look in the Hollywood world, they certainly aren’t when it comes to the British royals. Once Meghan became a member of the Royal family, she retired her sultry red-soles and swapped them out for more subtle Aquazzura heels and classic Manolo Blahniks.

(Photo by Paul A. Hebert/Getty Images)

Red lipstick screams old Hollywood glamour, but it may not be the best choice of color for a Duchess! The Royal family tends to favor neutral pinks and nudes when it comes to lip colors, so we’ve definitely noticed Markle putting her red tubes to rest in favor of more subtle colors.

Crop tops are a trendy, unexpected way to show some skin in the world of Hollywood, but not so much for the Royals! While Markle may have loved the belly-baring tops like this pencil skirt and crop top combo in her former Fashion Week days, we certainly wouldn’t see her step out wearing something like this in her new Duchess role.

Denim isn’t completely off the table with royals, and most notably, when Kate joined the family we noticed a subtle transition into more casual streetwear when appropriate. Kate, however, often opts for polished dark denim in a tailored skinny fit that comes across rather professional. Markle definitely has her own approach when it comes to denim and was spotted on her first public appearance with Harry wearing jeans with rips on the knees. Since their official wedding day, we haven’t seen Meghan wear ripped denim since.

During her actress days, Markle was known for having an edgy yet sophisticated sense of style. She loved to incorporate leather jackets into her outfits, even some as bold as this gold-bedazzled look. Unfortunately, she had to trade in her leather jackets for more polished textures like wool and tweed once she became a Duchess.

As an avid yogi and fitness enthusiast, Meghan definitely has a variety of leggings in her wardrobe. While leggings may have previously been acceptable to wear in public as athleisure, this is definitely not the case now that she’s a Duchess! The most casual look she could likely get away with is a pair of dark skinny jeans.

We’ve seen Markle favor sequins in her Duchess role, but the look consisted of a high neckline and long sleeves for modesty. In her Hollywood days, Markle didn’t hold back when it came to sequins and even rocked a little black sequined dress with a sultry off-the-shoulder neckline at one point!

It’s rare to see a royal woman step out wearing anything even remotely suggestive, which is why Meghan has put to rest her days of dresses with slits. While this little black dress may not at all be questionable for an actress, there is definitely a different standard of dressing when it comes to being a Duchess.

To go along with her edgy style, Meghan Markle is undeniably a huge fan of a gunmetal smoky eye! Prior to her royal linkage, Markle’s signature makeup look was glowy skin, a natural lip color, and a contrasting dark lid look. Royals such as Queen Elizabeth and Kate Middleton are huge fans of the minimalist, natural makeup look, similar to their nail color, so we’re quite certain a dramatic eye look like the smokey eye won’t get the royal stamp of approval for Markle anytime soon!

When Markle first began her public appearances as a Royal, she favored her signature messy bun which gained high criticism from the public. The Royal family is known for its polished and proper ways, especially when it comes to grooming. Kate Middleton never steps out without her shiny locks perfectly coiffed or her updos tucked into a sheer hairnet, which she most likely learned from her role model Queen Elizabeth. Since the intense criticism she’s gotten for the messy buns, we’ve noticed that she’s begun to favor sleeker, polished hairstyles which may mean the days of her laid-back buns have passed.

Avid royal fans were appalled when Meghan Markle stepped out to announce her engagement breaking one of the most expected royal style rules — always wear stockings! Kate Middleton and Queen Elizabeth are both avid fans of a short tea dress, but always ensure to keep their look discreet by pairing sheer stockings underneath. While Meghan made this mistake once on her engagement appearance, she quickly got the hint and began wearing stockings.

Of all the Hollywood actresses, Meghan Markle has always been on the more modest side when it comes to fashion, but that’s not to say she’s by any means a stranger to a short hemline or two. By Hollywood standards, this neutral pencil skirt isn’t anything jaw-dropping, but in royalty, a knee-baring hemline like this definitely isn’t acceptable for Markle anymore!

It’s rare to see the Duchess of Cambridge Kate Middleton wearing exaggerated costume jewelry of any sort. Instead, Kate often opts for dainty diamonds or pearls, which is a transition that Meghan Markle also had to make when becoming a royal. Based on Markle’s pre-Duchess red carpet appearances, she tended to favor an edgier wardrobe, so statement jewelry may have been a difficult trend for her to give up!

Even details as minimal as nail polish were also factors that Markle had to take into consideration when joining the Royal family! The ever-polished Kate Middleton has shockingly never been photographed wearing nail polish and Queen Elizabeth has maintained a soft pink manicure regime for over 30 years. Based on the beauty track record of her predecessors, we’re quite certain we won’t see Markle step out anytime soon with anything even close to black polish on her nails!

Due to her California roots, Meghan Markle has been influenced by the laidback vibe of the area and has favored casual pieces like baseball caps in her pre-royal days. While Markle loved to rock baseball caps on casual airport trips or while walking to the gym, this definitely isn’t a style we’ve seen her wear since becoming a royal! Her days of baseball caps have officially been swapped out for fancy fascinators.

During her time living in the big city of Toronto, Meghan loved to rock a tote bag to carry around all her belongings for a full day of work. Nowadays, a tote bag would be far too casual for her new Duchess title. Instead, she opts for small top-handle bags and clutches when making public appearances.

Slinky, satin dresses are a staple in the Hollywood scene, and Meghan Markle’s wardrobe definitely consisted of a few of these! While we think she looks absolutely gorgeous in this satin magenta number, it’s easy to assume something like this wouldn’t fly in her current Royal wardrobe.

The Queen has openly shared her distaste towards wedge heels in the past and it’s rare to see Duchess Kate or Duchess Meghan step out wearing them. That’s not to say this hasn’t happened on occasion, however! Meghan is photographed here on the Australian Royal tour wearing wedges paired with an ankle-skimming printed dress.

When it comes to tailoring, the Royal family favors items that are prim, proper and timeless. Markle, being the trendsetter she is, hasn’t always followed this standard! During her red carpet days, she definitely leaned towards more bold styles like oversized, wide-leg pants.

While shorts and a blazer may have been a sophisticated look for an actress, unfortunately, that isn’t the case for Meghan’s new Duchess title! Since marrying Prince Harry, we definitely haven’t seen a look like this make an appearance on Markle, despite how great she looks rocking it! 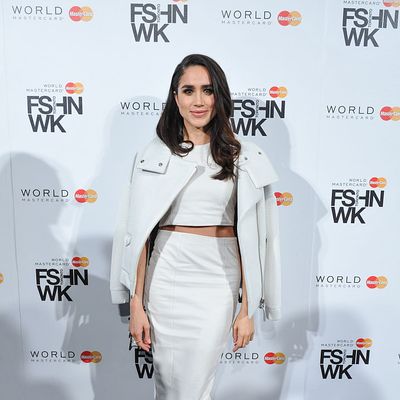