The Royal Family's 14 Best Wimbledon Outfits Of All Time

Princess Eugenie, a cousin of Prince William and Prince Harry, is getting married this coming weekend and in honor of her big day, we’ve rounded up her best royal looks of all time. Princess Eugenie is known for her bold fashion moments, many of which include a statement fascinator, which has become her signature fashion move. She’s a royal who tends to bend the rules by having an Instagram account and wearing shorter hemlines, which makes her fashion choices all the more interesting. Follow along for Princess Eugenie’s 12 best royal looks in anticipation of her royal wedding:

Nearly every royal has been spotted wearing a royal purple dress or two for a public appearance! It’s only suiting since the deep shade of violet connotes power and nobility. We love the royal purple dress worn by Princess Eugenie for the Queen’s Diamond Jubilee Service in 2012. The dress fit her like a glove and she accessorized with a coordinating purple fascinator, which made the Royal fashion moment even more memorable.

Unique fascinators and hats are a favorite of Princess Eugenie, which we appreciate, but we also love when she opts for something simple like this classic cream-colored beret. She stepped out for the Christmas Day Service at St Mary Magdalene’s Church and paired the beret with a neutral peacoat which belted at the waist.

Princess Eugenie gave us major Jackie O vibes when she stepped out to attend Prince Harry and Meghan Markle’s wedding this past May. She wore a simple ’60s-inspired tweed dress which she paired with a white pillbox hat. The look is definitely something we envision Jackie O wearing in the ’60s and we imagine Eugenie used her as the inspiration behind this sartorial decision!

Who says Royalty can’t be trendy too? Princess Eugenie looked both fashion-forward and classic when she stepped out for Gold Awards at Buckingham Palace with her Uncle Edward. She wore a floral print wrap dress that belted at the waist and showed off her hourglass figure but was also professional and polished.

It’s rare to see a Royal stray away from solids and basic prints such as florals and stripes, so heads definitely turned when Princess Eugenie stepped out wearing this abstract-inspired dress for the Serpentine Summer Party in 2017. Her look was totally unique and something we’d never seen any Royal do before, which is exactly why we loved it.

Red is a powerful, statement-making color, which is likely why it’s been favored by quite a few Royal women over the years, Princess Eugenie included! She stepped out to attend the Royal Ascot with her sister wearing a crisp scarlet dress that cinched at the waist and featured soft ruching on the chest. She paired the look with a stunning fascinator which featured matching 3-dimensional red flowers.

One of Princess Eugenie’s most buzzed about looks is the look she wore to a garden party in Buckingham Palace. She opted for an ensemble in a midnight blue shade of navy which featured flattering bell sleeves and a tye around the waist. The true show-stopper, however, was her fascinator which featured the word “love” embellished along the brim.

Emerald green is a classic winter color and Princess Eugenie styled it fabulously when attending a church service at St Lawrence Church. We especially love that this piece is a cape, which adds a glamour factor. She paired the look with a side-tilted beret and classic black tights.

Princess Eugenie is all about taking classic shapes and making them modern — like this trench coat look! Rather than a typical trench coat, Eugenie opted for one with golden buttons and a fit-and-flare shape. The look works fabulously on her shape and is the perfect combination of timeless and stylish.

To announce her engagement this past January to Jack Brooksbank, Princess Eugenie stepped out wearing a flattering floral print dress from Erdem and pointed toe Jimmy Choo heels. The look was feminine, sophisticated and perfectly suited for a Royal engagement announcement!

Princess Eugenie is a big fan of florals and one of our all-time favorites of hers is this periwinkle and forest green number that she wore this past July to a NEXUS Meeting at the UN Headquarters. The look was perfectly tailored to her figure and featured a print that was both fun and professional at the same time.

Our all-time favorite Princess Eugenie look is this sky blue dress she wore to attend a garden party at Buckingham Palace. The look featured a stunning asymmetrical neckline and a multi-color belt which picked up on her tangerine-colored fascinator perfectly. 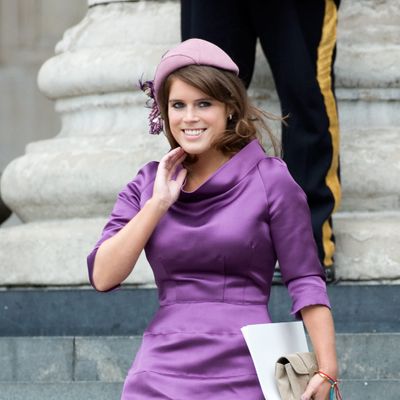