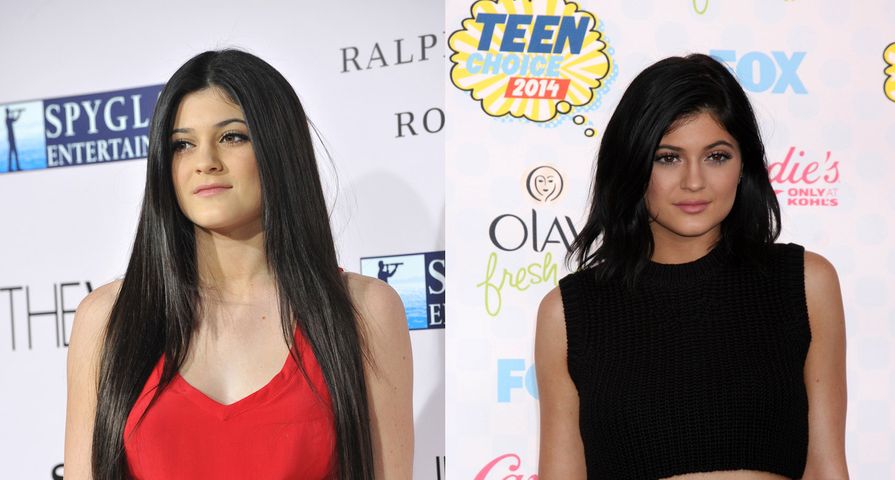 Over the years, there have been a lot of rumors about a lot of young stars tweaking their faces. Many of these young ladies have refused to comment on the allegations or they have totally denied the rumors altogether, which is fine. Unfortunately, some of the photo evidence is pretty damning. It is just too hard at this point to ignore the changes in their faces and bodies. We want you to be the judge. Looking at before and after pictures of these celebrities, do you think that they have had plastic surgery or are we just totally imagining this? Let us know by voting!

Kim Kardashian’s face has changed a lot since she was first introduced to us as Nick Lachey’s plus one. Over the past few years, her skin has become ridiculously tight; her nose is obviously thinner; and she’s obviously putting stuff in her lips to make them fuller. On “Keeping Up with the Kardashians,” we saw her experiment with Botox; however, she insists that she hasn’t done anything else. Do you believe her?

Lindsay Lohan’s face looks a lot different than it did when she was an up and coming Disney star. She had one of the freshest and most beautiful faces around, but that has changed. These days, her lips look pretty swollen and her checks do as well. We can’t help but think Lohan is tweaking her face. What do you think?

Some people think that Hilary Duff has had a nose job and breast augmentation. We don’t know what to think. We’d rather believe that the singer-actress didn’t go down this road. Do you think the rumors are true or is Duff the kind of girl who would never do that?

Selena Gomez reportedly had a boob job this year! Sources say that she got them to impress Justin Bieber, which totally freaked out her fans. Like a lady, the former “Wizards of Waverly” star refused to comment on the allegations. You be the judge! Does it look like Gomez got a boob job or is that just the work of a really good bra?

Taylor Swift is not the type of star to get plastic surgery and tell. A couple of years ago, some top plastic surgeons accused the country star of getting a nose job and breast augmentation. Rather than address the rumors, Swift held her head high, sporting many tight shirts in the process. Do you think it looks like she’s had a boob job?

Blake Lively has reportedly had a nose a job and breast augmentation surgery. Although she has never admitted to having had either procedure, she looks a lot different than she did in “The Sisterhood of the Traveling Pants.” Judging by the pictures, do you think she’s had plastic surgery?

Megan Fox has never admitted to having had any plastic surgery; however, she looks like a very different woman than the one we were introduced to 10 years ago. Some think she’s had nose refinement surgery and some fillers. What do you think? Is this just her aging or is she buying herself the face that she wants?

Kylie Jenner looks a lot different than she did last year and it is kind of scary. Her skin definitely looks tighter and more plastic-like, and her lips look surprisingly fuller. The 17-year-old has denied the claims; however, the proof is in the pictures. Do you think Kylie has been tweaking her face?