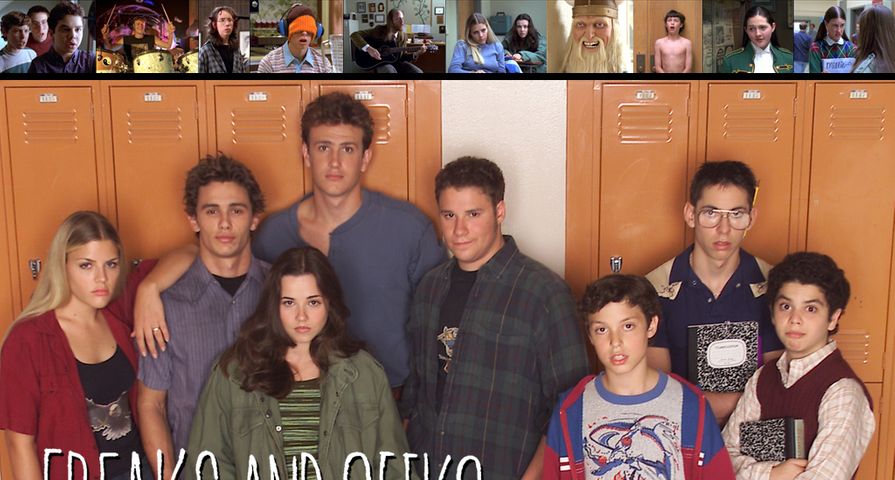 The world of network television can be a notoriously unforgiving landscape in which to tell stories. On the one hand, TV lets writers stretch out a plot and characters over multiple hours and years, allowing room for growth and development that is just not possible in feature films. Unfortunately, if there isn’t a large enough audience tuning in every week, a show risks being cut short before its time no matter how good the writing and characters are. There have been numerous shows that have been cancelled well before their time, whether due to low ratings, poor decisions made by the network, a high budget, or many other reasons. Either way, it’s always sad to see a good show bow out before its time. Here is a list of the 10 Most Disappointing TV Show Cancellations.

Many may not remember this animated show that aired for only 1 season on MTV in the early 2000s. Centring on 4 friends during their 1st year of college, Undergrads was a comedy aimed at adult viewers, and featured many nods to familiar college life experiences and geek culture; one episode featured an extended battle between Star Wars and Star Trek fans, while another revolved around the characters playing the board game Risk. Unfortunately, the show received mixed reviews and didn’t attract a large enough audience to avoid cancellation. It ended up becoming popular in syndicated reruns, making its cancellation all the more unfortunate. Undergrads is definitely a hidden gem among the cancelled TV wasteland and deserves a look for anyone interested in college-age comedy programming.

Although Arrested Development was eventually picked up for renewal by Netflix in 2013, it returned in a different format, and its cancellation in 2006 was still a huge loss for fans of intelligent and original comedic television. Following the dysfunctional Bluth family, Arrested Development was noteworthy for its commitment to intricate jokes and gags and for its excellent ensemble cast featuring Jason Bateman, Michael Cera, and Will Arnett, just to name a few. Every member of the Bluth family was given attention, so that there wasn’t a weak link in the cast. Although the show’s resurrection last year was cause for celebration, it didn’t quite live up to the original run’s pedigree. Each episode focused on a specific character, sacrificing the ensemble dynamic that helped make the show special in the first place.

When The O.C. premiered in the fall of 2003, it became something of a cultural phenomenon. At first glance, it was a typical teen soap featuring rich and beautiful characters, but The O.C quickly established itself as so much more than this. It was smart and funny, and thanks to fan-favourite geek character Seth Cohen –played by Adam Brody – it was an early adopter of the “cool geek” movement that permeates today’s pop culture. It was also a trend-setting show, featuring many indie bands such as Death Cab for Cutie and Modest Mouse that would go on to have very successful careers. Unfortunately, The O.C.’s popularity quickly waned and was cancelled at the end of its 4th season, despite its writing being as strong as ever.

Like most of the shows on this list, Veronica Mars didn’t receive much attention when it initially aired, but grew in popularity and accolades after it was already gone. Kristen Bell played the title role, a teenage amateur detective who investigates her best friend’s murder. The first 2 seasons of the show gave Veronica a case in the first episode that she would spend the entire season solving, which was (and still is) a unique spin on the well-trod detective show. Unfortunately, for whatever reason, the show never really took off. Season 3 switched  to a “case of the week” plot, but it wasn’t enough to save the show. Fortunately, a partially fan-funded film was released in 2014, which may lead to future crimes for the bubbly sleuth to solve.

This series, which only lasted one season, is regularly cited as being one of the first TV shows to accurately portray what being a teenager is really like. Starring a very young Claire Danes (she was only 13 when she was cast) as Angela Chase, a smart and level-headed high school sophomore who, like every other teen, is just trying to find her identity. It may seem surprising now, but a character like Angela was ground-breaking stuff in the mid-90s, and just as significant was the fact that Angela’s parents were given stories of their own, which didn’t happen often with teen dramas. Unfortunately, the 1st season ended on a cliff-hanger on the presumption that it was going to be renewed, leaving the story unfinished. Still, fans will always have an excellent season of real high school drama to look back fondly on.

Following the lives of several college freshmen, Undeclared was created by Judd Apatow, who has gone on to have a tremendously successful film career. A spiritual successor to the Apatow-produced Freaks and Geeks (which is also covered on this list), Undeclared was unfortunately cancelled by Fox after 1 season due to creative differences between Apatow and the network, and numerous timeslot changes that negatively impacted the show’s ratings. The show is noteworthy for its sincere and humorous writing, strong performances from up-and-comers like Jay Baruchel and Seth Rogen, and for accurately depicting what college life is really like. Undeclared is also full of cameos by now-famous actors: Ben Stiller, Jason Segel, and Amy Poehler are just a few of the familiar faces that pop up in this excellent series.

Despite an awful name and questionable premise, the Terminator TV show turned out to be the best thing to happen to the franchise since 1991’s Terminator 2: Judgement Day, the unquestionable highpoint of the series. Lasting only 2 seasons, T:TSCC was anchored by strong performances and surprisingly good storylines, with Summer Glau’s performance as the beautiful but deadly terminator Cameron being the standout. Despite modest viewership ratings, the show’s budget was too high to justify renewal. The show’s final episode didn’t help to ease the pain for the show’s fans, as it ended with a game changing cliffhanger that unfortunately will likely never be resolved. Nonetheless, fans still have 2 seasons of great TV to offset the increasingly abysmal films the franchise continues to put out.

Perhaps the greatest western television series ever created, Deadwood was almost universally praised throughout its too brief 3 season run for its well-written dialogue and characters. Set in the frontier town of Deadwood, South Dakota, in the 1870s, the series followed a large ensemble cast headed by Ian McShane and Timothy Olyphant. As the show aired on HBO, it liberally used violence and profanity in its storytelling to enhance what series creator David Milch saw as the main theme of making order from chaos. Unfortunately, HBO did not order a 4th season, and despite frequent assurances from Milch and the network that two television films were in the works, nothing has materialized and it is now believed to be highly unlikely that the films will ever be made.

An original sci-fi series created by geek idol Joss Whedon, Firefly is legendary in the annals of the cancelled TV show landscape. The show’s network, Fox, infamously aired episodes out of order, which only lead to viewer confusion and apathy. Despite a small, but intensely loyal viewership, Firefly went off the air after 14 episodes, with 3 never even being aired. The deceased series only gained fans after its untimely demise, and strong DVD sales led to a feature film revival in 2005’s Serenity, which gave the plot and characters a proper, if still unsatisfying, send-off. Firefly stories are still being written in graphic novel form, but unfortunately, a proper revival looks more and more unlikely with every passing year.

Freaks and Geeks was a show out of time, in more ways than one. Set in 1980, the series followed the lives of two different groups of outsiders. Equal parts funny and emotionally honest, it stands as one of the best written and acted high school dramas ever. Unfortunately, audiences and the show’s network, NBC, didn’t know what to make of it, resulting in its cancellation after only 18 episodes.  While the cancellation of Freaks and Geeks was heartbreaking, the show’s legacy continues to burn bright and most of the cast and crew have gone on to have very successful careers. James Franco, Seth Rogen, Jason Segel, and Linda Cardellini are just some of the stars who got their big break on Freaks and Geeks.