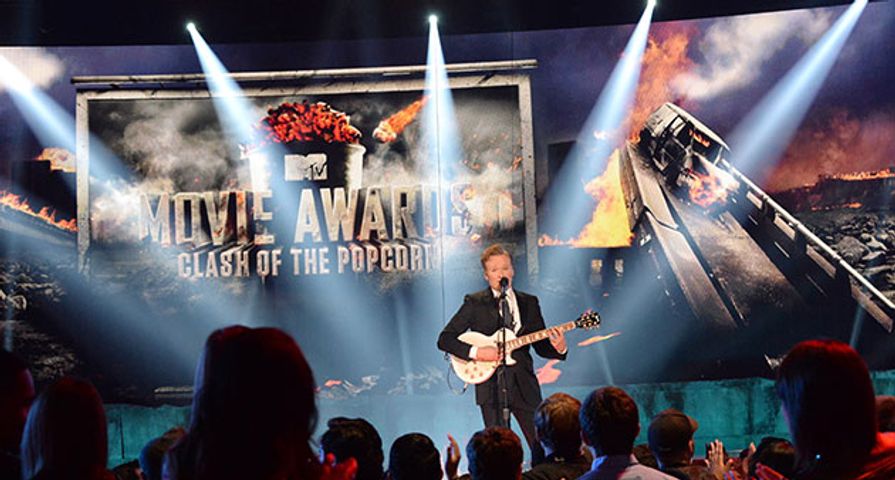 The sequel received the golden popcorn trophy for movie of the year, winning the fan vote over 12 Years a Slave, American Hustle, The Hobbit: The Desolation of Smaug and The Wolf of Wall Street.

One of the film’s stars, Josh Hutcherson, dedicated the honor to the late Philip Seymour Hoffman, who made his Hunger Games debut in Catching Fire.

Hutcherson remarked, “I know if Philip were here, he would really think this is really cool. To have him in our movies was one of the coolest things in the world….We think about him every day on set.”

[ CLICK HERE TO SEE PHOTOS FROM THE RED CARPET ]

Zac Efron received the golden popcorn trophy for best shirtless performance, in That Awkward Moment. While accepting the award, presenter Rita Ora helped him remove his shirt, revealing his six-pack.

Mila Kunis, who’s reportedly expecting a child with Ashton Kutcher, had what appeared to be a small baby bump, but she didn’t mention anything about her relationship or her pregnancy when she picked up the best villain award for Oz The Great and Powerful.

MTV saluted Channing Tatum with its Trailblazer Award, for “boldly paving the way with his unique and diverse path in the film industry.” And Mark Wahlberg was given the MTV Generation Award for engaging the network’s audience throughout his career.

Amanda Seyfried stumbled with her words while presenting the best comedic performance award — won by Jonah Hill — with Seth MacFarlane. She said she couldn’t read the teleprompter well because she wasn’t wearing her contacts.

MacFarlane quipped, “So far this is going about as well as the Oscars,” referring to his controversial turn as host of the Academy Awards in 2013.

The broadcast briefly struck a somber note when Jordana Brewster introduced a tribute to her late Fast and the Furious co-star, Paul Walker. Walker and Vin Diesel were named best on-screen duo, for Fast & Furious 6.

Conan O’Brien hosted the 22nd annual MTV Movie Awards from the Nokia Theatre. The two-hour broadcast began with a taped segment in which he vowed to get 50 celebrity cameos in the show’s open. He was able to pull it off, with the help of Andy Samberg, Seth Rogen, Jessica Alba, Ashton Kutcher, Taylor Swift, Katy Perry, Jack White, Jason Bateman, Martin Scorsese and many more.

The ceremony featured musical performances from Eminem and Rihanna, who delivered a live rendition of their hit, “The Monster”; Zedd and Ellie Goulding, who performed their Divergent songs “Find You” and “Beating Heart”; and the rock duo Twenty One Pilots.

The show also offered a sneak peek at upcoming movies, including X-Men: Days of Future Past, The Amazing Spider-Man 2 and The Fault in Our Stars.

Here are the winners:

Movie of the Year
The Hunger Games: Catching Fire

Orlando Bloom & Evangeline Lilly vs. Orcs, The Hobbit: The Desolation of Smaug

Will Poulter, We’re the Millers

Rihanna, This Is the End