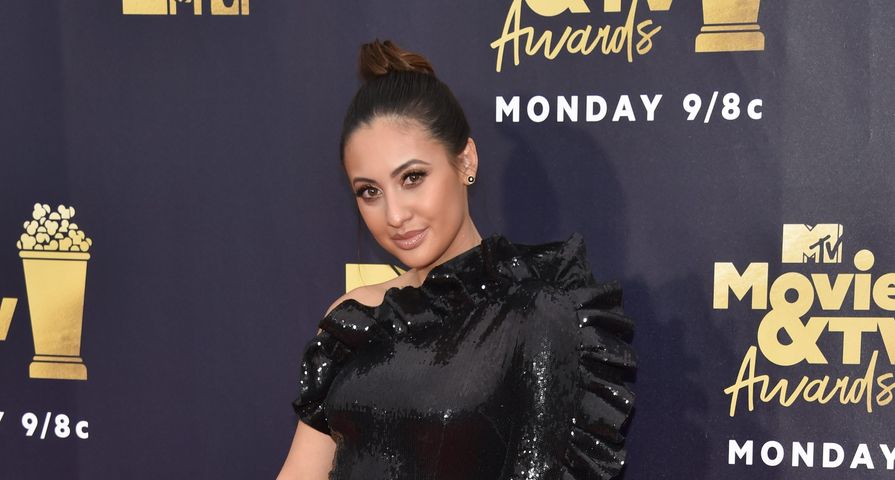 The annual MTV Movie & TV Awards bring together some of the brightest up-and-coming stars for an evening of celebration and honor. This year’s red carpet featured the cast of some of MTV’s most popular shows and movies including Riverdale and 13 Reasons Why! Although we love the actors who star on these shows, we, unfortunately, can’t say the same about some of their fashion choices. Follow along for 12 of the worst-dressed stars from this year’s MTV Movie & TV awards:

Zendaya is typically one of the most well-dressed women on the red carpet, but we’re somewhat conflicted about this chocolate brown dress she wore for the MTV awards. As much as we love the unique and structural skirt of this dress, the color did nothing to highlight her complexion and the shiny texture of the dress was quite obscure. 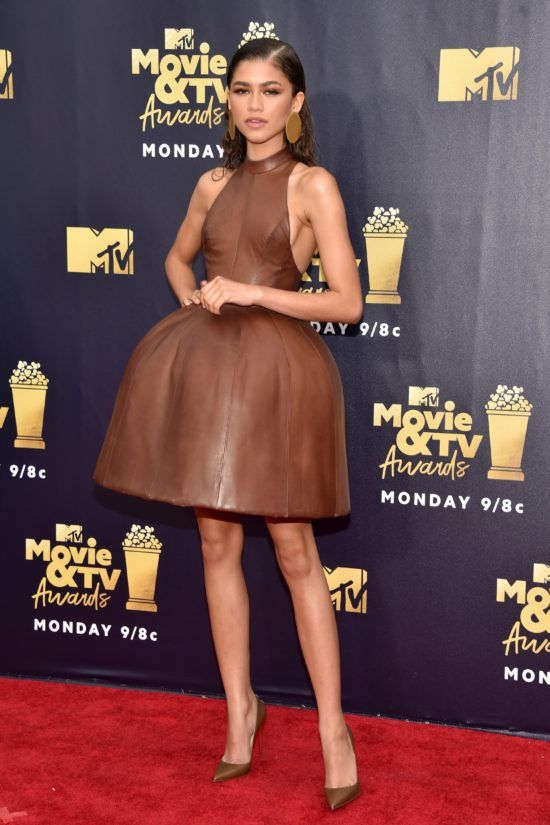 13 Reasons Why breakout star Katherine Langford opted for quite a dramatic look for the MTV awards red carpet. Although we aren’t totally opposed to the textured black gown, the oversized bow on the back of her head was something we just couldn’t overlook. 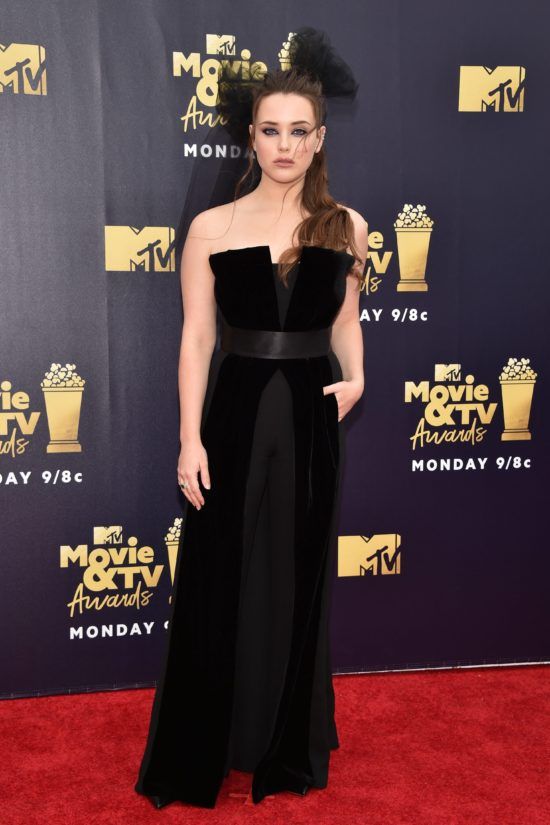 Instagram star and actress Arielle Vandenberg appeared on the MTV red carpet wearing this sleek and sparkly navy gown! We love the sheer cutouts on the dress, but the strange shoulder pads and constricting shape of the dress made this look come across a little awkward and uncomfortable. 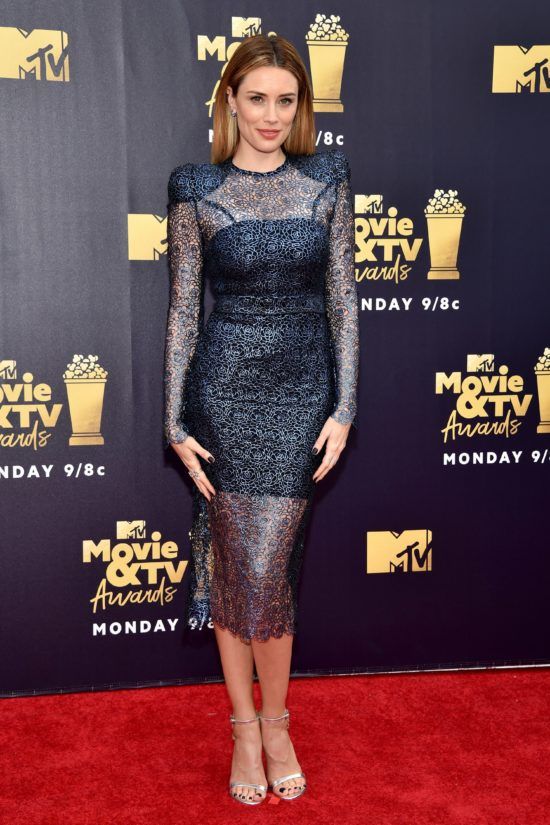 Yara Shahidi stepped out wearing a powder blue suit combo for this year’s MTV TV & Movie Awards red carpet. Shahidi is typically a red carpet all-star, which is why we were quite disappointed with this look. We love the idea of the baby blue suit, but the pants seemed to be too long and drowned her figure. 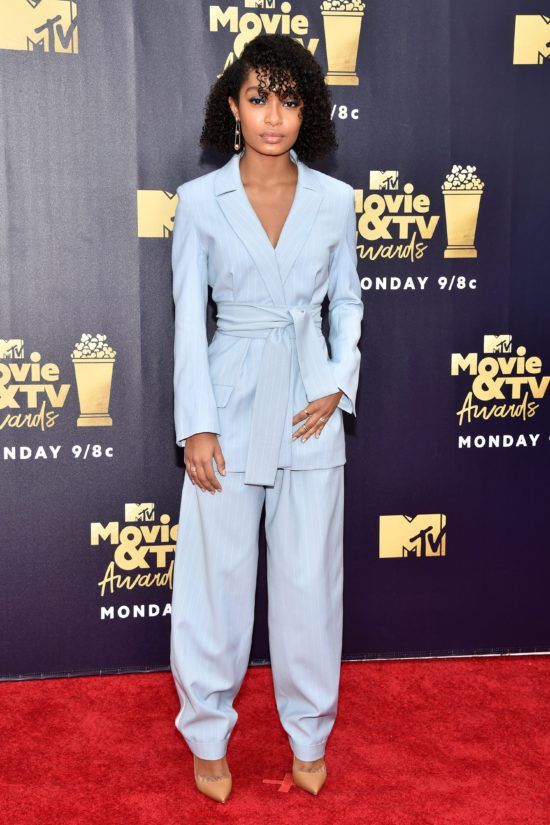 Stranger Things star Dacre Montgomery brought his girlfriend Liv Pollock onto the red carpet for the MTV Awards this year. Although she is seriously stunning, we couldn’t overlook her outfit choice. The white crop top and skirt combo was super revealing and left little to the imagination. 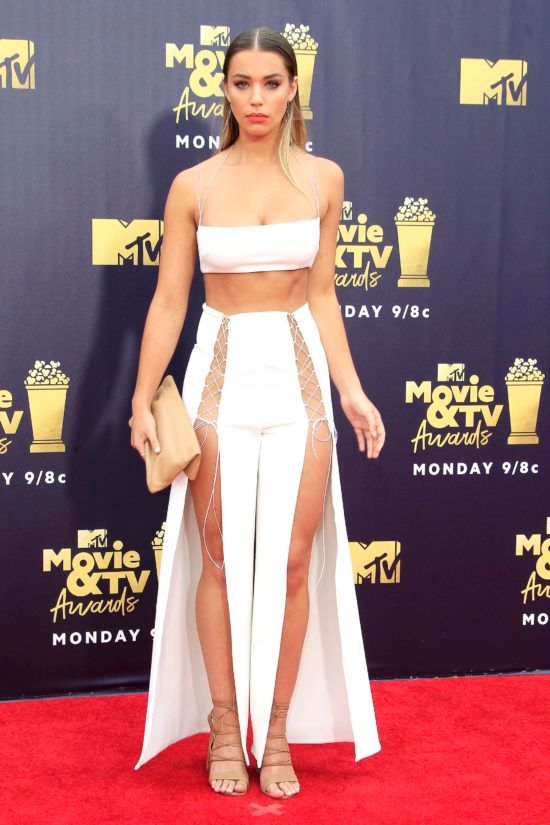 Kelsey Asbille Chow attended the MTV awards this year wearing this pink look which we think would have been much better suited for the beach than a red carpet event. The sheer number bared all her undergarments and not in a good way! 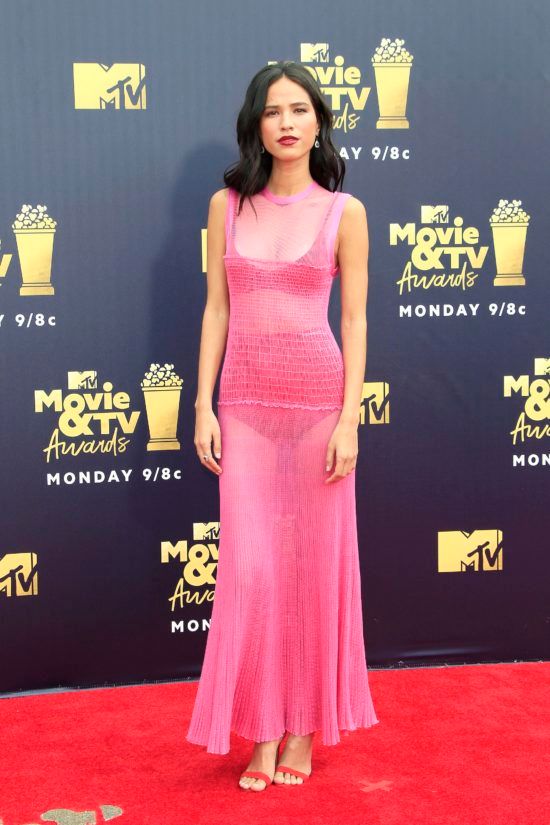 American rapper Justina Valentine attended the MTV Movie & TV Awards wearing a completely sheer outfit that was definitely one of the most unfortunate fashion moments of the evening. The look bared way too much skin for comfort! 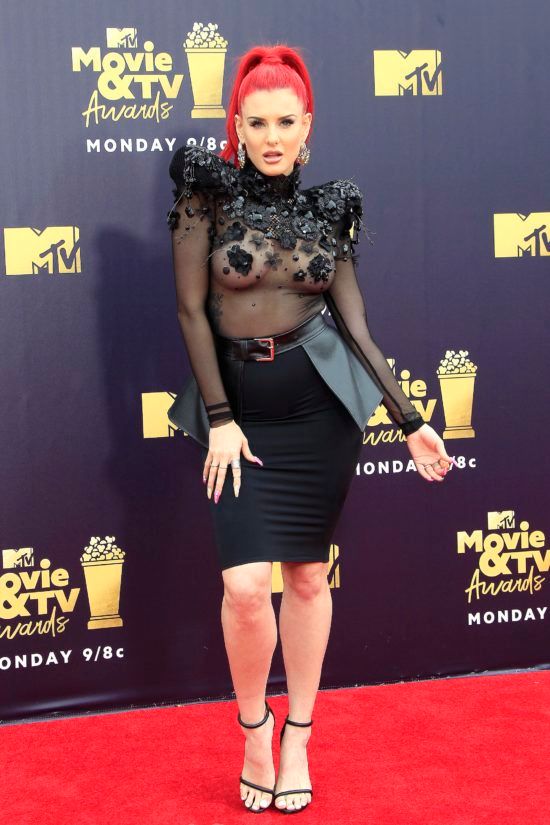 Model Jasmine Sanders attended the MTV Awards show wearing this bright yellow belted dress! Although the dress itself is actually quite chic, the fact that she wore sunglasses on the red carpet really detracted from the overall look. Accessories can make or break a red carpet moment, and unfortunately, for this look, it was the latter option! 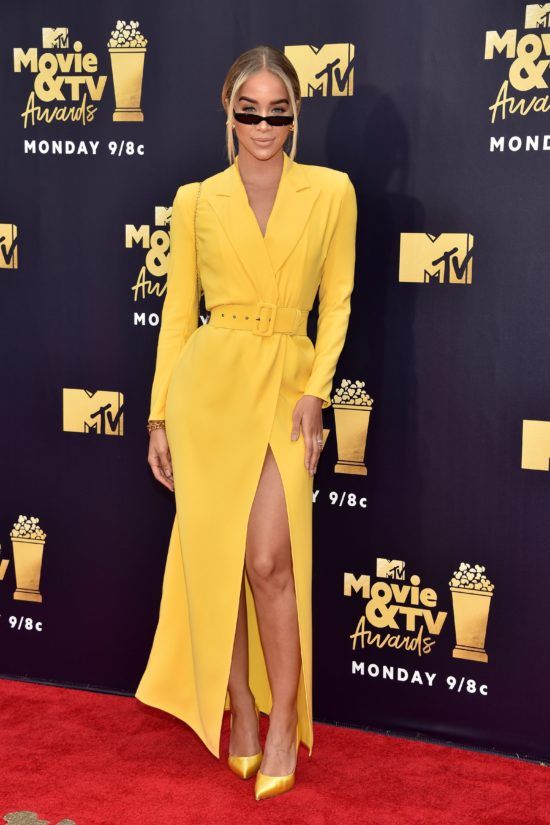 Riverdale star Camila Mendes had quite the fashion mishap on this year’s MTV red carpet. Her look featured awkward lace cutouts in unflattering places and featured too much texture and pattern. The ensemble was quite busy and we would have much preferred for her to opt for something more simplistic. 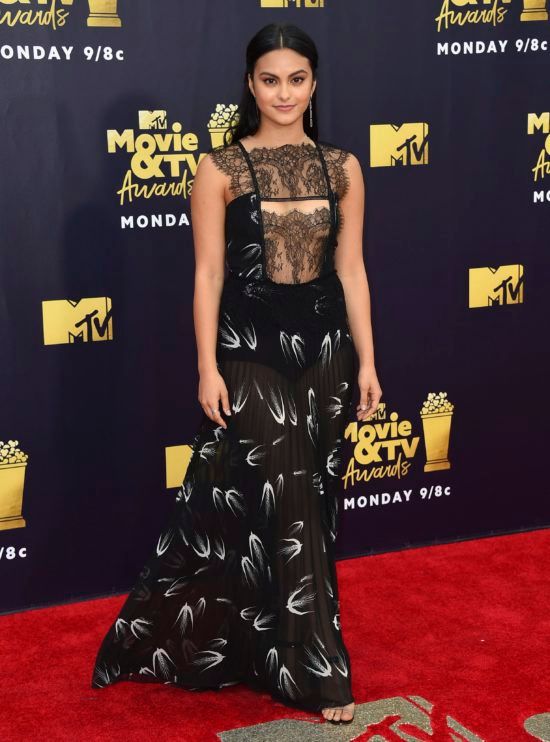 Madelaine Petsch was another Riverdale star who had a fashion mishap on the MTV red carpet. Petsch opted for this sparkly pink look that seemed much better for prom than a red carpet event. The combination of sparkles and pink did not work in her favor! 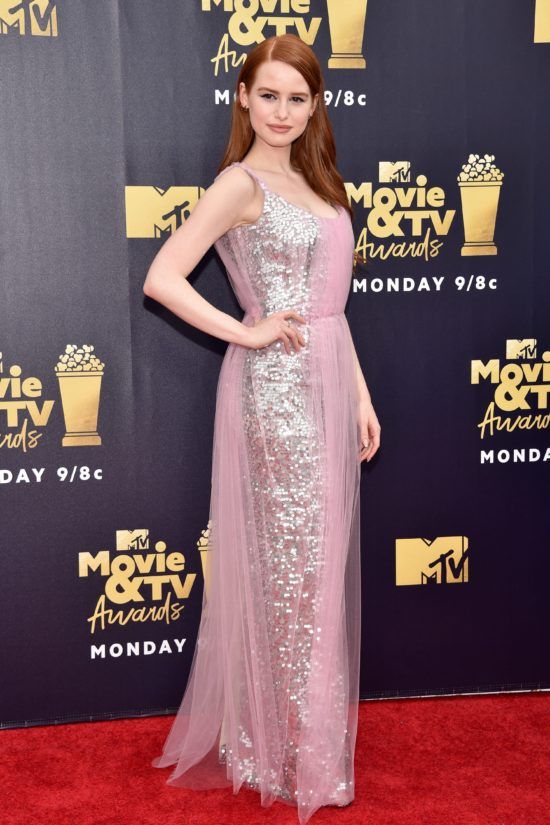 Actress Tessa Thomspon seemed to drown in this flowy red number on the MTV red carpet! The look featured ruffles, tiers, and layers in all the wrong places and did not flatter her figure. As much as we love the crisp scarlet color of this look, the shape of the dress did not seem to work. 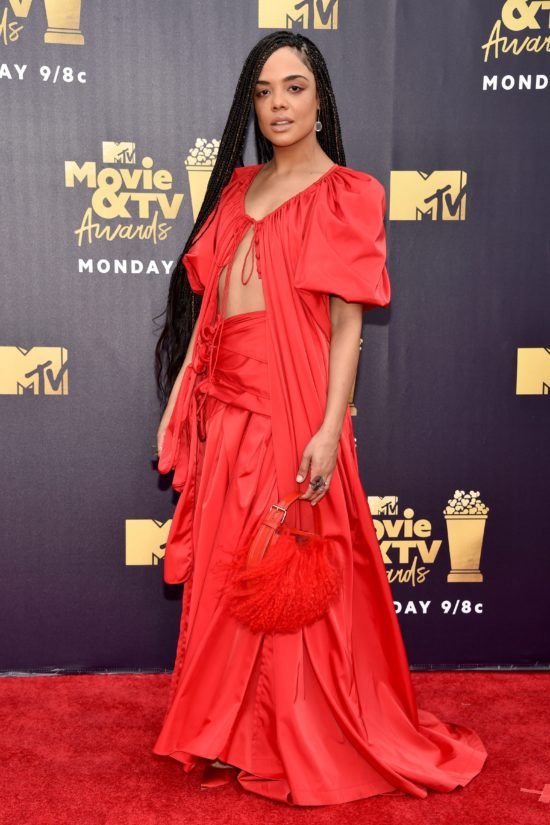 Actress Francia Raisa opted for a one-shoulder jumpsuit on this year’s MTV red carpet. We can definitely get behind a little-black-dress situation on the red carpet, but this sparkly, ruffled number definitely missed the mark. The skintight jumpsuit came across awkward with the sequin texture, but even more so because of the oversized ruffle that trailed down one side. 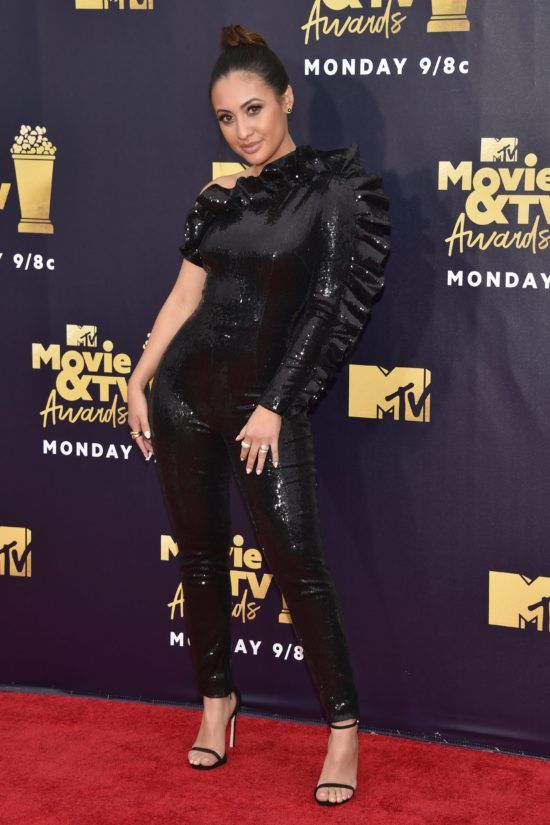