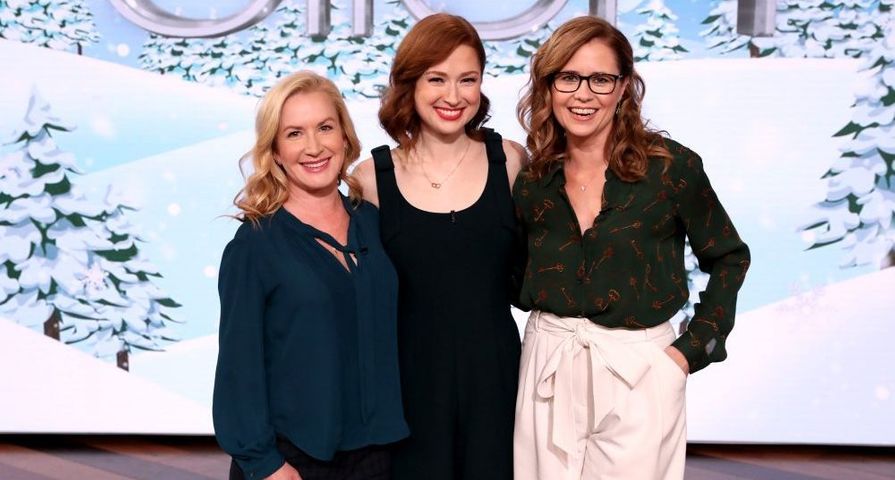 On Monday’s episode of The Ellen DeGeneres Show, The Office star Ellie Kemper will be taking over hosting duties.

Kemper, the star of Unbreakable Kimmy Schmidt, is now a pro at hosting – this is her third time appearing as a guest host for the show.

The actress welcomed her former The Office costars, Jenna Fischer and Angela Kinsey for a mini-reunion.

The trio talked about how Fischer would make ornaments with the cast picture to give out at Christmas but stopped doing so around season five because she thought people were getting sick of them.

“I saved them all,” Kinsey said. “I have a lot of photos of myself on the tree, thanks to you.”

The Office alums also couldn’t believe the popularity of the iconic NBC show has risen over the last couple of years.

“I was at the airport and there was a really cute girl in a jumpsuit. Like a big boxy jumpsuit, it was sort of an odd fitting jumpsuit and she came up to me and was like ‘I love ‘The Office’ can we take a picture’,” Kinsey recollected.

“My Instagram went crazy because this girl named Billie Eilish posted a picture of her and I. She was so sweet,” she added, while admitting that she no clue who Eilish was.

“I’m a dinosaur, but I Googled her and she is fantastic. A very talented young lady.”

Fischer also commented that she had no idea who the singer was either.

After reminiscing about the old days, Kemper then asked about the one question that was on everybody’s mind: will there be an Office reboot?

“I would not do an Office reboot but I would love to do a reunion special,” Fischer answered the actress. “I would like to get us all together again.”

Kinsey commented, “I would do anything they would call me to do!”

“I’m with you, Angela!” Kemper agreed.