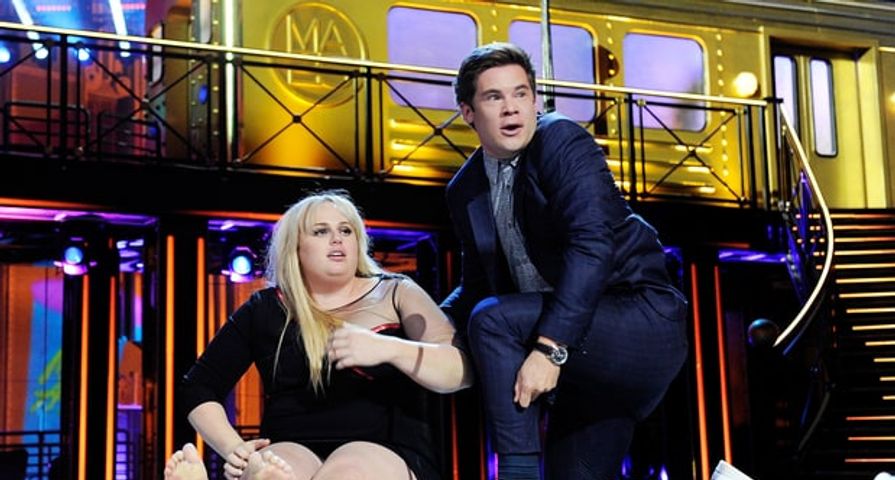 The MTV Movie Awards aren’t really like the other awards show.

Much like the MTV Video Awards, really anything can happen and the whole event is much more wacky and fun than what is expected from the Golden Globes and Oscars. Every year one of the most anticipated awards is Best Kiss, and there was some serious competition with on-screen couples like Amy Schumer and Bill Hader, Ryan Reynolds and Morena Baccarin, Dakota Johnson and Jamie Dornan, and Rebel Wilson and Adam DeVine were all up for the award.

After Wilson and DeVine won for their kiss as Bumper Allen and Fat Amy in Pitch Perfect 2, the comedic pair took to the stage to accept, with Wilson stating, “It’s quite incredible we won this award because, in real life, we have absolutely no sexual chemistry.” DeVine then added, “I’m not turned on by her soft, pillowy lips,” and Wilson replied, “I’m not aroused by his tight Cabbage Patch face and his tight little butt.”

The two then engaged in not just a kiss, but a sloppy raunchy makeout session that had them rolling around on the floor and had Wilson flashing the crowd as her dress rode up.

The Pitch Perfect 2 stars also took home the win for Best Ensemble Cast while Star Wars: The Force Awakens was also a big winner of the night!

Check out Wilson and DeVine’s hilarious acceptance below!