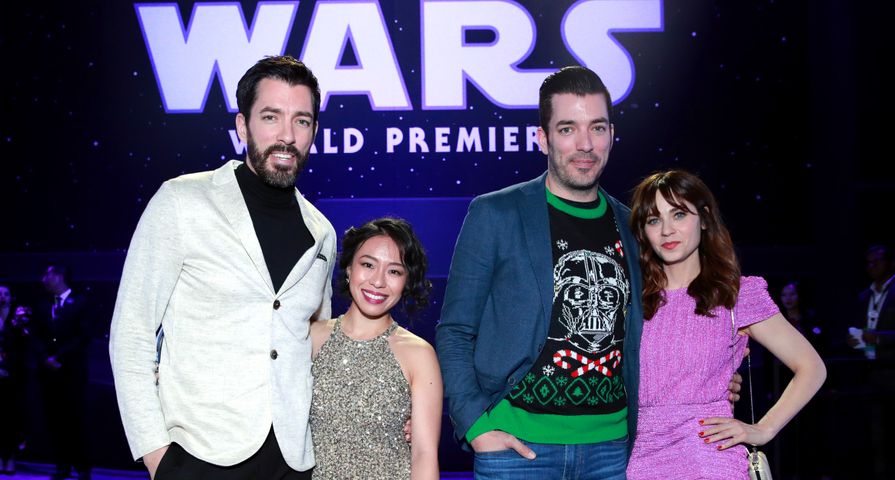 Property Brothers star Jonathan Scott and Zooey Deschanel attended the premiere of Star Wars: The Rise of Skywalker alongside Drew Scott and his wife Linda Phan.

All four stepped out on the blue carpet outside the El Capitan Theater in Hollywood, California, on Monday night to show off their poses before watching the highly anticipated installment of the franchise.

“We let our inner children out to place this evening…and what a great time they had. Loved the movie!” Jonathan captioned the double date post.

Drew sported a black turtleneck underneath a cream-colored blazer, while Phan donned a silvery high-necked dress and a classic up-do hairstyle.

Jonathan and Deschanel, who began dating in September, posed together with smiles as Scott wrapped his arm around the New Girl star’s waist, while she posed with a singular hand on her hip.

Their double date night comes less than two weeks after Deschanel brought him on stage with her as she kicked off her Very She & Him Christmas Party tour in Philadelphia. The actress is one half of the music duo She & Him with M. Ward.

Jonathan has joined Deschanel on numerous stops throughout her tour, and last week proved that he is the perfect Instagram boyfriend by sharing backstage footage from her Oakland, California show.

The HGTV star also shared a selfie from the show on Instagram, captioned with, “Supportin my girl. Thank you Oakland for supporting @sheandhim. LA…you’re next. #melekalikimaka.”

The pair met on the set of Carpool Karaoke over the summer and instantly hit it off, a source reported to Us Weekly. “Jonathan and Zooey had instant chemistry when they met on set,” a source told the outlet. “They’ve bonded over their love of music, film, theatre – and Christmas carols.”

The source added that the pair “have a similar sense of humor” and “became friends and started texting and talking on the phone and it blossomed from there.”

The couple revealed their relationship to fans on Instagram in October. Deschanel posted a picture of her and Scott at Universal Studios Hollywood’s Halloween Horror Nights and featured Drew Scott (Jonathan’s twin brother) and his wife, Linda Phan.

Also at the end of October, the actress shared with her fans she was “overjoyed” as she joined Scott at the Halloween-themed wedding of his eldest brother, J.D. Scott, to Annalee Belle.

We let our inner children out to place this evening…and what a great time they had. Loved the movie!