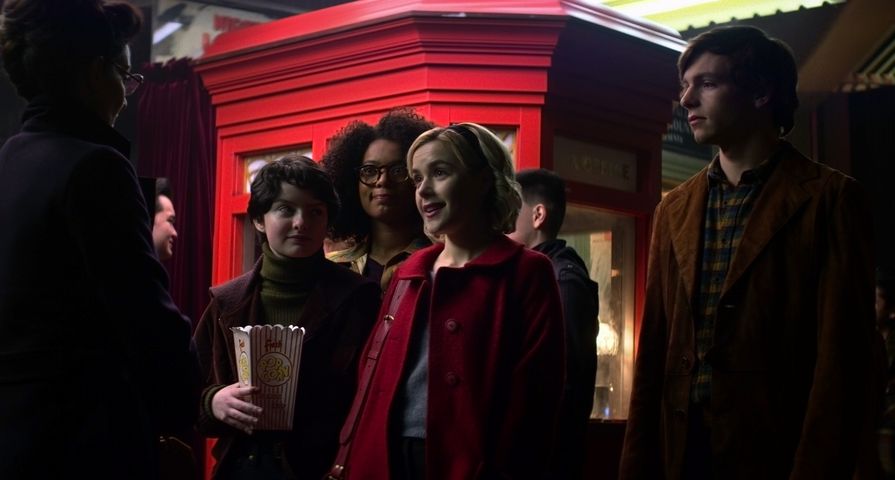 These aren’t the Sabrina characters you remember!

As Netflix ramps up for the premiere of the Chilling Adventures of Sabrina on Friday, October 26, the streaming giant is releasing more and more about what to expect from the anticipated new series and now the first look at the cast as their characters has been revealed!

So far, Netflix has released small sneak peeks of Kiernan Shipka as Sabrina Spellman the new photo shows Sabrina surrounded by friends seemingly confronting another character, and it is no secret that Sabrina is going to be a lot more tough and darker than the Sabrina audiences might remember! Her character description reads: “Sabrina Spellman is an empowered young woman, half-human, half-witch, Sabrina is just beginning her dark education as a sorceress, even as she tries to maintain a normal life as a sophomore at Baxter High. Intelligent, compassionate and brave to the point of recklessness, Sabrina is all that stands between us and the forces of darkness that threaten our world.”

Up next, is another very important character to Sabrina’s journey, her love interest Harvey Kinkle who is played by Ross Lynch. He is “Sabrina’s boyfriend. The prince charming of this dark fairy tale, Harvey is the son of a coal miner, a dreamboat and a dreamer, completely unaware of the dark forces conspiring to keep him and Sabrina apart.”

Then, there are the Weird Sisters: Agatha, Prudence, and Dorcas played by Adeline Rudolph, Tati Gabrielle, and Abigail Cowen, who make up “a trio of powerful, uncanny teenage witches at the Academy of Unseen Arts who look down their noses at Sabrina for being half-mortal.”

Of course who would Sabrina Spellman be without her aunts including Hilda Spellman portrayed by Lucy Davis. Hilda “is one of Sabrina’s two witch aunts. More nurturing than Zelda, Hilda’s motherly nature and warm sense of humor belie a wicked, ghoulish streak. She is as adept at brewing spite jars against her family’s enemies as she is at concocting love potions for the students at Baxter High.” Meanwhile Zelda Spellman will be portrayed by Miranda Otto. Zelda “is Sabrina’s sterner witch aunt. Proud and devout, Zelda believes there is no greater honor than serving the Dark Lord as a member of the Church of Night. She is the family’s disciplinarian, fiercely protective of Sabrina, and very much Cain to Hilda’s Abel.”

The character reveals also introduce Richard Coyle as Father Blackwood, the High Priest of the Church of Night and Dean of the Academy of the Unseen Arts who “hides a terrifying dark agenda.” As well as Gavin Leatherwood as Nicholas Scratch a young and handsome warlock at the academy who might spell competition for Harvey.

Sabrina’s closest friends Rosalind Walker and Susie Putnam will be portrayed by Jaz Sinclair and Lachlan Watson, who both have as interesting backgrounds as Sabrina herself.

Michelle Gomez will star as Mary Wardwell, Sabrina’s favorite teacher at Baxter High who gets possessed by the Devil’s handmaiden and becomes Madam Satan.

Lastly, Chance Pedormo will play Ambrose Spellman, Sabrina’s cousin from England who is a warlock. “Placed under house-arrest by the Witches Council, Ambrose is forbidden from leaving the funeral home where he lives with the Spellman woman. Witty, puckish, and pan-sexual, he is one of Sabrina’s partners in crime, always up for mischief.”

Check out the cast reveal:

Ahead of the premiere, here is everything you need to know about The Chilling Adventures of Sabrina.