The duo stole the show when they stepped out of the car in the pouring rain which made for some iconic photos. They had smiles on their faces and appeared in good spirits despite the weather and their impending exit as senior members of the royal family.

For the occasion, Meghan opted for a turquoise blue dress by Victoria Beckham and styled her hair in a low, sleek ponytail. Harry coordinated with Meghan by wearing shades of navy blue for his own look.

During the special event, both Meghan and Harry made speeches addressing the crowd. Harry spoke directly to fellow veterans by saying, “I feel incredibly lucky to be able to count myself as one of you, and I’m deeply proud to have served among you as Captain Wales,” he said. “A lot of you tonight have told me you have my back. Well, I’m also here to tell you, I’ve always got yours.”

Meghan also spoke during the event and made brief remarks before announcing the winner of the Celebrating Excellence Award. “Good evening everybody — it’s very nice to be back. It’s the third year that I’ve had the incredible fortune of joining my husband here, and as you all know and can feel it is just the most inspiring space,” she said. “I will say when we were watching the videos all the way in Canada, we had the same moment as we do each year, which is how are you going to choose?”

She added, “So, we’ve done our best and I’m very pleased to announce the winner, who is Lee Spencer.”

The Endeavor Fund Awards marks one of Harry and Meghan’s last official royal appearances before they step down from their senior roles in the royal family on March 31st.

Check out more photos of the evening below: 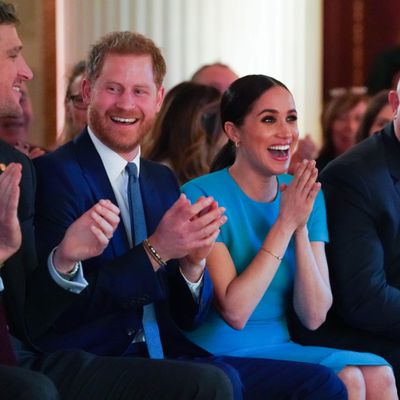