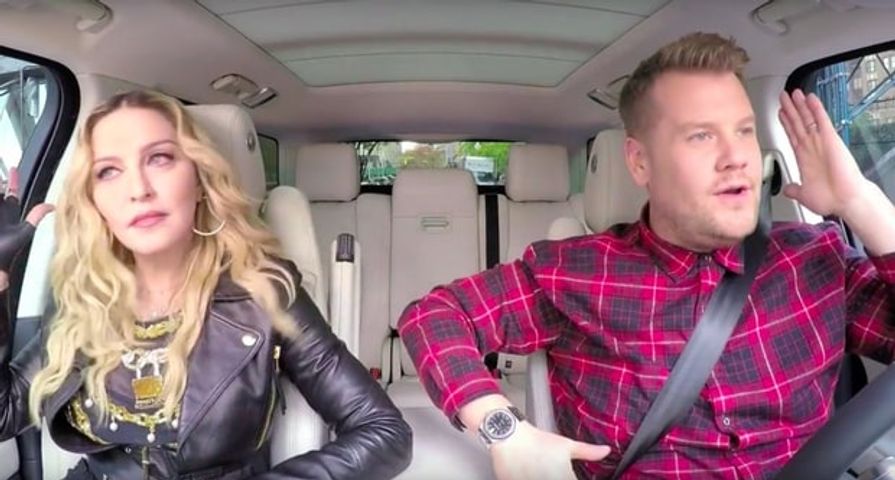 It goes without saying that even before Madonna’s segment of Carpool Karaoke with James Corden on The Late Late Show aired, fans knew it was going to be one of the craziest ones yet!

The Queen of Pop joined Corden on the Wednesday, December 7th episode of the show, and it started off with drama as the pair got cut off by a Manhattan bus. “Let’s drive up next to the bus. I want to give him what’s what,” Madonna told Corden before calling him a “p–sy,” adding, “You let people get away with bad behavior, they’re gonna do it again.”

Instead of continuing with the road rage, the much calmer Corden suggested the pair listen to some music, and the two began the karaoke starting with “Vogue” and then “B–ch I’m Madonna.” The two then had an interesting discussion about nuns and being excommunicated by the Vatican which led to the singing of “Papa Don’t Preach,” “Don’t Cry for Me Argentina,” and “Express Yourself.”

Corden then brought up the subject of men and marriage and asked Madonna what it was like to hang out with the late Michael Jackson to which she slyly replied, “You want me to kiss and tell then, don’t you?” and admitted she had kissed Jackson, stating, “Baby, I’ve been around.”

Check out the whole wild ride for yourself below: