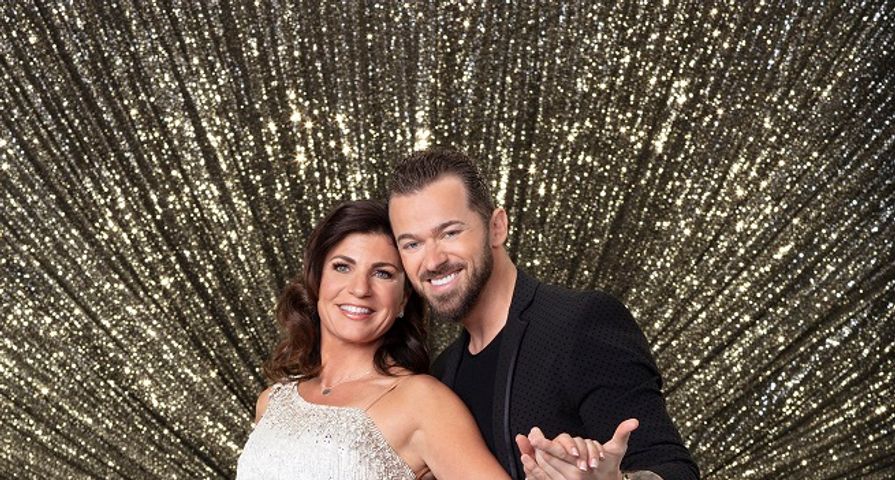 Season 27 of Dancing With the Stars is returning the show to the series that fans know and love after a shortened season with season 26’s Dancing With the Stars: Athletes in the spring, and with a celebrity cast stocked full of actors, singers, athletes and more, the competition is going to be tough.

As always, this season is going to dive deeper into the lives of the stars, including Paralympic skier Danelle Umstead who is taking on one of her toughest challenges yet as she trades in the difficult terrain of the alpine ski slopes for the flat surface of the dance floor with her pro partner Artem Chigvintsev.

Ahead of the new season, Fame10 chatted with Umstead who is making history as Dancing With the Stars’ first visually impaired contestant after losing her eyesight at a young age due to a genetic eye condition called retinitis pigmentosa. While she may have already seemingly achieved the impossible by not only courageously taking on her condition, but becoming a celebrated Paralympian and also facing the challenge of being diagnosed with multiple sclerosis, she says Dancing With the Stars has “challenged me more than I think I’ve ever been challenged.” Of course impossible isn’t a word that hinders Umstead, instead it motivates her as her life motto is “live your impossible everyday,” and it is safe to say she is doing just that this season as she reveals her Dancing With the Stars journey actually began more than 10 years ago!

“I put it out there in 2007, I just threw it out into the universe when I was watching the show for the very first time. I was standing four inches away from the television screen because I couldn’t see it. I was watching Dancing With the Stars and I said ‘I want to be the first blind contestant on Dancing With the Stars.’ So, I threw it out into the universe, and when I got the call and asked if I wanted to be on the show, here, for season 27, I was like ‘Oh my gosh, I’m the first visually impaired blind contestant.’ And they were like, ‘yes, you would be.’ And I’m like, ‘Wow, I threw this out to the universe and it came back to me,’” she shared with Fame10 about how she came to be on season 27.

Of course, things are always much different than what you expect and she added, “It was something that I wanted really bad and I’ve always watched the show and thought it’s pretty amazing how they can teach somebody how to dance that’s never danced before, but I don’t think I truly ever understood the visual part of dancing. So, what I thought I was signing up for was much more than what I thought I was signing up for. There are a lot of details to dancing and a lot of things that I was not aware of before doing any dancing. I’m learning a lot and being challenged more than I think I’ve ever been challenged and that’s kinda funny coming from a blind visually impaired alpine ski racer but I am just so challenged on such a different level.”

Of course, always by Umstead’s side is her beloved guide dog Aziza, who has helped transformed Umstead’s life since entering her life back in 2013, six months after Umstead’s first guide Betty Lynn retired. As Umstead explained getting a dog guide didn’t only let her explore the world in a different way, it helped her find independence, and changed her social life. “I used to get around with a cane and I named my cane John because every time I pull my cane out I feel like people run from me like I was some kind of crazy creature, but as soon as I got a guide dog it was so welcoming to have people come up to me because I love interacting, I love talking, and I call myself a social butterfly. People who love dogs wanna help me and they want to be introduced to my dog and they have given me that independence back because I can’t look at people and be like, ‘oh, I’m going to go talk to that person and tell them their shoes are cute or their dress is great.’ So, my dogs bring people to me where I can have conversations that normal, visual people could have with strangers, and I love that.”

As such a major part of her life, Umstead joked she is also going for the “dog vote” on Dancing With the Stars as Aziza is definitely going to be front and center, and might even make her way into a dance! “Aziza is always there with me on the dance floor. She is always watching Artem and I practicing, and we’re hoping to get her in the show probably not the first dances, but we’re hoping to do that and I think we can get the dog votes too with all the dog lovers out there and everyone seeing Aziza.” While Aziza might not hit the dance floor until Umstead hopefully makes it a few weeks in, she will still be supporting Umstead on the sidelines with the other important people in the Paralympian’s life. “I did ask, because she’s been watching every rehearsal, if she could be in the audience with my husband and son watching, she’s in every rehearsal, she shouldn’t miss out.”

Of course, Umstead may be an incredible athlete with commitment, passion, endurance and unbelievable dedication, but that doesn’t mean Dancing With the Stars is coming any easier to her. Although Umstead’s husband, Rob, acts as her guide on the ski slopes and Aziza is her guide through every day life, she is still working on building the trust with Artem as her guide on the dance floor. “Trust doesn’t come over night, it has to be earned. Rob, even though he is my husband, it has taken years for me to trust him on the level of trust that we have. I mean it’s built over time. I am finding Artem and I are going through a lot of things in a very short period of time and that trust is building too. I am learning to trust him everyday but people might assume that it is super easy because I have a guide dog and I trust my guide dog, but that took a long time too,” Umstead explained. “Sometimes I question what she is doing still. It could be right, or it could be wrong,” she joked.

“It is just something that evolves over time and is always continuing and I truly believe as an athlete and as my guide dog that having a healthy mind and eating right and exercising right, and Aziza having her Natural Balance, and me having the right foods and us always being on the same page, is something we practice all the time. With Artem I am still learning the way he is, the way he works and seeing who he is everyday and seeing how he reacts to life and everyday things…it’s so different. And we go off together and talk about it but we are on camera all the time building this trust in front of America. I mean it is happening, a lot of stuff has happened in time but it’s not like what I have with my guide dog or with my husband that’s for sure.”

Of course, the more practice the pair have, the more trust that is built, and for right now Umstead says being visually impaired might actually be aiding in her in one facet of the show: she doesn’t feel the pressure of the cameras following her every move.

“I think that until it becomes reality that it has been on camera…I am so blind I don’t really know the cameras are there and half the time I am like ‘whoops.’ So, I think it will be super real the first couple of weeks once I start hearing the things I’ve been saying or doing, I’m gonna be like ‘oh, I better be better than that.’ I think that blind part of me might be a better thing that I just don’t see them constantly looking at me. I think I am okay with that part right now.”

Tune in to see Danelle take the stage as Season 27 of DWTS premieres tonight on ABC.