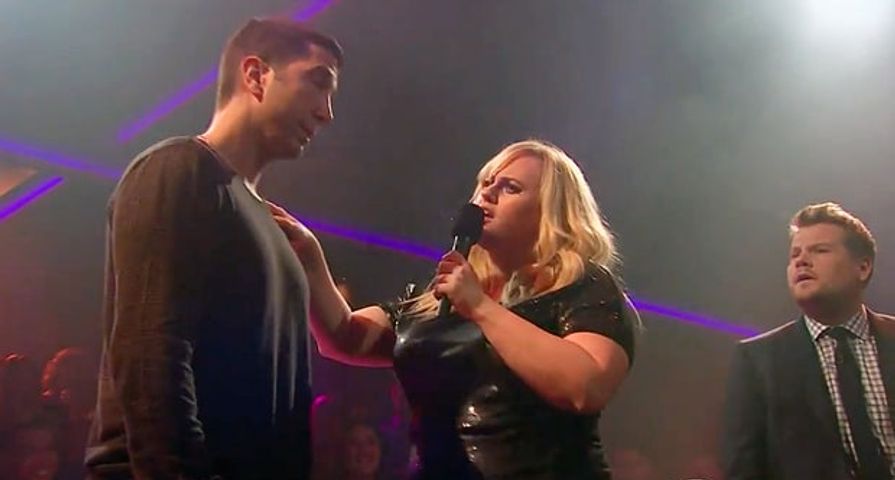 Things went down on last night’s The Late Late Show with James Corden. The host faced off with former Friends actor David Schwimmer in an epic rap battle in which neither man’s dignity was spared.

James Corden opened the battle by making fun of Schwimmer’s status as a has-been actor. “Let me introduce you to this guy, his name is David, he was famous in ’95,” Corden rapped. He ended his first round with: “Now you’ve got a chance to prove you’ve got balls, while I ignore you like Jennifer Aniston does your calls!”

Schwimmer didn’t hesitate to fire back at Corden’s insults. “A Brit in America’s your one claim to fame. We all know as an actor your roles were all the same.” The crowd cheered when Schwimmer fired off this rhyme: “Did you think I’d be scared, walk around gingerly? When everyone knows your middle name’s Kimberly?”

But just when we thought it couldn’t get better, Rebel Wilson entered the house and dropped the mic, literally. She walked smugly over to Schwimmer and rapped, “David, your career, it’s a huge mistake. It’s like Ross and Rachel: it’s on a break.” To James she rhymed, “Carpool Karaoke, you think it’s your big thing. But everyone is thinking, ‘Shut up and let Adele sing!'” She was the clear winner of the night.

See the rap battle video below: