Home » Trending News » Dancing With the Stars Season 28 Week 8: The Judges Give Out Two Perfect Scores

Dancing With the Stars Season 28 Week 8: The Judges Give Out Two Perfect Scores 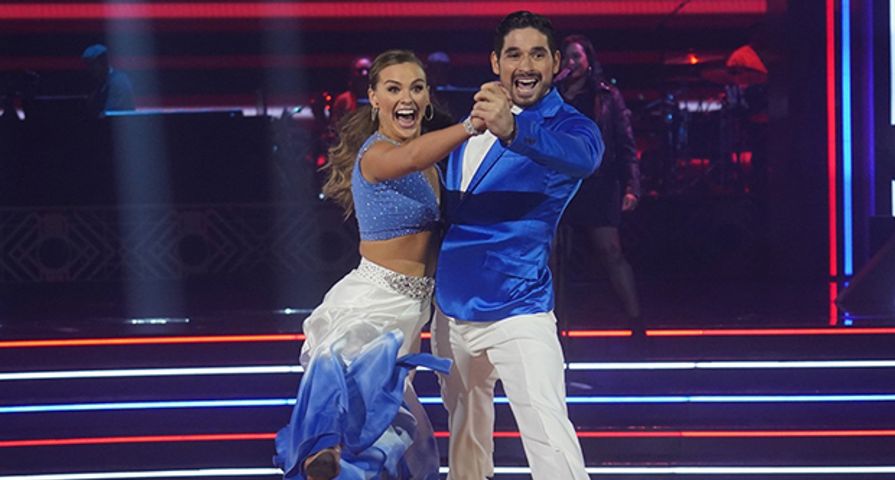 Week 8 of��Dancing With the Stars featured not just one – but two perfect scores!

This week, Sean Spicer danced with Jenna Johnson (due to Lindsay Arnold’s mother-in-law passing away), and two they performed the awkwardest jazz routine to Styx’s “Come Sail Away.” The choreography and the music didn’t seem to sync up for the pair either. “We keep throwing you out of the boat and the viewers keep throwing you a life-preserver!” said Goodman. “That’s true,” joined Carrie Ann Inaba. “I think Dory in Finding Nemo has better direction but you always manage to get to shore,” added judge Bruno Tonioli. Inaba also said to the pair, “Sometimes it looks like you are doing the same dance over and over again. That’s why your scores haven’t improved. Learning to dance with someone else has given us another shade of you.” The pair scored 20 out of 30 points.

Country star Lauren Alaina seemed like she couldn’t keep up with her partner Gleb Savchenko as the two performed a jive routine. Alaina held back her tears at the judges’ critique of the performance. “You did forget, something went wrong there,” Inaba commented. “Even though you’ve had a setback here … don’t give up.” “The competition is getting so intense now,” Goodman added. “There were mistakes.” The star and her partner scored 24 out of 30 points.

Kate Flannery wanted to dedicate a dance to her sister who recently passed away, the judges responded well to Flannery and Pasha Pashkov’s super fun jive dance. “Dance is a celebration of life and I felt that celebration,” remarked Inaba. “I’m so proud of you.” “It was tailor-made for your ability. It allowed you to play the steps,” added Tonioli. “As always, charming.” Flannery and Pashkov scored 24 out of 30 points.

Fans and judges were blown away by Kel Mitchell and Witney Carson’s salsa dance the pair performed this week. “You took me way back, the way you went back and forth getting the cool groove … you are leading!” said Inaba. “You are pushing her back and forth!” “Wow Kel, my old sausage you are on a roll,” commented Goodman. “Full of rhythm, plenty of junk in the trunk. Those hips were going to town. You were large and in charge.” The duo received their first 10 of the season and scored a 28 out of 30 points.

Hannah Brown, the Alabama pageant queen, really brought it on this week with her partner Alan Bersten who quickly mastered the quickstep and blew away the judges. “Tonight you really used the floor to give you lift and spring,” commented Tonioli. “It felt like you. That’s what we are talking about! You are open-hearted every time you come on this dance floor,” exclaimed Inaba. The pair very nearly earned a perfect score but settled for a 29 out of 30.

Ally Brooke and Sasha Farber’s Paso doble featured an insane floor spin at the end that had everyone in the room clapping and cheering. “It was a mix of good technique and high performance,” stated Goodman. “Well done.” “You are a frickin’ superstar!” continued Inaba. “Something has shifted in you. My mind is blown.” Brooke and Farber scored a perfect 30 out of 30 – making them the first pair to receive a perfect score!

James Van Der Beek performed a one-armed cartwheel and lift in contemporary dance with partner Emma Slater. The judges thought the pair pulled off their routine flawlessly that they gave the pair a perfect score – another 30 out of 30 points! “You did a section of lifts there that was absolutely exquisite,” remarked Tonioli.

After the usual dance routines, it was time for the dance-offs! Kel and Whitney and Hannah and Alan received an additional two points from their dance-off performances with Ally and Sasha and Lauren and Gleb, who respectively lost.

Fans and judges were still shocked to see that this week’s two bottom couples included Kate and Pasha and Ally and Sasha. “It’s confusing for me why these are the bottom two,” said Inaba. “You shouldn’t be here,” said Tonioli in agreement.

Unfortunately, it was Kate ad Pasha’s time to exit the stage, but the star held her head up high!